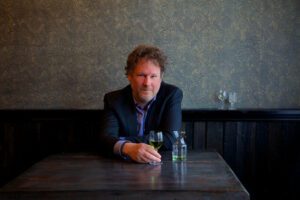 Jeff performed on stage for Seriously Entertaining at Joe’s Pub at The Public Theater on February 7, 2023, speaking on the evening’s theme, “Never Say Never.”

During the past decade Jeff Gordinier has covered the world of food — as a reporter for The New York Times from 2011 to 2016, and as the food & drinks editor of Esquire magazine from 2016 until 2021. Over the years he has also covered movies, music, poetry, and politics — and has contributed to publications such as Entertainment Weekly, Fortune, Outside, Elle, Details, Travel + Leisure, Departures, Breathe, Real Simple, Air Mail, the Los Angeles Times, and the website of the Poetry Foundation.

Jeff is the author, most recently, of the 2019 book Hungry: Eating, Road-Tripping, and Risking It All with the Greatest Chef in the World, a portrait of chef René Redzepi of Noma in Copenhagen. He has appeared in the Jeong Kwan episode of the Netflix series “Chef’s Table” — an episode that won a James Beard Foundation award in 2018 — and in Phil Rosenthal’s Netflix series “Somebody Feed Phil.” Jeff has taught food writing at Drexel University in Philadelphia, has curated culinary and literary events for the Kaatsbaan cultural center in New York’s Hudson Valley, has published (with co-editor Marc Weingarten) a collection of essays about women in music (2015’s Here She Comes Now), and is currently developing projects for television. He lives close to the Hudson River with his wife, Lauren Fonda, and his four children.