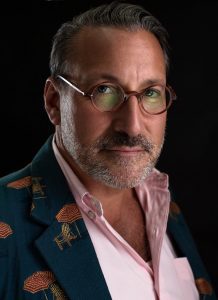 Chip performed on our virtual stage for Seriously Entertaining on March 1, 2020, speaking on the evening’s theme, “As Good As Gold.”

Chip Kidd is an award-winning graphic designer and writer in New York. His groundbreaking book jacket designs for Alfred A. Knopf have elevated the form for close to three decades. He’s worked with hundreds of writers, including John Updike, Katharine Hepburn, Cormac McCarthy, Henry Louis Gates Jr., James Ellroy, Karen Russell, Michael Crichton, David Sedaris, Sharon Olds, Orhan Pamuk, Paul Simon, Neil Gaiman, and Haruki Murakami. His first novel, The Cheese Monkeys, was a national bestseller. His most recent book, Go: A Kidd’s Guide to Graphic Design, is the first book to teach graphic design to children and has over 60,000 copies in print. As an editor and art director for Pantheon Graphic novels, he’s worked with and published some of the very best cartoonists in the world, including Chris Ware, Art Spiegelman, Dan Clowes, David Mazzucchelli, Charles Burns, Michael Cho, and Alex Ross. He is the recipient of the National Design Award for Communications, and his TED Talk has been viewed over 1.6 million times.