Meet the new year, same as the old year. Wouldn't it be nice to go a month or two w/o anything too horrible happening? 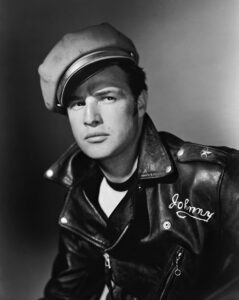 Marlon Brando in a promotional still from The Wild One (1953)

Dan Chiasson on Marlon Brando… “Anyone who has tried to recapture the magic of a joke by retelling it has felt, in miniature, what Brando must have felt in his career.” So writes Dan Chiasson in a deft summary of what made Marlon Brando great, and then kinda not so great, in this week’s New York Review of Books. He’s writing about Susan L. Mizruchi‘s new book, Brando’s Smile: His Life, Thought, and Work (Norton, 2014), which excavates some pretty entertaining factoids along the way. Did you know that Brando was the favorite actor of the National Theater for the Deaf? “They always understood exactly what he was expressing,” writes Mizruchi. Her book, Chiasson proclaims, “is a gallant attempt to rescue Brando from the spectacle of his late career[, which was in turn] a test of whether his greatness could survive the most ingenious forms of sabotage he could devise.” This spectacle is, according to Chiasson, a response of sorts to the astonishing work the actor did earlier in his career: the early-50s triple-threat of Streetcar, Julius Caesar, and On the Waterfront; and the 1972 double-bill of The Godfather and Last Tango in Paris. “On some deep level, Brando had to know what he’d done to acting: by the sheer brilliance of his performance in On the Waterfront, he made the conflicted, sensitive male lead, funneling his rage profitably into a campaign for justice, an inevitable American trope.” His later eccentricities — the weight gain, the refusal to learn lines, the bizarre interviews (“TV became a vitrine for his vitriol”) — were an extension of the contempt he had developed both for acting and the very concept of greatness. Read more…

Holidays with family. It all comes down to activities between meals.

Short Cuts ¶ “Our governments seem to be insisting that our lives be transparent to them, while their policies remain hidden from us”: Terrifying article by David Cole about drones, surveillance, terrorism and technology, and their implications for the law, in The New York Review of Books. ¶ Dogme 95 co-founder Thomas Vinterberg‘s adaptation of Far From the Madding Crowd, starring Carey Mulligan and Michael Sheen, is look pretty sumptuous based on this trailer. ¶ Bustle has compiled a list of inspirational literary quotes designed to facilitate the keeping of your new year’s resolutions. Kurt Vonnegut, J.K. Rowling, Richard Yates, Doris Lessing… It’s here if you like that kind of thing. ¶ “The cues seem to be more Penn’s Night Moves and Altman’s The Long Goodbye rather than the highly detailed, color-drenched CGI cityscapes I was imagining while reading the book…” Bret Easton Ellis reviews Paul Thomas Anderson‘s film adaptation of Thomas Pynchon‘s Inherent Vice at The Talkhouse. ¶ …and Patton Oswalt on Willa Cather and My Ántonia in the New York Times: “it’s good to know perfection can exist in letters.” 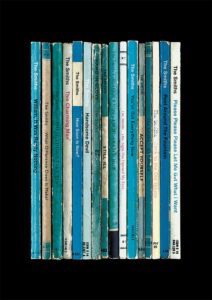 Vladimir Nabokov on Oscar Wilde… “Rank moralist and didacticist. A favorite between the ages of 8 and 14. Essentially a writer for very young people. Romantic in the large sense.” Read more…

Tom McCarthy, “On Realism and the Real”… McCarthy, a brilliant and tangential thinker, is the author of three previous novels: Remainder, Men in Space, and C, as well as an absorbing disquisition on Tintin and philosophy. In this entertaining article from the London Review of Books, he artfully skewers the common dichotomy between so-called realistic fiction and avant-garde fiction, drawing on Gustave Flaubert‘s Bouvard et Pécuchet: “That such blatant and splendid take-downs of naturalism are written into the core of the realist tradition makes the naive and uncritical realism dominating contemporary middlebrow fiction, and the doctrine of authenticity peddled by creative writing classes the world over, all the more simple-minded.” He also writes about the real (aka the Real), what Lacan labeled as “that which is unassimilable by any system of representation”; how, he seems to ask, can we expect this “roving black hole” to be digested and manifested in fiction? “Reality isn’t there yet,” he states at the outset; “it has to be brought forth or produced; and this is the duty and stake of writing.” McCarthy’s next novel, Satin Island, will be published in February.

I know I'll never be able to keep to my resolution to be more positive.

And finally, as American readers await the translation of Book 4 of Karl Ove Knausgaard‘s extraordinary My Struggle (Farrar, Straus and Giroux), enjoy two peaceful minutes of Knausgaard reading his own work at the New York Public Library last year: