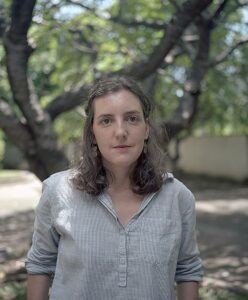 Abby performed at a SpeakTogether student matinee at Fordham High School for the Arts in the Bronx, New York on March 8, 2022, speaking on the theme, “Being and Becoming.”

Abby Seiff is an editor and journalist with nearly a decade of experience writing and reporting internationally, primarily in Southeast Asia. Her writing has appeared in Newsweek, Time, the Associated Press, Al Jazeera, Pacific Standard, and more. She served as an editor for several years at The Cambodia Daily and The Phnom Penh Post, and has worked as an editor for Foreign Policy, Devex, New Humanitarian, and ChinaFile, among others. She has written on topics as disparate as child marriage in Nepal, Khmer Rouge war crimes, and underground churches in Vietnam. Her first book is Troubling the Water: A Dying Lake and a Vanishing World in Cambodia.