How Star Wars Conquered the Universe: Five Things We Learned 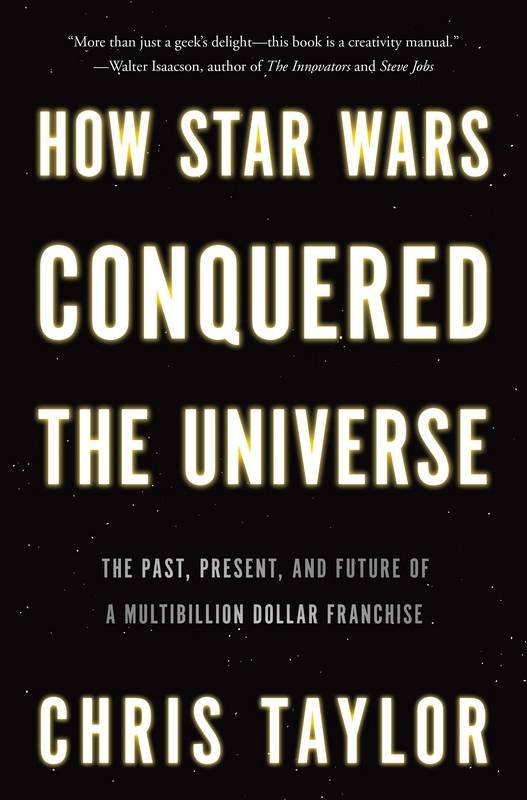 How Star Wars Conquered the Universe: The Past, Present, and Future of a Multibillion Dollar Franchise

Star Wars Episode VII has a title — The Force Awakens — as you can’t have failed to notice if you switched on the internet last week. Great timing, as I spent last week taking suspiciously long lunch breaks to read Chris Taylor’s new history of the series, How Star Wars Conquered the Universe: The Past, Present, and Future of a Multibillion Dollar Franchise (Basic Books, 2014). Although Taylor is not endorsed by Lucasfilm, the Force is nevertheless strong with him. His fanboy credentials are never in doubt, even as he manages to maintain a decent editorial distance throughout. The book doubles as a partial biography of George Lucas, Star Wars‘ Creator (the biblical proper noun maintained throughout). Taylor takes us from Lucas’s childhood in Modesto, CA, a town which would serve as inspiration for his first big hit, American Graffiti (1973), to the sale of Lucasfilm to Disney in 2012 and the announcements surrounding Episode VII. Along the way, Taylor makes stops in some of the darker, less explored corners of the Star Wars universe. Here are five things I learned.

1. You can watch Star Wars in Navajo.

Inevitable, I suppose, that the first major movie to be dubbed into a Native American tongue, in this case Navajo, would be Star Wars. The new version, the brilliant idea of Navajo Nation Museum director Manuelito Wheeler, premiered in Window Rock, AZ, on July 3, 2013. Wheeler had conceived the project “as a way to nurture and preserve the Navajo language.” You can buy the DVD in Walmart, so I guess he succeeded.

Translating Star Wars into Navajo was mostly straightforward — it took only thirty-six hours, the movie being surprisingly dialogue-lite — but there were some complications. Princess Leia, Imperial Senate, and Rebel Alliance proved untranslatable into the decidedly unhierarchical Navajo language.

2. The White House has considered building a Death Star of its own. Well, in a manner of speaking.

In 2012, Sean Goodwin wrote a short article for Centives, an economics blog started by students at Lehigh University, entitled “How Much Would It Cost To Build The Death Star?” It was a fun piece, even if prospective Sith Lords were disappointed to discover it would take 833,315 years at current production rates just to mine all the steel that would be required, never mind the fact that it would also cost something like thirteen thousand times the world’s GDP to do so.

A few months later, after the blog had gone viral, a petition was posted on the White House’s “We the People” site to “secure resources and funding, and begin construction of a Death Star by 2016.” At the time, a petition only had to receive the support of twenty-five thousand signatories to trigger a White House response. And when it came, it was worth it (even if the petition technically failed). Under the heading “This Isn’t The Petition Response You’re Looking For,” the White House Office of Management and Budget proved to have not only an active sense of humor but a very detailed knowledge of Star Wars trivia and dialogue.

An adaptation of Conrad’s Heart of Darkness set in the Vietnam War was on the table in 1969 when Lucas and Francis Ford Coppola formed American Zoetrope. The concept for Apocalypse Now was later sold to Universal along with American Graffiti, which Lucas would direct in 1973. Even after Coppola had made The Godfather Part II (1974), he was insisting that his friend direct Apocalypse Now rather than he. It’s hard to imagine: a world without Star Wars as we know it, and with a version of Apocalypse Now made by George Lucas. Of course, it didn’t happen, but the two movies continued to cross paths in strange ways.

As Taylor reveals, Coppola’s epic shoot and spiralling costs on Apocalypse Now had a near-disastrous effect on The Empire Strikes Back, which, under director Irvin Kershner, also went over budget and over schedule. Bank of America, burned on Coppola’s film, withdrew its loan from Empire when Lucasfilm’s payroll hit $1 million, and it took the loan’s transferal to the First National Bank of Boston to allow Kershner to continue shooting. (The film was also upset by, of all people, Margaret Thatcher. The strength of the pound against the dollar increased off the back of Thatcher’s election, playing havoc with Lucasfilm’s accounting during their UK shoot.)

4. There’s more merch than you can shake a lightsaber at.

One of the many über-fans Taylor meets is Steve Sansweet, the president and CEO of Rancho Obi-Wan (click on the banner to visit). Located just west of Petaluma, CA, it’s a nonprofit “whose specific purpose,” according to its website, “is to serve the public through the collection, conservation, exhibition and interpretation of Star Wars memorabilia and artifacts.” Sansweet certainly has enough of it; his assistant, Anne Neumann, who has spent seven years cataloguing the first ninety-five thousand items, estimates there are at least another three hundred thousand to go. (As Taylor points out, the British Museum only displays around fifty thousand items at a time.) With Episode VII on the horizon, her task must feel Sisyphean. “It’s the large items you notice first,” writes Taylor:

the life-size Darth Vader with red lightsaber drawn (codpiece and helmet from the original costume), the original mold of Han Solo in carbonite, the larger-than-life Boba Fett, the head of Jar Jar Binks, the stuffed Wampa, an animatronic version of the Modal Nodes band from the Mos Eisley cantina, the iconic bicycle from Skywalker Ranch with lightsabers for handlebars and a Vader-shaped bell (known as the Empire Strikes Bike).

One can only imagine the insurance premium.

The depth of fan devotion to the Star Wars universe is pretty legendary, and Taylor meets many extreme exemplars of it. There’s the 501st Legion, founded by Albin Johnson in 1997, whose members carefully recreate Stormtrooper costumes and are now regularly employed by Lucasfilm at conventions and other events. In a similar vein, members of the R2 Builders Club spend on average $8,000 to $10,000 — and many, many years — constructing exact replicas of Star Wars‘ most popular droid. We’re all familiar with scenes of fans camping outside theaters for weeks for the next instalment of their favorite franchise — Star Wars is to blame. YouTube has plenty of evidence of extreme fandom, too — take, for example, the loving craft that went into the above crowd-sourced, full-length remake of The Empire Strikes Back…

But Taylor doesn’t judge. Indeed, he makes a pretty convincing case that Star Wars is perhaps the closest thing we have to a universal cultural language, “the sine qua non of our modern media-drenched global culture.” It can’t be four hundred thousand hardcore fans who declared themselves Jedis in a UK census in 2001. The White House couldn’t pun so successfully on many other franchises in its public relations. Even in countries that had held off on embracing the franchise for a good thirty years, like Turkey, Darth Vader is now a familiar figure. We may not all be spending thousands of dollars on droid replicas, but it’s nigh-on impossible to find a total Star Wars newbie. And isn’t it reassuring that a story so resolutely on the side of the small fry, with a philosophy that’s basically Buddhist, should have found a home in the hearts of so many? Roll on the Force’s great reawakening…

← Prev: Life in 2D: Dan Povenmire on the Greatest Cartoons Ever, Salsa Music, and Not Being A Jerk Next: "You know my methods. Apply them!" →