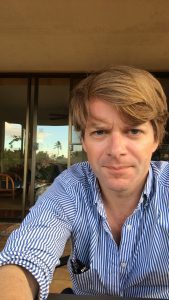 Dana performed on stage for Seriously Entertaining at Joe’s Pub at The Public Theater on February 24, 2014, speaking on the evening’s theme, “This Is Not A Man.” Watch it below.

Dana Vachon is the co-author, with Jim Carrey, of the novel Memoirs and Misinformation, and the author of the novel Mergers and Acquisitions. His essays and journalism have appeared in the New York Times, Slate, and Vanity Fair. He lives in Brooklyn.