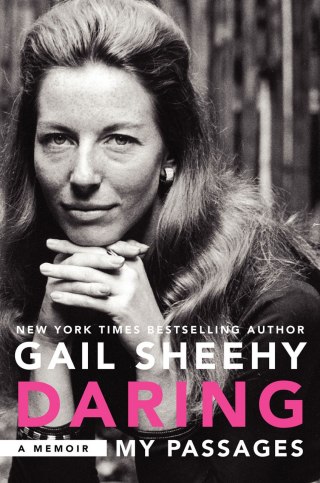 “You’ve taken LSD, you’ve jumped out of airplanes, you dressed up in hot pants to walk the streets with hookers; for heaven’s sake, you embedded yourself in the Irish civil war before anybody ever heard of embedded reporters and got caught in cross fire! You even scared presidential candidates — I mean, my God, didn’t the first President Bush shudder and say, ‘Is this going to be a full psychiatric layout?’ You’re so alive to the people and happenings around you, you can’t help yourself. You live life in the interrogative!”

When you put it like that, one wonders why it took Gail Sheehy so long to write a memoir. Then again, it does sound like it might have been difficult to fit in. Sheehy’s astonishing, intrepid career has taken her to California with Bobby Kennedy, to Derry with the women of the Irish civil rights movement, and to Cambodia in search of the child survivors of the killing fields. Her best-selling books — particularly the Passages series — have charted a new course for women of the baby-boom era, opening up national discussions on divorce, working mothers, menopause, and more. With so much life-material to choose from, it was perhaps inevitable that Daring: My Passages (William Morrow, 2014) would be a sizzler, crammed with fantastic first-hand accounts of some of the key moments of recent history. But it’s also a deeply personal book; a moving picture of love and loss; a frank, bracingly honest self-portrait.

Gail Sheehy was born in Mamaroneck, New York, in 1937. “My father didn’t really mind my being a girl, but I had to do double duty, as a boy-girl. He told me I could be a champion if I practiced hard enough and never gave up.” A childhood spent competing athletically, “as a boy-girl,” can perhaps be credited with the tenacity she attained — and needed — to be an ambitious woman setting out in the working world in the late 1950s. In an early job interview with J.C. Penney himself, she asked the businessman if his organisation paid girls the same as boys. “He smiled, puffed up a little, and pulled on his suspenders. ‘We certainly should.’ And so he did.” 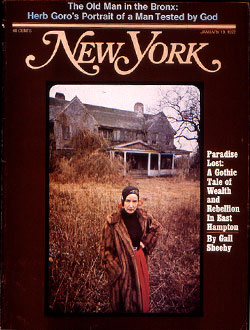 “The Secret of Grey Gardens” was first published in New York in 1972. Click on the image to read it.

An elopement, an abortion, an early marriage to a young medic (whom she supported with her work at the Rochester Democrat & Chronicle), and a baby daughter by the time she was twenty-six. When she pitched her first story to legendary editor Clay Felker in 1965, Sheehy’s life had already given her the breadth of experience that would make her such a sympathetic and insightful writer about the issues women faced in the shifting landscape of ’60s and ’70s America. But there’s much more to Sheehy’s work than gender politics. Watching Martin Luther King, Jr. deliver his most famous oration on television in 1963, she resolved not to spend her life experiencing the news second-hand: “I would dare to be there as history happened and write what I saw.” She took this attitude to Felker’s New York magazine, which launched in 1968 and would be the platform for many of her best-known pieces. These include “The Amphetamine Explosion“, a phenomenon Sheehy had direct experience of through her younger sister’s addiction; “Redpants and Sugarman”, an investigation into the conditions under which prostitutes survived in 1970s New York; and “The Secret of Grey Gardens“, the Gothic tale of Jackie Kennedy’s cousins “Little Edie” and “Big Edie” Beale which would later become a critically acclaimed documentary.

“Women can have it all, but not all at once.” This is one of the foundational insights of Passages (1976), the book that sent Sheehy careering up the best-seller lists and propelled her work into the national conversation. The Passages series examines in widescreen the most widely shared life experiences (graduations, careers, births, marriages, deaths), synthesising hundreds of interviews and a wealth of academic research to offer new perspectives on the choices we make. The first book was pretty much mainlined zeitgeist, appearing just as the social consequences of the sexual liberation of the 1960s started to manifest themselves and “mid-life crisis” became an unwelcome addition to the national vocabulary. As her own life changed, Sheehy recognised that there were more “passages” to write about. Follow-up volumes on menopause (The Silent Passage, 1992), caring for a loved one (Passages in Caregiving: Turning Chaos Into Confidence, 2010), and other subjects gave the project a panoramic scope. 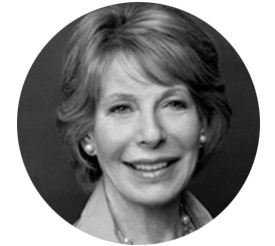 Sheehy proved equally adept in the political sphere when Tina Brown approached her in the 1980s for a series of profiles of presidential candidates for Vanity Fair. These included Gary Hart (“This was a man with an unusually serious case of grandiosity”), George H.W. Bush, Michael Dukakis, and Al Gore. She met and profiled Margaret Thatcher, whom she discovered “lived basically on coffee, vitamin C, and royal jelly — a wallop of minerals right from the hive, as befits a queen bee.” It would be Hillary Clinton, though, who would hold her attention the longest, even becoming the focus of her 1999 book Hillary’s Choice. “The saga of Bill and Hillary had echoes of Franklin and Eleanor,” she writes, “as well as Tracy and Hepburn, with a dash of Bonnie and Clyde.” Why the particular fascination? “As I saw it, she was the lightning rod for people’s fear of change: the change of generation from Bush to boomers, the change in equation between men and women, the huge social dislocation as we moved into a new information-based economy.” Hillary is also, of course, a great case study for adherents of Passages. Oft-pilloried, she would nonetheless go on to win political office of her own, run for president, and accept high office at the State Department. And who knows if that’s the end of her political journey…

Despite Sheehy’s many journalistic and authorial achievements, Daring: My Passages is by no means a self-aggrandising work. She pokes endlessly at her on-off relationship with Clay Felker in the 1970s and early ’80s, revealing huge doubts about her own motives and emotions. She’s alive to and suspicious of the chemical effects of love, which repeatedly send her back into Clay’s arms. (They eventually married in 1984.) She’s also critical of her own mothering, first of older daughter Maura, and later of adopted daughter Mohm, who enters her care direct from a refugee camp in Cambodia. In this tendency toward self-examination, we see the full strength of the spotlight she’s also been able to turn outward onto the world in her writing.

So yes, read it for the fantastic anecdotes. On the campaign trail with Bobby Kennedy. The dinner parties with Tom Wolfe, Henry Kissinger, Rupert Murdoch. The hostile takeover of New York magazine in 1976. But discover also a spirit open to all that life can throw at you; an intellect unwilling, perhaps unable to rest. A life of daring, Sheehy argues, is a life lived. Hard to argue.

You can buy Daring: My Passages at McNally Jackson. Gail Sheehy will appear at our next Seriously Entertaining show, Inside the Lie, on September 29 at City Winery. You can buy tickets here. Our other guests are: Natalie Haynes, John Guare, Marcelo Gleiser, and Andrew Solomon.