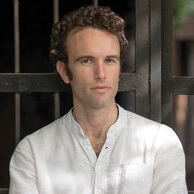 Elliot performed on stage for Seriously Entertaining at Joe’s Pub at The Public Theater on September 18, 2018, speaking on the evening’s theme, “The Long Way.”

Elliot Ackerman is the author of the novels Red Dress In Black and White, Waiting for Eden, Dark at the Crossing, Green on Blue, and 2034: A Novel of the Next World War, as well as the memoir Places and Names: On War, Revolution and Returning. His most recent book is called The Fifth Act: America’s End in Afghanistan. Ackerman’s books have been nominated for the National Book Award, the Andrew Carnegie Medal in both fiction and non-fiction, and the Dayton Literary Peace Prize. His writings have appeared in Esquire, The New Yorker, The Atlantic, and The New York Times Magazine, among other publications, and his stories have been included in The Best American Short Stories. He is both a former White House Fellow and Marine and served five tours of duty in Iraq and Afghanistan, where he received the Silver Star, the Bronze Star for Valor, and the Purple Heart.