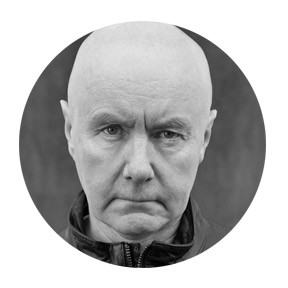 Irvine performed on stage for Seriously Entertaining at Joe’s Pub at The Public Theater on June 15, 2015, and February 2, 2016, speaking on the evening’s themes, “Summertime Blues,” and “I’ll Have Another.” Watch them below.

Irvine Welsh is a novelist, playwright, screenwriter, and short-story writer. His novel Trainspotting was a smashing success that went on to receive as many good reviews as disgusted and outraged ones – a pattern of critical reception that continues to this day. Since Danny Boyle’s film adaptation of Trainspotting was released in 1996, Irvine Welsh has remained a controversial figure. In recent years he has become a social commentator on many issues including Scottish independence. His other books include Ecstasy, Filth (which was adapted into a film in 2013), Glue, Porno, The Bedroom Secrets of the Master Chefs, If You Liked School You’ll Love Work, Skagboys, The Sex Lives of Siamese Twins, A Decent Ride, and his most recent, Dead Men’s Trousers. Welsh lives in Chicago.

In his own words: “I like uncompromising characters. They are tough to deal with in real life, but great fun in fiction.”