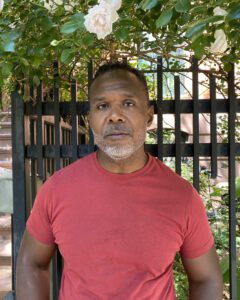 James performed on stage for Seriously Entertaining at Joe’s Pub at The Public Theater on September 13, 2022. He previously also performed at a SpeakTogether student matinee at Edward R. Murrow High School in Midwood, Brooklyn, on January 18, 2020, speaking on the theme, “Look Before You Leap.”

James Hannaham is the award-winning author of Delicious Foods (Little, Brown 2015), winner of the PEN/Faulkner Award and the Hurston/Wright Legacy Award. It was selected for the Barnes & Noble Discover Great New Writers Program, The New York Times, and The Washington Post’s 100 Notable Books of 2015, and it was a finalist for the Los Angeles Times Book Prize. His debut, God Says No (McSweeney’s 2009), was honored by the American Library Association’s Stonewall Book Awards. He has published short stories in One Story, Fence, Story Quarterly, BOMB, and elsewhere. Hannaham was a contributor at the Village Voice beginning in 1992 and has been a staff writer at Salon. His criticism, essays, and profiles have appeared in Spin, Details, Us, Out, Buzzfeed, The New York Times Magazine, and 4Columns.