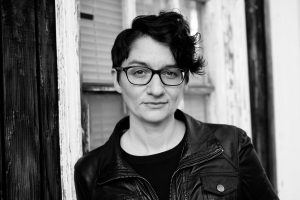 Melissa performed on our virtual stage for Seriously Entertaining on October 20, 2020, speaking on the evening’s theme, “Nerves Of Steel.” Watch it below. Melissa also led a Student Storytelling Workshop for SpeakTogether at Talent Unlimited High School during the month of December 2020.

Melissa Faliveno is a writer, editor, musician, teacher, and Wisconsinite in New York City. Her debut essay collection, TOMBOYLAND, about gender, class, and the American Midwest, is forthcoming from Jill Soloway’s Topple Books on August 4, 2020. Her work has appeared in Poets & Writers, Prairie Schooner, DIAGRAM, Essay Daily, Green Mountains Review, Lumina, and Midwestern Gothic, among others, and received a notable selection in Best American Essays 2016. She has profiled USWNT star Megan Rapinoe and musicians Valerie June and Jason Isbell; and an essay about her life as a former roller derby skater (moniker: Harlot Brontë) was published in the anthology Derby Life (Gutpunch Press, 2015). Born and raised in small-town Wisconsin and a first-generation college graduate, Melissa received a BA in English and creative writing from the University of Wisconsin and an MFA in nonfiction writing from Sarah Lawrence College, where she currently teaches in the graduate writing program. She has also taught writing to incarcerated men, high school students, and working adults, and has led talks, interviews, workshops, and panels about writing and publishing at conferences and events across the United States and abroad, including Catapult, AWP, Poets & Writers Live, GrubStreet’s Muse & the Marketplace, Voices of the Middle West, and the Finnish Literature Exchange in Helsinki. Most recently the senior editor of Poets & Writers Magazine and the producer and co-host of Ampersand: The Poets & Writers Podcast, Melissa was formerly an editor at Trails Books, an independent nonfiction press focused on Midwestern culture, sports, and travel; and a freelance features reporter and columnist for Isthmus, Madison, Wisconsin’s alternative weekly. She lives in Brooklyn, where she is the cofounding nonfiction editor of the arts and literature zine Black Rabbit Review, and a singer and guitarist in the indie rock band Self Help, which released its first LP, Maybe It’s You, in Fall 2018. Melissa is represented by Adriann Ranta Zurhellen of Foundry Literary + Media.