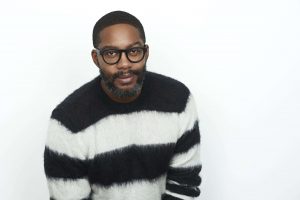 Mitchell performed at a SpeakTogether virtual student matinee on January 18, 2020, speaking on the day’s theme, “Look Before You Leap,” and led a Summer Writing Workshop for SpeakTogether at Talent Unlimited High School on July 12, 2016. Mitchell also performed on stage for Seriously Entertaining at Joe’s Pub at The Public Theater on February 7, 2017, speaking on the evening’s theme, “Failing Up.”

Mitchell S. Jackson’s debut novel The Residue Years (Bloomsbury) received wide critical praise. Jackson is the winner of a Whiting Award. His novel also won The Ernest J. Gaines Prize for Literary Excellence and was a finalist for The Center for Fiction Flaherty-Dunnan First Novel Prize, the PEN/Hemingway Award for Debut Fiction, and the Hurston/Wright Legacy Award. Jackson’s honors include fellowships from the New York Public Library’s Cullman Center, The Lannan Foundation, the Ford Foundation, PEN America, TED, New York Foundation for the Arts, and The Center for Fiction. His writing has appeared in The New Yorker, Harper’s, The New York Times Book Review, The Paris Review, The Guardian, Time magazine, and elsewhere. His nonfiction book, Survival Math: Notes on an All-American Family (Scribner), was published in the spring of 2019.