Why We Fight: Body Counts, Surviving the Plague, and the Angels in America 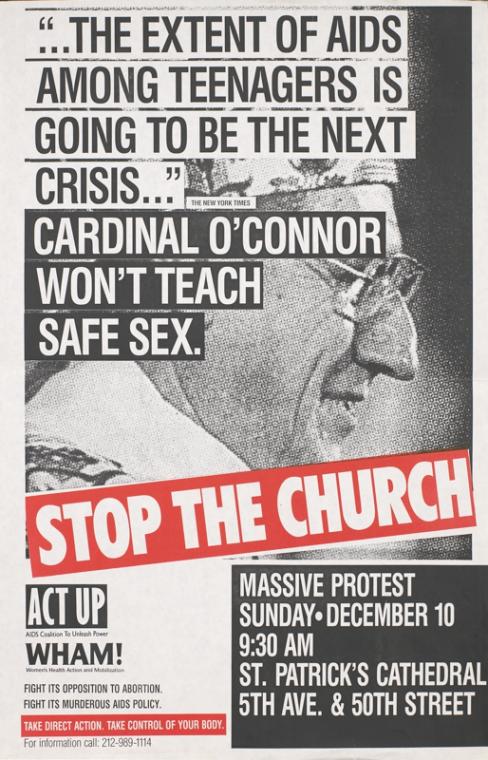 There’s a poster currently on display in the Stephen A. Schwarzman Building advertising a “MASSIVE PROTEST” to “STOP THE CHURCH” at St. Patrick’s Cathedral. It’s almost twenty-five years old but quite as shocking as it was in 1989.

In fact, pretty much all the material in the New York Public Library‘s moving exhibition “Why We Fight: Remembering AIDS Activism” has retained its direct, visceral power. The famous “Silence = Death” posters, which reappropriate the pink triangles used by the Nazis to brand gay men, are still highly provocative. So too are the numerous works on display by artists’ collective Gran Fury, including the “New York Crimes” front pages that sought to readdress a perceived imbalance in news coverage of the AIDS crisis, and the memorable pin badges that read “Men: Use Condoms or Beat It”. NYPL, which preserves the archives of a range of activist organisations and key individuals, has done a magnificent job in presenting the early grassroots response to the epidemic. The exhibition is also a timely reminder that AIDS is an ongoing crisis. The horror I felt reading on one poster “One AIDS death every thirty minutes!” was magnified by an editorial caption bringing this stat up to date: “Globally, three people die from AIDS every minute.”

In 1989, there had already been more than 117,000 cases of AIDS reported in the US alone, a 35,000 jump on the year before (source: The Foundation for AIDS Research). The aforementioned “Stop the Church” demonstration was being staged by ACT UP (AIDS Coalition To Unleash Power) and WHAM! (Women’s Health Action and Mobilization), two of the activist organisations that sprung out of the AIDS crisis in the 1980s. Their anger stemmed from Archbishop of New York John Cardinal O’Connor’s active opposition to contraception at a time when safe sex was one of the first lines of defence against the epidemic. It’s in the middle of this violent clash of values and cultures that we find ourselves at the opening of Sean Strub‘s excellent new book Body Counts: A Memoir of Politics, Sex, AIDS, and Survival (Scribner, 2014). 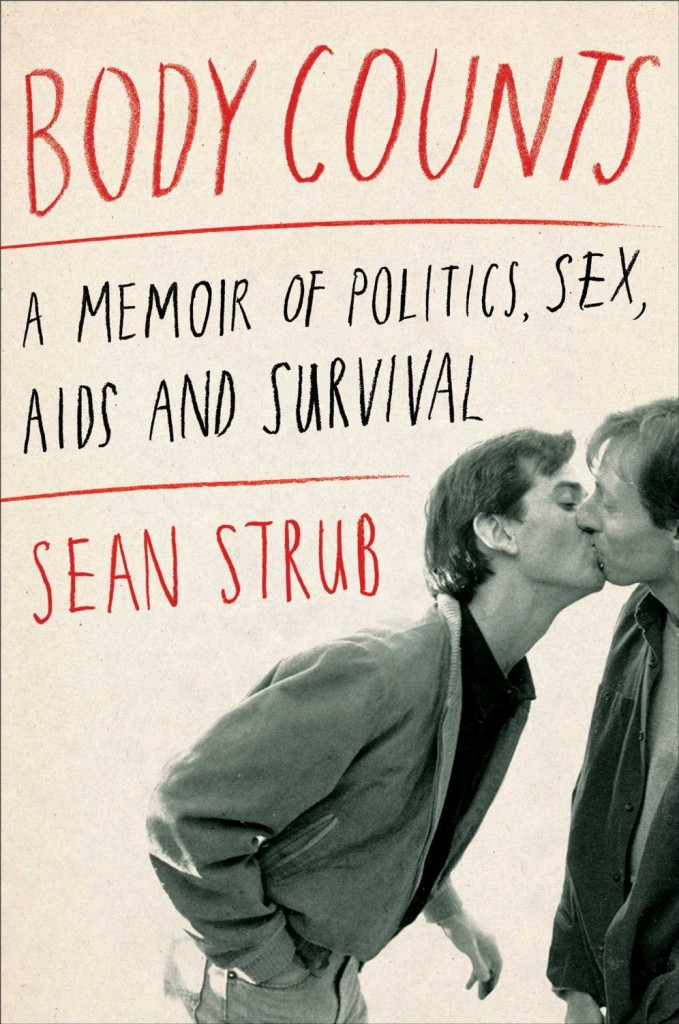 Strub has led a truly extraordinary life. His work as an LGBT rights and AIDS activist has taken many forms, among them securing Tennessee Williams’ signature for the Human Rights Campaign’s first fundraising mailshot in 1981; working with ACT UP to raise money and spread critical information about HIV/AIDS medication during the late 1980s and early 1990s; and founding and editing POZ magazine, which caters to people living with or affected by HIV/AIDS. But Body Counts is enriched by much more than its tales of activist good deeds. It’s a window into Congressional life in the 1970s, when Strub worked as an elevator boy in the US Senate. It’s a snapshot of crucial moments in American history, for instance John Lennon’s assassination, which Strub nearly witnessed (an event with a strange echo later in the book, when Yoko Ono attends a benefit performance of The Night Larry Kramer Kissed Me the same evening Barbara Walters’ interview with Mark David Chapman airs on ABC). And above all, it’s an incredible survival story. Before the introduction of protease inhibitors and the development of antiretroviral therapy in the mid-1990s, Strub’s T-cell count — a measure of the immune system’s capabilites — reached a low of one (a healthy average is between five hundred and a thousand). Almost twenty years after his Lazarus-like return to health, he continues to fight for the rights of people with HIV/AIDS worldwide.

Body Counts is one of the NYPL’s recommendations for reading to accompany “Why We Fight”. Also on the list is How To Survive a Plague (2012), David France’s superb Oscar-nominated documentary about ACT UP and TAG (Treatment Action Group), which focuses on activists’ attempts to influence institutional responses to the crisis at both municipal and federal levels. Netflix users can watch it right now:

Looking further down the list, I’m also compelled to return to Tony Kushner’s sublime Angels in America, another work that investigates New York’s response to the AIDS crisis, though this time through the fantastical lens of “A Gay Fantasia on National Themes”. If you can’t see it onstage, where it tends to be performed as a two-night banquet of theatre, it’s a fine read and a brilliant HBO film starring Al Pacino, Meryl Streep and Emma Thompson. You can see the trailer here.

Kushner wrote his masterpiece in 1993, ending it on an optimistic note. Unfortunately, as “Why We Fight” reminds us, the epidemic is far from over. AIDS has killed more than thirty million people worldwide, and there are more than two million new infections every year, principally in sub-Saharan Africa. With numbers like these, it’s with great horror that one imagines what the state of treatment and the scale of the epidemic might have been without the efforts of activists worldwide, including those who feature in Body Counts and How To Survive a Plague. These are works of activism in themselves, suggesting that what Kushner’s angel calls “the great work” might have only just begun.

“Why We Fight: Remembering AIDS Activism” runs till April 6 at the Schwarzman Building on Fifth Avenue between 40th and 42nd Streets. Visit the New York Public Library website for more details.