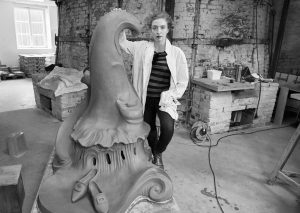 Rachel performed on our virtual stage for Seriously Entertaining on January 21, 2020, speaking on the evening’s theme, “Feast Your Eyes.”

In richly detailed sculptures, paintings, panoramic wallpapers, and multipart installations, Rachel Feinstein investigates and challenges the concept of luxury as expressed in eighteenth- and nineteenth-century Europe, in the context of contemporary parallels. By synthesizing visual and societal opposites such as romance and pornography, elegance and kitsch, and the marvelous and the banal, she explores issues of taste and desire.

Born in Fort Defiance, Arizona, and raised in Miami, Feinstein received a BA in 1992 from Columbia University, where she studied religion, philosophy, and studio art. That same year she attended the Skowhegan School of Painting and Sculpture in Madison, Maine. After being included in several group shows in New York throughout the nineties, her work was featured in the first iteration of MoMA PS1’s Greater New York in 2000. Her subsequent solo exhibitions include Tropical Rodeo, Le Consortium, Dijon, France (2006); The Snow Queen, Lever House, New York (2011); and Folly, a series of outdoor sculptures installed in Madison Square Park, New York, in 2014. In 2018, Gagosian Beverly Hills presented Secrets, an exhibition of large-scale sculptures inspired by the Victoria’s Secret “Angels” and majolica pedestals modeled after Rococo commedia dell’arte figurines. The full set of majolica sculptures—fired at the famous Nymphenburg Porcelain Manufactory in Munich—was featured in Frieze Sculpture 2018 in London.

Launching the Artist in Residence project—a collaboration between Gucci and Chatsworth House—Feinstein’s work will be on view at Chatsworth House, Derbyshire, England, in June 2019. The included works are related to the research Feinstein conducted during her residency at the estate.