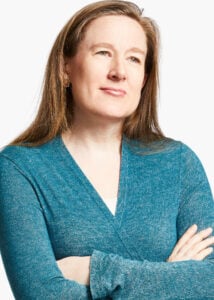 Sarah will perform on stage for Seriously Entertaining at Joe’s Pub at The Public Theater on June 7, 2022, speaking on the evening’s theme, “Being and Becoming.”

Sarah originally intended to be a poet but turned to drama after studying with Paula Vogel at Brown University. In 2003, she won the Helen Merrill Emerging Playwrights Award and the Whiting Writers’ Award. She was awarded a MacArthur Fellowship in 2006 and is also the recipient of the PEN/Laura Pels Award for a mid-career playwright, the Feminist Press’ Forty Under Forty award, and the 2010 Lily Award.

She is currently on the faculty at Yale School of Drama and lives in Brooklyn with her family.

In her own words: “Cell phones, iPods, wireless computers will change people in ways we don’t even understand. We’re less connected to the present. No one is where they are.”