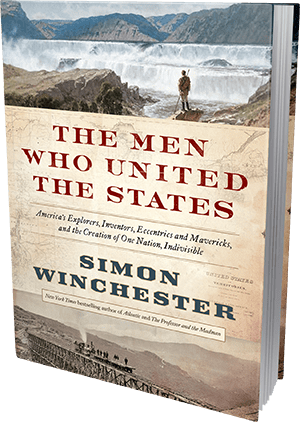 We’re thrilled at the House of SpeakEasy to be joined for our sold-out opening gala by the British-born historian Simon Winchester, whose work includes books on China, the Oxford English Dictionary, and, most recently, the United States of America…

The United States. This unique national quality — of first becoming and then remaining so decidedly united — is a creation that, in spite of episodes of trial and war and suffering and stress, has been sustained for almost two and a half centuries across the great magical confusion that is the American nation. The account that follows, then, is on one level a meditation on the nature of this American unity, a hymn to the creation of oneness, a parsing of the rich complexities that lie behind the country’s so-simple-sounding motto: E pluribus unum.

So writes Winchester in the preface to his engrossing, enthralling, enlightening The Men Who United the States (Harper, 2013). Here is encapsulated the glorious freewheeling nature of his working method, more hymnal than forensic, leavened as much with personal experience as names and dates. Many of the reviews of his book have commented on Winchester’s evident love for the US (see the New York Times, the Washington Post and the Telegraph) — the passion, in fact, of an adopted son, as he became a naturalised citizen in 2011. This love stimulates him, and the synaptic pinball that takes place when his personal experience and extensive research collide makes for riotous, exhilarating reading. It’s a helter-skelter vision of the taming of the frontier, reviving those whom history has forgotten, casting new light on those it’s remembered, and offering a unique and deeply personal reading of a history you might think you knew. 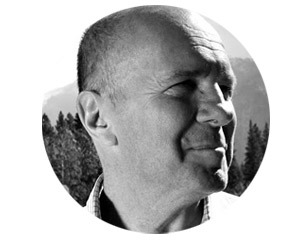 Winchester’s geological background is everywhere evident in his knowledge and understanding of America’s topography. This is important, for it’s the trees and rocks, the mountains and rivers, the Midwestern expanses of prairie so broad that the curve of the earth is visible in the distance, that dictated where the early settlers settled and what routes were taken by trailblazers like Meriwether Lewis and William Clark. The first couple of chapters are dominated by explorers and cartographers, including Lewis and Clark and the men who led the so-called Four Great Surveys of the West, opening the world’s eyes to the wonders of Yellowstone, the Grand Canyon and many other things that in time would come to define the American landscape in the collective imagination. Later chapters take in the railroad and communications pioneers who made it easier for Americans first to visit and later to talk to one another over its vast expanse.

Part of what I enjoyed about this very personal account of the foundations of American civilisation is Winchester’s tendency to see palimpsests wherever he looks. Often he will stop somewhere and see at once what is, what was, and the currents of thought that link the past to the present. In the first chapter, which traces the path Lewis and Clark took across the largely uncharted territories west of the Mississippi, Winchester pauses at Whiteman Air Force Base:

There seems a certain irony in this nuclear firebase being located so very close to the Lewis and Clark expedition route, not least because what Jefferson’s explorers were seeking to do, even if unknowingly at the time, was tied to the unique American concept of the frontier and to the development of what to this day is known — and argued over — as the frontier thesis. The irony stems from the argument that the frontier mentality, if such a thing truly exists, still plays a nourishing — and controversial — role at the intellectual roots of much of today’s American foreign policy.

Actions past and present, linked by arteries of thought. By his own confession, the connections Winchester makes are often over ground as rocky and uneven as the continent he describes. But all his insights are lit by flashes of inspiration, illuminating alternative histories and drawing dotted lines between points others might not think to join up. The near-concurrent signing of the Emancipation Proclamation and the Pacific Railroad Acts, for instance, were not as legislatively separate as they might sound:

The South’s early railways were small, local affairs, largely unconnected to the great new lines of the East. This helped exacerbate the feelings of separation and otherness that led to the Confederacy and the Civil War. The existence of an extensive and technically sophisticated Northern railroad network also became a factor in the outcome of that war, giving the Union generals a major advantage for rapidly moving their troops.

The implication is left hanging: the laws passed by President Lincoln that facilitated the building of the transcontinental railroad, which unified the nation infrastructurally, running parallel to his attempts to save the union through the fighting of the Civil War.

Aside from these broad speculative touches, I also enjoyed the breadth of Winchester’s research. His seeming-endless gallery of minor characters are flavour enough for five books. Some don’t even escape the footnotes, for instance:

A Texan explorer named Clyde Eddy did manage to shoot this rapid [in the Marble Canyon, a section of the Colorado River in northern Arizona] in 1927, along with a black bear named Cataract, from the New York zoo; and Rags, an Airedale from the Salt Lake City dog pound.

I have since discovered that Eddy, who appears nowhere else in Winchester, wrote a book on his experiences and actually filmed his trip down the Colorado:

This is just one of the many happy leaping-off points The Men Who United the States gives the reader.

John Wesley Powell, one of Winchester’s many protagonists, led the expedition that made the first known passage through the Grand Canyon. Speculating on how he and his men must have felt passing through the canyon, “cold and wet and hungry, a mile deep in the black bowels of the earth”, Winchester recalls a scrap of Philip Larkin about “earth’s immeasurable surprise”:

How could they have guessed […] how magnificent the world was for hundreds of square miles above their watery prison? Up on the desert was a true wonder of the world: when Teddy Roosevelt inaugurated it as Grand Canyon National Park in 1908, he declared simply, and brooking no argument, “You cannot improve on it … what you can do is keep it for your children, your children’s children, and all who come after you, as the one great sight which every American should see.”

Earth’s immeasurable surprise. This would have been a fitting epigraph for the book, containing as it does both the frontier terror that the pioneers faced down and the wonder that possesses a heart like Winchester’s at the majestic scale of America. It’s a wonder you can share in The Men Who United the States.

← Prev: The Luminous Uma Thurman Next: Susan Orlean Does Her Own Stunts →