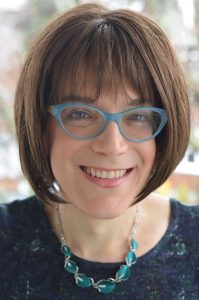 Stephanie performed on stage for Seriously Entertaining at Joe’s Pub at The Public Theater on June 13, 2016, speaking on the evening’s theme, “When Strangers Meet.” Watch it below.

Stephanie (also Steph) Burt is a poet, literary critic, and professor. She has published multiple collections of poems, including Advice from the Lights (2017), Belmont (2013), Parallel Play (2006), Popular Music (1999), and After Callamachus: Poems (2020). Her most recent publication is We Are Mermaids: Poems, which was published in 2022. Her essay collection Close Calls with Nonsense was a finalist for the National Book Critics Circle Award. Burt taught at Macalester College for several years before becoming a Professor of English at Harvard University. She lives in the Boston area with her spouse, Jessie Bennett, and their two children.

In her own words: “It seems to me that poetry in general lets you create a voice that is you-but-not-you, you-but-like-you, you-as-someone-else, for the writer and also for the reader…”