The Chronicles of Fry 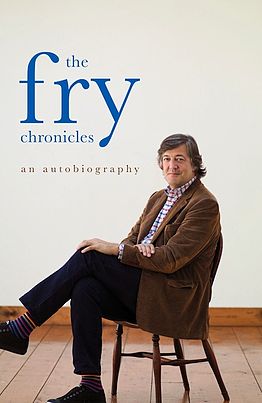 Many times while reading The Fry Chronicles, Stephen Fry‘s bestselling memoir, I was forced to confront sadly the likelihood that the world will no longer need my autobiography. Not that he and I have lived the same life exactly. I haven’t written a dozen bestselling books or had a show on Broadway or been nominated for a Golden Globe or made a series of award-winning documentaries or presented a fantastically popular gameshow — or even published eighteen and a half thousand tweets, though at least I can realistically aim to. Nevertheless, I found myself so wholeheartedly agreeing with so many of his observations on life that anything I might have to say is now effectively redundant. We even share a passion for Ricicles.

But enough about me.

The Fry Chronicles, through a series of words beginning with the letter C, tells the story of Fry’s life through late adolescence and the first decade or so of his remarkable career. Cereal, candy, cigarettes, Cundall Manor School (where he briefly taught), Cambridge, coming out, [University] Challenge, The Cellar Tapes (the Footlights revue co-written by Fry that won the first Perrier Comedy Award in Edinburgh), cars, commercials, celibacy, and of course his colleague — “M’Coll” — Hugh Laurie, his best friend and the dedicatee of the book. There’s a wonderful moment, not quite their first meeting but the first time they find themselves working together, on the script for a pantomime of The Snow Queen:

‘I saw you in Nightcap you were magnificent it was brilliant,’ I said in a rush.

The excruciating horror of mutual appreciation out of the way, we both paused, unsure of how to continue.

Five minutes later Hugh and I were writing a scene together as if we had been doing it all our lives.

You read about people falling suddenly in love, about romantic thunderbolts that go with clashing cymbals, high quivering strings and resounding chords and you read about eyes that meet across the room to the thudding twang of Cupid’s bow, but it is less often that you read about collaborative love at first sight, about people who instantly discover that they were born to work together or born to be natural and perfect friends.

Herein lies the pleasure of reading a book by a person you’ve always loved about other people you’ve always loved. Fry’s memories of his work with Hugh Laurie, Rowan Atkinson, Emma Thompson et al make for fabulous reading. They’re also a welcome prompt to the reader to rediscover Fry’s brilliant early work. I particularly loved discovering his Dracula-inspired riff “The Letter” in The Cellar Tapes. His ear for comic metaphor and gift for punning are given full rein, as in: “Of all the hideously disfigured spectacles I have ever beheld… those perched on the end of this man’s nose remain forever pasted into the album of my memory.” See the full sketch here:

But, to deploy one of my favourite Fryisms, set fire to my legs if I give sir the false impression that The Fry Chronicles is a 400-page ball of pure light and joy. By no means:

Stephen Fry’s public revelation that he suffers from a form of manic depression and the Emmy Award-winning two-part documentary on the subject that he subsequently made (Part I and Part II) have revolutionised the understanding of mental illness in the UK. Now the president of mental-health charity Mind, Fry continues the hugely valuable work of awareness-raising through public activism and his writing. Although the events of The Fry Chronicles predate his diagnosis, the book is coloured by his interpretation, through the lens of his bipolarity, of his own behaviour (Cs again) — the credit cards, the cars, the country house, and, in the final page, a prelude of what’s to come in the next volume of the chronicles, cocaine.

Between now and such a volume, though, lies Stephen Fry’s guest appearance at the House of SpeakEasy. You can buy tickets for our March 18 show, “Are You For Sale?”, which also features Susan Cheever, Michael Friedman, Jay McInerney and Jeff Kinney, on the City Winery website here.
← Prev: Curtain Call: This Is Not A Man Next: This Is Not A Man →