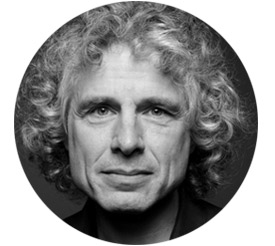 Steven performed on stage for Seriously Entertaining at Joe’s Pub at The Public Theater on June 15, 2015, speaking on the evening’s theme, “Summertime Blues.” Watch it below.

Steven Pinker is an experimental psychologist and one of the world’s foremost writers on language, mind, and human nature. Currently Johnstone Family Professor of Psychology at Harvard University, Pinker has also taught at Stanford and MIT. His research on visual cognition and the psychology of language has won prizes from the National Academy of Sciences, the Royal Institution of Great Britain, the Cognitive Neuroscience Society, and the American Psychological Association. He has also received eight honorary doctorates, several teaching awards at MIT and Harvard, and numerous prizes for his books The Language Instinct, How the Mind Works, The Blank Slate, and The Better Angels of Our Nature. He is Chair of the Usage Panel of the American Heritage Dictionary and often writes for The New York Times, Time, and The New Republic. He has been named Humanist of the Year as well as one of Time magazine’s “100 Most Influential People in the World Today.” Pinker lives in Boston and in Truro.

In his own words: “Though the scientist’s viewpoint is often seen as cold, detached, amoral, I argue…that ultimately it can be more moral than the moralist’s. It is not enough to weep over tragedies, even when weeping is appropriate. We should also apply our analytic powers to explicate the motives that lead humans to do destructive things.”