The Bookmobile at Red Hook Initiative

August 11 was another hot day in New York City. When the Bookmobile rolled up to Red Hook, Brooklyn for a graduation celebration in partnership with the Red Hook Initiative, it was met by six-year-old Jeremiah — who had a plan. Clad in a bright red, Nike-checked shirt and pleated jeans, he stood confidently in front of the Bookmobile as he offered his help: “If there’s an emergency for you guys, ask me to come.”

He continued: “When I have superpowers, I will fly. But the only way I will use my powers to fly is when I’m saving the world … I have a secret — I made my own armor, out of leather and gold.” I asked Jeremiah if he wanted a book. He did, and I suggested one near the front of the shelf we were standing beside: From the Tops of Trees, from Kao Kalia Young and Rachel Wada. He accepted it with a smile and held it up. “I like trees, because they’re earth!”

Jeremiah wasn’t alone. He was accompanied by his aunt and his older brother, seven-year-old Messiah, or “Mass Mass,” as Jeremiah called him. Messiah chose a copy of So You Want to Be an Owl by Jane Porter and Maddie Frost. Jeremiah wouldn’t want to be one: “All you do is stay up in the morning and look for your babies and hunt out. It’s bored being an owl.” He’d stick with his trees. 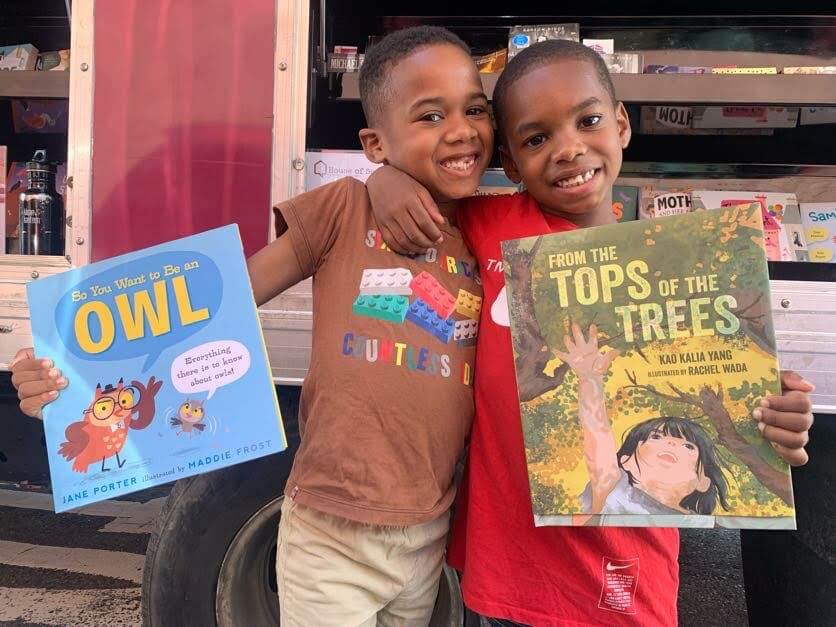 Lively brothers Messiah (left) and Jeremiah of Red Hook. The pair were not shy in choosing books — and engaged in lively discussion about the relative value of owls vs. trees.

Jeremiah was not the only tree-loving superhero in attendance, but he was among the youngest. August 11 marked the end of Red Hook Initiative’s Freedom Schools program, part of the Children’s Defense Fund. This graduation ceremony, primarily for 9th and 10th graders, included painting, food, presentations from community leaders and, of course, books. Modeled on the 1964 Mississippi Freedom Summer project, Red Hook Initiative provides six weeks of academic enrichment courses for youth promoting critical thinking, literacy skills, and social action across grade levels—just one of their many programs that support communities of the Red Hook Houses. Since its founding 20 years ago by Jill Eisenhard, Red Hook Initiative’s programs have served over 10,000 individuals who call this area home. The nonprofit focuses on young people, offering year-round opportunities for nearly 500 middle schoolers, young adults, and high schoolers every year.

It was refreshing to meet with some students participating in this program. The gathering was small, and everyone took turns approaching the Bookmobile, sometimes bringing a friend along. In characteristic fashion, many of the teens were nonchalant. I watched two girls who looked around 13 years old debate their selections. Both opted for YA romances—Melissa Gorzelanczyl’s Arrows and Jenna Evans Welch’s Love & Olives—before returning to the painting stations, which were adjacent to the watermelon and burger stands that were the true draw of the day.

Other visitors included the dedicated staff of Red Hook Initiative, browsing largely for their own children back home. Naiyma Holmes, Director of People Operations & Culture, approached the truck with a bright smile. “I’m waiting for the day when I can have a library. Right now I just have a big shelf,” she said. She was searching specifically for a title for her three-year-old son. “He loves to read books, just like me. He’s currently teaching himself to play piano, and can already play ‘Old Macdonald’ and ‘Mary Had a Little Lamb.’ He has an incredible memory.” She ultimately landed on Danna Smith and Ana Zurita’s One Blue Gnu, because her son loves numbers, she said.

Another visitor, Olabisi, came to Red Hook from Brownsville for a COVID test, which led her to stumble upon the Bookmobile. She left with The Fearless Flights of Hazel Ying Lee. 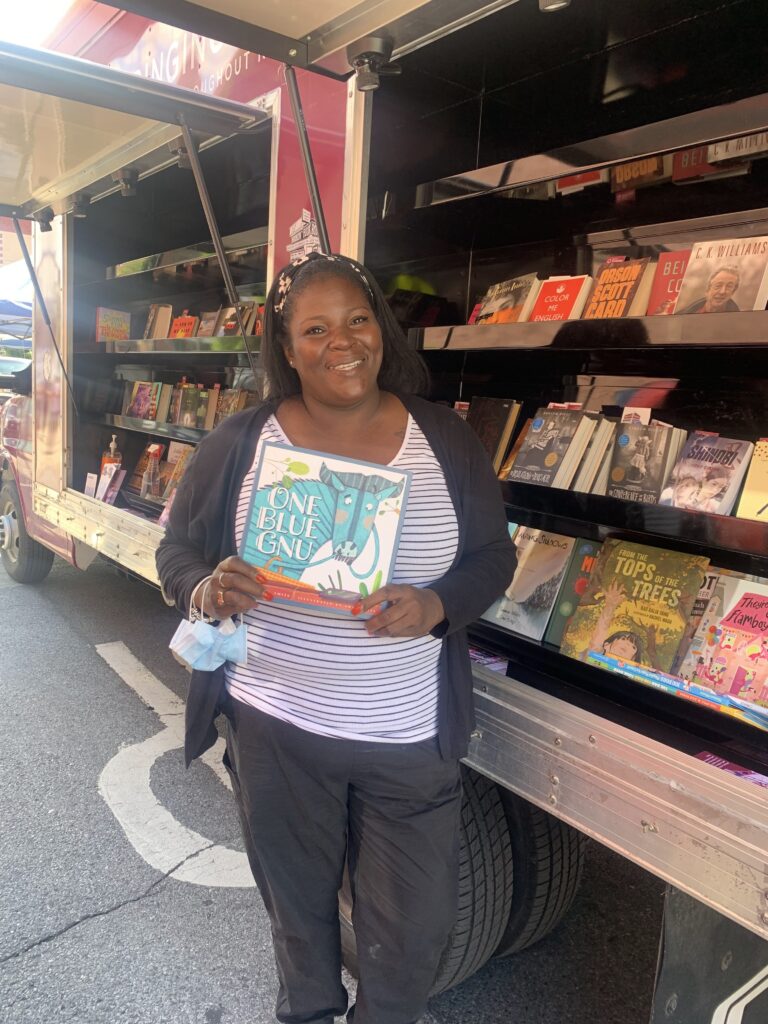 Ms. Holmes of RHI, with Danna Smith’s One Blue Gnu, a counting book published this year about a cellphone-wielding wildebeest. The book is for her three-year-old son, whose appetite for books, she said, is hard to keep up with.

Red Hook Houses has experienced many challenges over the past decade, from the devastation of Hurricane Sandy to the online programming pivot necessitated by the pandemic. This community—almost half of which is living below the federal poverty line—has borne a disproportionate brunt of the effects of climate change and public health crises in the New York metro area. In response, Red Hook Initiative has responded with efforts to spread awareness of these issues and to promote social action.

I spoke with Director of Community Building, Catherine McBride, who provided a glimpse into the extent of RHI’s work in community resiliency. Catherine started working with RHI in 2012, shortly after Hurricane Sandy hit, and oversees “client intakes and referrals, connecting people to resources and grant-making.” She says she facilitates distributing about $100,000 dollars each year, helping people pay their bills. She also supervises a group of youth advocates. “A lot of the work we’re doing on the community building side is long-term projects. We’re building on what we’ve done in the past. It feels pretty fluid,” she said.

How fitting, I thought after speaking with Catherine, to have encountered Jeremiah and Messiah upon our arrival and discussed trees and birds on this exceptionally hot August afternoon. Much of RHI’s work has to do with helping residents maintain roots in a community that is regularly battling economic, social, and climactic upheavals. In other words, it’s essential work of fostering balanced and symbiotic ecosystems — owls, trees, people, books and all — amidst the upheavals.

Melissa Febos is the author of the forthcoming Girlhood, as well as Whip Smart and Abandon Me, a Lambda Literary Award finalist and Publishing Triangle Award finalist. Her essays have appeared in Tin House, The Believer, The New York Times, and elsewhere. Febos is the...

END_OF_DOCUMENT_TOKEN_TO_BE_REPLACED

Renée Watson is the New York Times bestselling, Newbery Honor Book, and Coretta Scott King Award-winning author of Piecing Me Together, This Side of Home, What Momma Left Me, and Betty Before X, co-written with Ilyasah Shabazz, as well as two acclaimed picture...

END_OF_DOCUMENT_TOKEN_TO_BE_REPLACED

Marisa Acocella is the New York Times best-selling author of the graphic novels The Big She-Bang (which you can buy in our Bookshop storefront) and Ann Tenna, the graphic memoir Cancer Vixen, and Just Who the Hell is She, Anyway? She is also a cartoonist for The New...

END_OF_DOCUMENT_TOKEN_TO_BE_REPLACED

Matthew Gavin Frank is the author of The Mad Feast and Preparing the Ghost, which was reviewed on the front-page of The New York Times Book Review. He teaches creative writing and lives in Marquette, Michigan. His new book is Flight of the Diamond Smugglers: A Tale of...

END_OF_DOCUMENT_TOKEN_TO_BE_REPLACED

Amelia Pang is an award-winning journalist who has written for publications such as Mother Jones and The New Republic. She has covered topics ranging from organic import fraud to the prevalence of sexual violence on Native American reservations. In 2017, the Los...