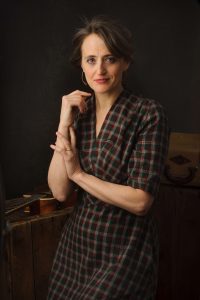 Maggie Paxson is a writer, anthropologist, and performer. Fluent in Russian and French, she has worked in rural communities in northern Russia, the Caucasus, and upland France. She is the author of Solovyovo: The Story of Memory in a Russian Village, and her essays have appeared in the Washington Post Magazine, Wilson Quarterly, and Aeon. Her newest book is The Plateau.

On November 12th, she will be speaking at House of SpeakEasy’s Seriously Entertaining show, For Good Measure alongside Nina Burleigh, James Geary, and Monique Truong.

In second grade, we made little books with rough gray construction-paper covers. Mine was about Rosa Parks. I remember getting inside the story at some point, writing quickly, with exclamation points! No!, said Rosa Parks when they tried to get her to leave her seat! That is my first memory of getting swept away—trying to convey something big. I also remember that I drew Martin Luther King in profile.

The last line of THE PLATEAU, for sure. But I can’t share that here, because it’s the whole book in a mustard seed. Another line I love, though, comes like a little poem at the end of a harrowing chapter, La Burle:

A prayer that looks like a tunnel of white, with a gray smudge of a man, digging.

And sounds like a voice, still and small, saying:

Everything will be as it should.

Gracious. Every writer has different gifts, different tools. Some bring virtuosity to the table, and a sense of play. Or depth of knowledge. Or the strength to work and rework a thing down to its beautiful nub. Or a most barbaric yawp. I think I bring a decent eye and ear and a lot of urge to say something. Advice might be: Try to understand your own tools, such as they really are—and your own necessity.

Trained as a chemist, Primo Levi had a perfect clarity to his eye. No single paragraph has hit me harder than an early one in his The Reawakening. It is ravaging in its simplicity and its truth.

For the longest time, while writing and editing, I could only read things like endless Anthony Trollope and Agatha Christie—nothing that could mess with my ear. The first thing I read, once it was safe to do so again, was the entire Harry Potter series, in a single gulp. It was immensely gratifying.

When I was leaving for Russia to do my PhD fieldwork in a tiny village, I told the director my anthropology department at the University of Montreal that I would be going to Russia to search for Alyosha Karamazov. Clearly, I was looking for him inside of myself, really.

Nina Burleigh is an award-winning journalist, and the author of six books, including the New York Times bestseller The Fatal Gift of Beauty and, most recently, Golden Handcuffs: The Secret History of Trump’s Women. On November 12th, she will be speaking at House of SpeakEasy’s Seriously Entertaining show, For Good Measure alongside James Geary, Maggie Paxson, and Monique Truong.   What is your… END_OF_DOCUMENT_TOKEN_TO_BE_REPLACED

James Geary is the author of four previous books, including the New York Times bestseller The World in a Phrase, and is the deputy curator at Harvard University’s Nieman Foundation for Journalism. A sought-after speaker and avid juggler, he lives near Boston, Massachusetts. On November 12th, he will be speaking at House of SpeakEasy’s Seriously Entertaining show, For… END_OF_DOCUMENT_TOKEN_TO_BE_REPLACED

Monique Truong is the author of three novels—The Book of Salt; Bitter in the Mouth; and now, The Sweetest Fruits, and her work has been published in fifteen countries. Her awards and honors include the PEN/Robert Bingham Fellowship, the New York Public Library Young Lions Award, the Asian American Literary Award, and the American Academy… END_OF_DOCUMENT_TOKEN_TO_BE_REPLACED

Kwanza Osajyefo is the author and creator of BLACK, a comic that asks: what if only black people had superpowers. Kwanza has been a part of the comics for nearly 20 years. Beginning his career as an online producer at Marvel before moving into other media roles. He later returned to comics and launched DC Comics’… END_OF_DOCUMENT_TOKEN_TO_BE_REPLACED

Torrey Maldonado is the author of the critically acclaimed novels Tight and Secret Saturdays. He is a teacher in Brooklyn, New York, where he was born and raised. His books reflect his students’ and his experiences. On September 17, he will be speaking at House of SpeakEasy’s Seriously Entertaining show, No Sleep Till, alongside William Dalrymple, Nicole Dennis-Benn, and Helen Phillips.… END_OF_DOCUMENT_TOKEN_TO_BE_REPLACED

Helen Phillips is the author of, most recently, the novel The Need. Her collection Some Possible Solutions received the 2017 John Gardner Fiction Book Award. Her novel The Beautiful Bureaucrat, a New York Times Notable Book of 2015, was a finalist for the Los Angeles Times Book Prize and the New York Public Library Young… END_OF_DOCUMENT_TOKEN_TO_BE_REPLACED

Trish Hall is a writer and journalist who worked for the New York Times for more than two decades. She initially joined the paper as a food reporter and eventually oversaw all the feature sections as a member of the masthead. For almost five years, she served as the Op Ed editor. She expanded the… END_OF_DOCUMENT_TOKEN_TO_BE_REPLACED

John Burnham Schwartz is the author of five acclaimed novels, including The Commoner, Claire Marvel, Bicycle Days, Reservation Road, which was made into a motion picture based on his screenplay, and his new novel, The Red Daughter. His books have been translated into two dozen languages, and his writing has appeared in many publications, including… END_OF_DOCUMENT_TOKEN_TO_BE_REPLACED

Darcey Steinke is the author of the New York Times Notable memoir Easter Everywhere, as well as five novels. In 2017 Maggie Nelson wrote a foreword for a new edition of Suicide Blonde. With Rick Moody, she edited Joyful Noise: The New Testament Revisited. Her books have been translated into ten languages, and her nonfiction… END_OF_DOCUMENT_TOKEN_TO_BE_REPLACED 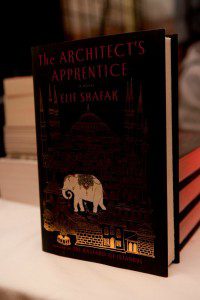