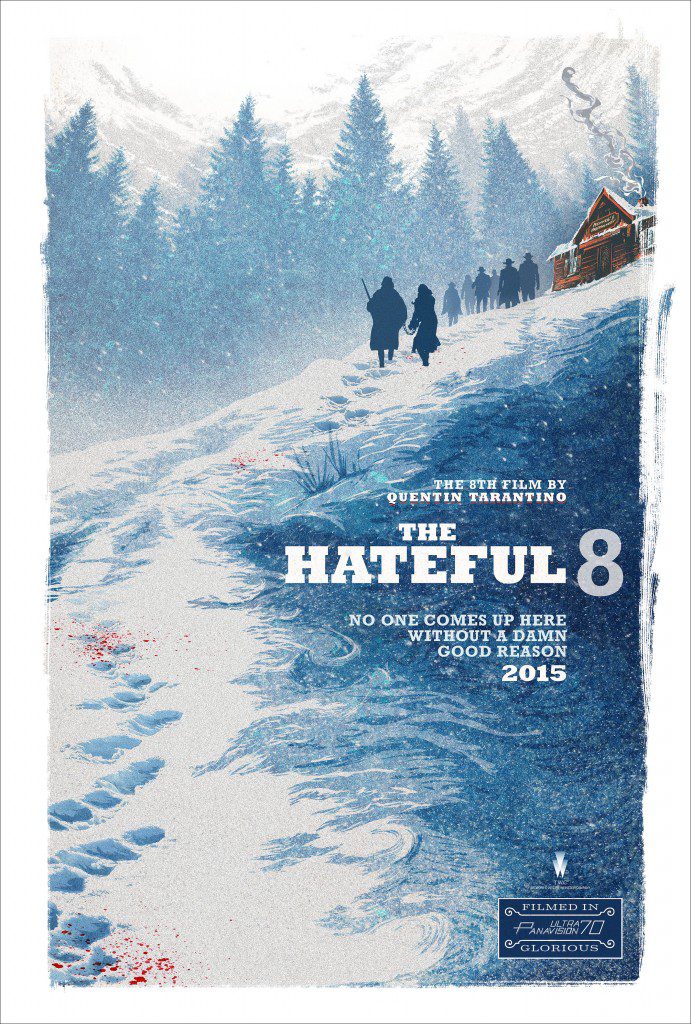 Most of the characters in Quentin Tarantino’s new movie, The Hateful Eight, seem to be governed by codes of behavior and philosophies that they hold to be more important than the sanctity of their own bodies. The vile and fantastic carnage that transpires is a direct consequence of their collective disregard for human life. This is not untypical of Tarantino’s work. From the greedy thieves of Reservoir Dogs to the perverted honor of Kill Bill‘s assassins, his characters have regularly indulged in acts of grotesque violence — and put themselves in danger of being its subject — in the service of various notions and aims concerning revenge or money. Death and mutilation occur when these notions reach their (il)logical conclusions. The special genius of The Hateful Eight, which makes it my favorite Tarantino movie since Kill Bill (and I’ll allow it may be better), lies in locking so many of these characters in a snowbound cabin in Wyoming and simply waiting to see what happens.

Kurt Russell is bounty hunter John Ruth, aka “The Hangman”. We meet him at the start of the movie as he’s transporting Jennifer Jason Leigh’s Daisy Domergue by stagecoach to her execution in Red Rock, Wyoming. Enter Major Marquis Warren (Samuel L. Jackson), another bounty hunter, whose horse has failed him and who needs a ride. Before long, they’ve been joined by Chris Mannix (Walton Goggins), who purports to be the new sheriff of Red Rock, on his way into town to pin his star to his coat. Their exchanges are reasonably good-humored, if unsettling to modern tastes: Mannix and Domergue call Warren “nigger” (a ubiquitous epithet), while Ruth communicates with Domergue through acts of nose-crunching violence. (This is not a movie that will fare well with the easily offended.) Team Stagecoach are forced by an oncoming blizzard to stop at outpost Minnie’s Haberdashery, potentially for a couple days. There they meet the rest of the eponymous Eight: the Mexican (Demian Bichir), the Cow Puncher (Michael Madsen), the Little Man (Tim Roth), and the Confederate (Bruce Dern). Tensions and hackles rise; suspicions are aroused; bullets are close behind.

Agatha Christie may seem like an odd point of reference, but she came to me several times during The Hateful Eight. There’s the snowbound setting, straight out of Murder on the Orient Express, a book which could also be read as a model for one of the later reveals. Moreover, at one point we learn that one of the Eight has somehow, in plain sight of the rest of the characters, poisoned the coffee — a scenario that recalls Christie’s descriptions of perfect crimes in The ABC Murders and Cards on the Table. And then there’s the endless, circumambulatory deductions of Jackson’s Warren — which make of him a sort of profane Poirot: a man who delights in toying with his prey and spots straight off that something’s amiss, even if he can’t quite say what.

Tarantino’s own filmography is also a point of reference — and a warning of things to come. The movie’s abnormal cruelty and the fact that it’s his eighth might as well have inspired its title. The presence of numerous familiar faces from his prior films; the threat (and irruption) of head-exploding violence; the narrative parlour games, pervasive dread, time slips, and plot twists we’ve come to expect from Tarantino: all help to create an atmosphere in which anything might happen; tension may only be defused through violence. The logic is that of Jacobean tragedy, and the conflicting designs of Tarantino’s protagonists beget a series of Mexican standoffs (another recurring trope) which, needless to say, tend not to end well.

The movie may seem to have no center of gravity, but this is one of its most profound strengths. For a start, there’s the slipperiness of the story, which is as well plotted as anything Agatha Christie ever wrote: we never know whom to believe or trust or why, and those who seem most reliable are yet capable of the most appalling behavior. While it will inevitably be read and criticized from numerous perspectives — by those who deplore the violence against Jennifer Jason Leigh and the abundant racism — The Hateful Eight is a line-up of such despicable people that one has little choice but to throw up one’s hands: they’re all as bad as each other. “It needs to be an ensemble where nobody is more important than anybody else,” Tarantino told Vulture in August. Were it not, the action would be intolerable, the cruelty perhaps too great. That there is this weightlessness at the film’s heart is what makes it palatable — and so much fun. The characters’ loyalty to their ideals is often what humanizes them, whether it’s the familial bond between Leigh and Channing Tatum (an inspired bit of stunt casting), Russell’s dogged insistence on bringing his bounty in alive, or Jackson’s righteously vengeful attitude towards Confederates. It’s also what provides the motivations for the deadly violence that structures the movie’s second half. The lowercase libertarianism that governs them the rest of the time makes them completely careless of their fellow lock-ins at Minnie’s Haberdashery.

See it, if you can, in “glorious 70mm”, and in the noisiest theater you can find. Ennio Morricone’s original score, pitched somewhere between western and horror, deserves to be heard with the music pumped right up, and you’ll not want to miss a word of Tarantino’s dialogue, which is typically inspired. His use of old-school Super Panavision 70 lends true majesty to the movie’s exteriors and interiors. His Wyoming recalls the widescreen of John Ford and Sergio Leone, often in seeming quotation marks, while the shooting of Minnie’s is a truly astonishing achievement, demonstrating a genius for stagecraft, a magician’s awareness of timing and space, and a pyrotechnician’s mastery of cruel geometry.

The Hateful Eight will not be to all tastes. But if you think you’d relish the brutality of a revenge tragedy plotted as an elaborately cruel Rube Goldberg machine, then you will thoroughly enjoy your three hours in what one character calls “this white hell”.