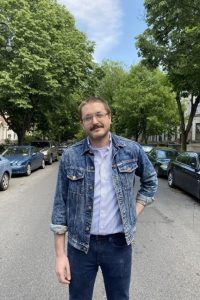 Ian Olasov is an adjunct professor and doctoral candidate at the City University of New York Graduate Center. His writing has appeared in Slate, Vox, Public Seminar, and elsewhere. He won the American Philosophical Association’s Public Philosophy Op-Ed Prize in 2016 and 2018. He runs the Ask a Philosopher booth in locations around New York City. His book Ask a Philosopher: Answers to Your Most Important (and Most Unexpected) Questions is out this month. He will be joining Michael Ian Black, Nick Flynn, and Liara Tamani on September 22 to tell stories tied to the theme “All Good Things.” Register here for the show!

All of my reading right now is pretty heavy, but when I want to take a load off, I read Wodehouse’s Jeeves and Psmith stories.

Hard to pick one!