Brooklyn Bounce: Jay-Z, Barclays Center, and the Return of the Nets

Jake Appleman’s Brooklyn Bounce: The Highs and Lows of Nets Basketball’s Historic First Season in the Borough (Scribner, 2014) is an engrossing account of the Nets’ 2012-3 season, starting with the opening of the Barclays Center and ending with the hiring of Jason Kidd, a former Net himself, as head coach in June last year. 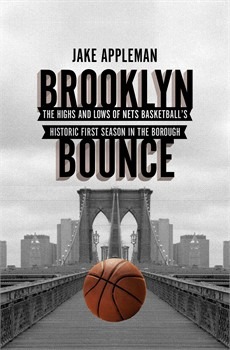 The game itself is front and centre. If you’re a Nets fan — or an ardent follower of the NBA more generally — there’s plenty here to entertain you. Appleman picks the season apart, analysing individual plays with the kind of athletic prose the best sports writing demands. He has an infectious stats-lust, both a hallmark of the Moneyball, FiveThirtyEight era we’re living in and the shibboleth that announces the true, die-hard fan. And if play-by-play fails to arouse, fear not, for Appleman also has a fine roster of supporting characters including Spike Lee, Nets owner Mikhail Prokhorov, Kim Kardashian, Barclays Center mastermind Bruce Ratner, and, of course, Beyoncé and Jay-Z.

A brief history. Born the New Jersey Americans in 1967, the team became the New York Nets a year later and stayed so for nearly a decade, becoming the New Jersey Nets soon after joining the NBA in 1976. Despite frequent relocation, they would keep that name for thirty-five years, only becoming the Brooklyn Nets on their move to Barclays Center in 2012. In the intervening years we meet the legendary Julius “Dr. J” Erving, sold by the Nets so they could afford to join the NBA; Micheal “Sugar” Ray Richardson, a rising star in the mid-eighties felled by substance-abuse violations; Dražen Petrović, tragically killed in a road accident in Germany in 1993; and many more. Appleman calls it “a mostly infamous history — weaving absurdity, mediocrity, heartbreak, humor, and frequent relocation”.

Today’s players are introduced in vivid sketches. Reggie Evans, “voted the league’s dirtiest player multiple times by a player’s poll conducted by Sports Illustrated” is nonetheless a “classic American success story” after an early life surrounded by crack dealers. There’s Brook Lopez, shooting the breeze and revealing nothing, riffing on “cartoons, Carly Rae Jepsen, Cool Runnings, The Mighty Ducks, Jay-Z, and Kanye West”. Also Deron Williams, “perpetually brooding”; Gerald Wallace, who tells the press about his fear of cities; Kris Humphries, enduring the censure of fans and Kanye alike for his failed marriage to Kim Kardashian; and Joe Johnson, who “often oozed the personality of the decoy that the Nets asked him to be on many offensive positions”.

The book is filled with striking scenes. In late 2012 Hurricane Sandy forced the Nets to hire eleven buses to get spectators from the Port Authority Bus Terminal to Fort Greene (“it felt like the opposite of a victory lap”). The Nets’ rivalry with the Knicks is inevitably high-octane stuff and makes for an excellent chapter. Shorter sequences include Appleman interviewing Mavericks owner Mark Cuban on a StairMaster and attending the MIT Sloan Sports Analytics Conference, where he is forced to endure the corny in-jokes of the statisticians who’re slowly taking over the game.

Brooklyn itself is also under the spotlight. At the concerts Jay-Z played to open Barclays Center, his set list featured songs from his 1996 debut, Reasonable Doubt, raising the spectre of a borough that was in the palace of the borough it’s becoming:

From the harsh reality of the streets that hip-hop documented and glorified to the land of yuppie stroller NASCAR and organic kale, much of Brooklyn was a new world. Myrtle Avenue, formerly known as “Murder Avenue,” was now home to a bike shop that sold homemade vegan nut milk. The apartment Biggie Smalls once lived in while selling crack was listed as $725,000 in April.

Though one can detect a scornful strain, Appleman professes himself agnostic on the question of gentrification and the cash being mainlined into Barclays Center and the Nets by Russian billionaire Prokhorov and real-estate mogul Ratner. Besides, as he acknowledges, while property prices go nuclear in Dumbo, there are areas elsewhere untouched by craft beer and Captain Haddock beards. Attending a match between the Boys & Girls High School Kangaroos of Bedford-Stuyvesant and the Abraham Lincoln Railsplitters of Coney Island, he comments, “to know a Brooklyn that gentrification ignored was to know the high school basketball scene”.

It’s too early to tell, of course, what impact the Nets and their new home will have on the broader community. What seems certain is that they will play a major part in the redefinition of the borough in the coming years. As the Nets won their very first game, against the Toronto Raptors:

there was something unbelievable, hypnotic, and somewhat brand-affirming about watching Beyoncé mouthing along to “BROOOOOK-LYN! BROOOOOK-LYN!” with nearly eighteen thousand people. So much of the Nets’ marketing push was about developing a brand voice. In the team’s first big-time moment it sounded like they had one.