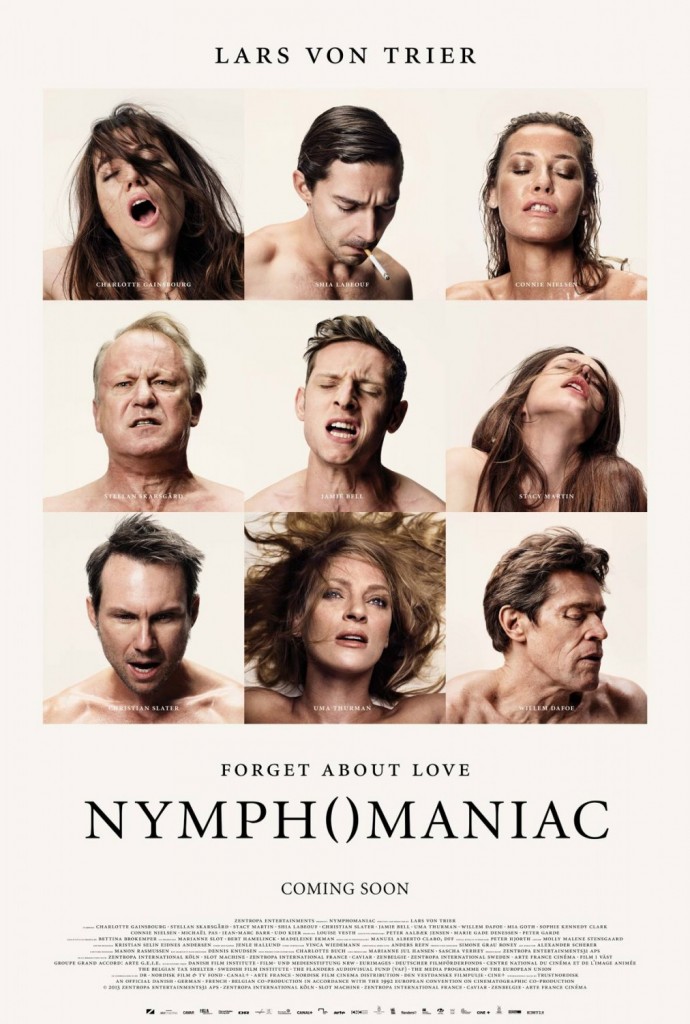 SPOILERS throughout! Also, well worth seeing Vol. I, which I reviewed here, before seeing Vol. II, which offers no recap for the uninitiated.

NYMPH()MANIAC Vol. II is a fist to the throat, a film raw with despair. It picks up where Vol. I left off, with Joe’s anguish over her sudden loss of sexual feeling, and documents the lengths to which she goes to feed her mania and achieve a sense of wholeness. Vol. II is the evil twin of Vol. I. A.O. Scott in the New York Times wrote that Vol. I is “(relatively speaking) the fun part”. Well, the playfulness and humour are largely gone, replaced with scenes of such deep unpleasantness that one of my fellow audience members was moved to say Damn! five times over the course of the film.

Monogamy with Jerôme (Shia LaBeouf) and motherhood have left Joe (Stacy Martin, then Charlotte Gainsbourg) unfulfilled. Her sexual appetites grow more extreme and more niche. She decides at first that she must attempt sex without possible recourse to verbal communication, and manages to procure a couple of African men (Kookie Ryan and Papou) from the street opposite her flat. Still not satisfied, she applies to become the object in a sadomasochistic salon run by the colourless, ascetic K (Jamie Bell, outstanding), who ties her up and lashes her but refuses any (so-called) conventional sexual contact. Her relationship with K ruins forever her life with Jerôme and their infant son, Marcel, while her pursuits at work result in her losing her job. She attends group therapy for sex addiction, refusing at first to refer to herself as an addict rather than a nymphomaniac. Increasingly marginalised, Joe slides into a new existence as a nefarious debt collector, exploiting debtors’ sexualities to achieve her ends. Her sinister boss, L (Willem Dafoe), encourages her to take on a young protégée, P (Mia Goth), which she does. Joe and P become lovers. One night, approaching their next job, Joe realises that she must collect an unpaid debt from Jerôme, whom she hasn’t seen for many years. The events that follow explain how she came to be lying beaten in the alley where Seligman (Stellan Skarsgård) found her at the start of Vol. I.

As in Vol. I, the relationship between Joe and Seligman is essentially sinner-confessor. Early on, we are told that Seligman is a virgin: “I’m innocent,” he claims, making explicit a link between sex and guilt that haunts the film. This is why, Joe believes, he is incapable of seeing her actions for what they are — he cannot relate to them. In a series of intertextual readings of Joe’s story, he interprets and transposes, veering into psychoanalytic, artistic and religious territory, often all at once. When Joe recalls an orgasm as a twelve-year-old that was accompanied by a religious vision, Seligman identifies the figures Joe sees as Valeria Messalina (the promiscuous wife of Emperor Claudius) and the Whore of Babylon. Later, she recalls Marcel’s birth, the baby grinning at her as he was delivered; Seligman, recalling Noah’s son Ham, insists this is another demonic omen.

Von Trier also plays intertextual games. Joe’s recollection of how she “became the piano teacher” is surely a nod to Michael Haneke’s The Piano Teacher, which has its own sadomasochistic protagonist. He also stages a sequence in which Marcel escapes his cot, much as Gainsbourg and Dafoe’s son in Antichrist did before falling to his death from a window at the start of that film. Von Trier even sets it to the same piece of music, Handel’s “Lascia ch’io pianga”, which I confess gave me a rather sick feeling.

There’s also the canny, unsettling use of Mozart’s Requiem in the Chapter 7 sequence when Joe attempts to remove or obscure everything that reminds her of sex from her flat: door knobs, paintings, light switches, books, her telephone, mirrors, taps…

NYMPH()MANIAC is as intellectually provocative as any of von Trier’s work. He probes boundaries surrounding discourse on race, gender politics and even paedophilia (the ninety-five percent of paedophiles who don’t act on their urges “deserve a bloody medal”, says Joe). The acting and narrative style flirt with a kind of improvised amateurishness similar to that which marked the excellent Breaking the Waves and Dancer in the Dark. Accents and filming locations have no regard for continuity. It’s unclear when the story is supposed to be set. The dialogue is weirdly literary. Beyond all that, the film occasionally veers into fantasy (as when the twelve-year-old Joe levitates while orgasming). In all these ways and more, von Trier presents major aesthetic challenges to the prevalent naturalism in cinema.

His work has always had this Brechtian flavour, and it feels particularly developed in NYMPH()MANIAC. When Joe hits out at her new sex-addict colleagues at therapy, she attacks the bourgeois values they seek to serve in punishing themselves for their desires. The film itself — in flirting with a pornographic mode of representation — attacks the bourgeois values of Hollywood entertainment. It won’t be to everyone’s taste; it’s often pretty visceral stuff. But as an exploration of human desire and sexuality — as well as loneliness and despair — I struggle to think of a more stimulating or fertile text, all puns intended.

And I don’t want to ruin the end, but that’s a whole other story too.

← Prev: Brooklyn Bounce: Jay-Z, Barclays Center, and the Return of the Nets Next: How can it be wrong when it feels so right? Daniel Bergner's "The Other Side of Desire" →