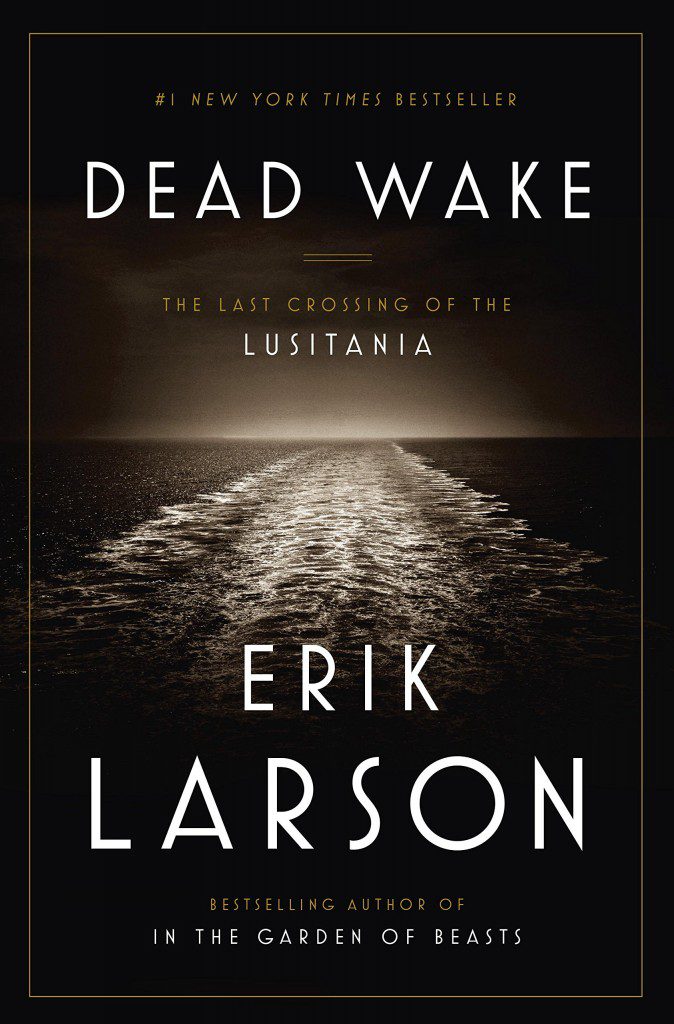 In six heart-stopping pages in the middle of Dead Wake, Erik Larson appears to suspend time in order to watch the deadly torpedo launched from German submarine U-20 shoot through the sea toward the doomed ocean liner Lusitania. In fact, the torpedo was only moving at about five miles per hour (reader, I can run faster), and its slow approach gave many of the ship’s passengers time to register both its vicious beauty and its coming intersection with their own fates. Initially, Larson tells us, “A number of officers raised binoculars and speculated that the object might indeed be a buoy, or a porpoise, or a fragment of drifting debris. No one expressed concern.” As it moved closer, though, its true nature became apparent and many panicked. Not Connecticut salesman James Brooks:

He saw the body of the torpedo moving well ahead of the wake, through water he described as being “a beautiful green.” The torpedo “was covered with a silvery phosphorescence, you might term it, which was caused by the air escaping from the motors.”

He said, “It was a beautiful sight.”

In these six pages, we see the glint of what Martin Amis calls, in a different context, “the worldflash of a coming future”. Attacks on civilian vessels were still an unpleasant novelty in the rules of engagement; the idea that the Germans would even hope to sink a ship of the Lusitania‘s size was absurd. And yet they had telegraphed their intention to do just that in a message printed the morning of departure in the New York World (with horrible irony, it appeared next to a Cunard ad). The attack on the Lusitania — and the cruel fluke that allowed it to sink in just eighteen minutes — changed everything.

Using survivor testimonies, telegrams, archive film, intercepted wireless messages, submarine logs, and a wealth of secondary reading, Larson constructs a sort of Cinemascope account of the Lusitania‘s last crossing. Dozens of personal accounts and perspectives are woven into a narrative that also retains a keen sense of the grand sweep of history. Larson introduces us to the ship’s captain, William Thomas Turner, an old-school sea-dog and Cunard veteran (as well as their standing record-holder for transatlantic round-trips). We’re right there with the passengers as they board the ship on the morning of May 1; we’re in their cabins and at their dinner tables, privy to their gossip and trivial concerns. On the other side, Larson takes us right into the fetid belly of Unterseeboot 20, where we meet Kptl. Walter Schwieger, the handsome young naval officer whose combat stats reveal an increasingly ruthless nature. We’re also allowed to peek through the keyhole of Room 40, the secret heart of the UK’s cryptanalysis efforts, located in the Admiralty’s Old Building, where First Lord Winston Churchill was overseeing the increasingly embattled British navy. Finally, through the love letters of Woodrow Wilson and Edith Galt, we’re privy to the personal drama going on in the White House at the time, and the deep ambivalence the American president felt towards the war in Europe.

In Larson’s account, just as the Lusitania steamed out of New York Harbor, British intelligence lost track of U-20. From then on, all we know from under the sea is what Schwieger logged and Room 40 was able to infer from the growing number of shipwrecks in the waters surrounding the British Isles.

Meanwhile, above water, as the passengers onboard the luxurious cruise liner got to know one another, there was talk of submarines and torpedoes but its tenor was scornful. All types of people were sailing — “They brought their best clothes, and in some cases, their only clothes” — even if the historical record denies access to the thoughts of many of the sailors and those in the lower classes of travel. Still, what was left behind leaves more than enough sumptuous detail for a terrific book. It was a different age, and Larson has a great ear for it. A ship’s captain then had to be “three parts mariner, one part club director”, charming first class with his dinner-table patter. Wealthier passengers had been known to bring lion cubs aboard bigger liners; the animals were permitted to roam the decks and be petted by children. The passenger manifest for the Lusitania‘s final voyage included a Vanderbilt, a suffragette, a world-renowned theater impresario, a wealthy wine importer known as the “Champagne King”, and a Boston book collector carrying a stash of valuable Thackerayana and a copy of A Christmas Carol annotated by Dickens himself. The stoicism of some of these passengers when the ship later started to sink also feels redolent of a bygone era, like the string quartet that played itself out on the deck of the Titanic three years earlier.

In the material of reality Larson finds the satisfying shape of fiction. There’s dramatic irony everywhere he looks, in chance remarks and details (like the name of the unfortunate Luck family, none of whom would survive), in the telegram Alfred Vanderbilt receives in New York (“The Lusitania is doomed… Do not sail on her”), and in the unfortunate coincidence that Captain Turner was called upon to give evidence in a legal case relating to the Titanic the day before he sailed. Then there’s the ship’s chief purser, for whom the Lusitania‘s final crossing was set to be his last before retirement. Larson uses the fruits of his research to cut skilfully between different scenes, ratcheting up the tension as U-20 fires on boats that could, for all we know, be the Lusitania… only to discover the next page that they’re not. This may be editorial license on his part, but it also brilliantly dramatizes the chanciness that governed so many aspects of the catastrophe. After all, the scepticism of the passengers was in some ways not misplaced: in those early days of submarine warfare, sixty percent of torpedo launches failed, and the odds of a strike on the Lusitania proving fatal were extremely low. In addition, timing was everything: a few minutes either way, and the faster-moving Lusitania may have been out of range of the U-20’s weaponry. (Two trivial delays back in New York, which cost the ship two or three hours, take on extra significance in the light of this.)

History is filled with what-ifs. In Dead Wake, Erik Larson takes a pivotal moment in world history — one which would lead, indirectly, to the United States’ entry into the Great War — and teases out the agonies of circumstance, all the variables and contingencies that allowed what happened to happen, against all odds. Thanks to his meticulous research, the book also stands as a fine tribute to the victims of that fateful crossing. It’s now more than a century since the Lusitania sank, yet the words spoken by President Wilson to Congress in 1917, when the US finally joined the Allies in Europe, feel eerily contemporary: “The world,” he said, “must be made safe for democracy.” As a new evil reaches its tentacles across Europe, America is once again mired in ambivalence, caught between deeply opposed foreign-policy doctrines. What would it take to provoke decisive action?

Erik Larson will appear at the 2016 Seriously Entertaining gala, I’ll Have Another, at City Winery NYC on February 1.

← Prev: A Game of Thrones Next: I Want To Believe →