Phineas and Ferb… and Dan Povenmire

So begins every episode of the Disney Channel’s smash hit Phineas and Ferb, which since 2007 has entertained millions of children worldwide. Four seasons, a TV movie, and crossover specials featuring characters from Marvel Comics and Star Wars later, it’s the channel’s longest-running original series. It has a large and devoted following among adults as well as kids — its guest stars over the years have included Malcolm McDowell, Damian Lewis, Sandra Oh, Allison Janney, Ben Stiller, and, surreally, most of the principal cast of The Rocky Horror Picture Show. Jake Gyllenhaal and Chaka Khan are fans. Its creators, Jeff “Swampy” Marsh and Dan Povenmire, pitched and re-pitched the show for sixteen years before it was finally picked up; their confidence was evidently well placed.

So who are Phineas and Ferb? Phineas Flynn is a tenacious, loquacious, enterprising, triangle-headed little American boy whose mission in life is to ensure that things are never dull. Ferb Fletcher is his rectangle-headed British half-brother (voiced by Thomas Sangster, whom you may remember as the lovelorn son of Liam Neeson in Love Actually), the laconic sidekick in the boys’ outrageous adventures. (Ferb usually only says a line or two per episode, but everything he has to say is brilliant.) There’s also Perry, the boys’ pet platypus, who leads a double life as a secret agent; their big sister, Candace, who spends most of her time trying to get them into trouble; and the evil but mostly incompetent Dr. Doofenshmirtz, voiced by Povenmire himself, whose plans for domination of the tri-state area are thwarted by Perry. As the New York Times wrote in 2008, “Imagine ‘Family Guy’ with an espionage subplot and a big dose of magical realism, and you have ‘Phineas and Ferb.'” 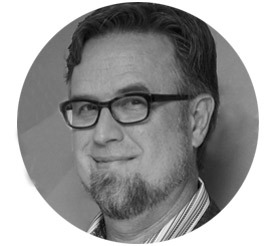 Dan Povenmire is in fact a veteran of Family Guy. He directed thirteen episodes during the show’s first five seasons, including the superb Back to the Future spoof “Meet the Quagmires,” in which Peter travels back to 1984 to win back Lois’s heart after an earlier time-travelling incident left him accidentally married to Molly Ringwald. He also oversaw many of the big musical sequences in the show’s first few years; the Emmy-nominated episode “Road to Rhode Island,” which features a hilarious Brian-Stewie duet and is one of the series’ all-time highest rated, was his directorial debut on the show. Traces of Family Guy in the much more family-friendly Phineas and Ferb include its brilliant cutaway gags and narrative digressions.

In the very first episode of Phineas and Ferb, which Povenmire wrote, our heroes are faced with one of those endless summer breaks that childhood seems to consist of. “Boredom is something up with which I will not put,” says Phineas. “No school for three months? Our lives should be a rollercoaster!” Picking up on his own metaphor, Phineas decides that they should actually build one in their backyard. “Aren’t you a little young…” begins a phrase well worn by the series’ incidental characters, here spoken by a rollercoaster-parts salesman: “Aren’t you a little young to be a rollercoaster engineer?”

ENGINEER: Well, I must say I’m very impressed. The forms all seem to be in order, although I’ve never seen them filled out in crayon before…

Before I quote it in its entirety, here’s the episode in full:

There’s a lot for kids to learn from this pair. Phineas and Ferb are precocious and smart but friendly and popular. They live uncomplicatedly and unremarkably in a so-called blended family. They get things done, they do the right thing. But if the medium is indeed the message, there’s also something to be said for their good old-fashioned cartoon existence. In a market glutted with films and TV that bear the soulless polish of committee writing and flawless CGI, Phineas and Ferb live in gloriously defiant 2D. Indeed their first movie, Phineas and Ferb the Movie: Across the 2nd Dimension, was promoted on the back of its being “in fabulous 2D.” The show’s simple design and anarchic humour, and its characters’ “shenanigans,” belong to a DIY world that many feared lost. In an interview with AL.com, Povenmire suggests that the show is indeed designed, to an extent, to encourage kids to leave the couch behind. At any rate, the boys’ attempts to stave off boredom never seem to involve plonking down in front of the TV. “The one good thing I’ve heard from parents over and over about our show is that it does tend to inspire kids to get away from the TV and go out and do something or build something,” he said. “At its core, it is very anti-television.”

Dan Povenmire is one of our Seriously Entertaining guests at No Satisfaction at City Winery alongside Ruby Wax, Hooman Majd, Philip Gourevitch and Sarah Lewis.

Dan Povenmire is best known as the co-creator of the animated television series Phineas and Ferb. He grew up in Alabama, where he spent his youth drawing and making movies. He attended the University of South Alabama and USC School of Cinematic Art before embarking on a prolific career as a writer, television director, producer, storyboard artist and actor. He has worked on animated series including Hey Arnold, The Simpsons, Rocko’s Modern Life, SpongeBob SquarePants, and Family Guy, for which he was nominated for an Annie in 2005. He has also been nominated for an Emmy and a BAFTA.

← Prev: Love in the Time of Genocide Next: The Lie of Remembrance: Philip Gourevitch on the Rwandan Genocide →