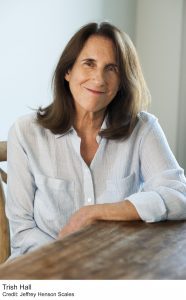 Trish Hall is a writer and journalist who worked for the New York Times for more than two decades. She initially joined the paper as a food reporter and eventually oversaw all the feature sections as a member of the masthead. For almost five years, she served as the Op Ed editor. She expanded the reach and the nature of digital offerings, winning an Emmy for an Op Doc produced by her team. She also created the Sunday Review, which since its inception has been one of the most popular sections at the Times. Her book for Norton, Writing to Persuade, was published in June. She lives in New York City.

On June 18, she will be speaking at House of SpeakEasy’s Seriously Entertaining show, The Song Sings Itself, alongside Michael Bronski, John Burnham Schwartz, and Darcey Steinke.  We spoke to Trish ahead of the show.

I asked for a diary every year for Christmas, and every year my mother complied. I think I started my first one when I was seven. I wrote entries every day for a few weeks and then stopped. They were earth-shattering entries like, “Got up. Washed my hair.” Sometimes I berated myself for not writing. But I would often say, “I will be back tomorrow, I promise.” 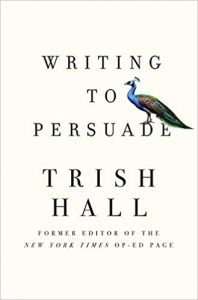 You mean from my own book? What kind of a miserable self-hating writer would I be if I liked my own writing so much that I had a favorite line?

Everyone says it, but really it’s true. Write, write, write, in every form possible. Eventually something will seem just right for you.

I don’t dig out old books lost to history in second-hand stores and discover someone we should all know…. I’m allergic to dust, which I use to defend my bourgeouis desire for new clothes, new books, new shoes. I recently read Lena Andersson’s Acts of Infidelity. Andersson is a Swedish journalist and novelist, I think her writing is extraordinary and while she is hardly unknown, I hadn’t heard of her until I saw her most recent book in paperback at Three Lives, the bookstore near me in Greenwich Village where I pick up nearly everything I read.