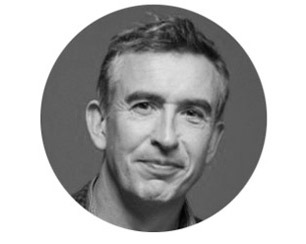 JANE
I think what they did to you was evil.

MARTIN
No — evil’s good.
(They stare at him)

You can read Philomena: A Screenplay by Steve Coogan and Jeff Pope, based on the book by Martin Sixsmith, on the Weinstein Company website here. As with most published screenplays, there are some discrepancies between this and the final film.

We’re extremely excited to be welcoming Steve Coogan at our next Seriously Entertaining event, “This Is Not A Man”, on February 24 (tickets on sale here), and delighted to be able to congratulate him on his Best Adapted Screenplay Oscar nomination for Philomena! Here we take a look at his award-winning work on the movie.

Steve Coogan and Jeff Pope’s screenplay for Philomena (dir. Stephen Frears, The Weinstein Company, 2013), was adapted from Martin Sixsmith‘s nonfiction book The Lost Child of Philomena Lee (Macmillan, 2009). It’s one of six Best Picture nominees at this year’s Academy Awards based on true events but one of only two (the other being The Wolf of Wall Street) that actively interrogates its “real-life” nature. Indeed, I’d argue that what makes Coogan and Pope’s screenplay so powerful is the tension between the simple “human interest” story Sixsmith sets out to tell and the complicated, troubling story he finds.

The film begins with a montage of news clips about Martin Sixsmith’s professional downfall. Played by Coogan, Martin’s a former BBC journalist who went to work in communications for the Blair administration but was sacked from the government following the leak of an unfortunate email exchange and forced to eat “humble pie with a side order of grovel sauce”. (This soundbite is actually from a contemporaneous BBC report, but sounds, ironically, as it it was lifted straight from an earlier Coogan project, the spoof current affairs show The Day Today). Martin is jaded, the kind of man for whom “human interest tends to be a euphemism for stories about vulnerable, weak-minded, ignorant, people to fill up the pages of newspapers read by vulnerable, weak-minded, ignorant people.” In classic Hollywood style, his assumptions and prejudices are to be overturned when he meets his “human interest” subject, Philomena Lee (Judi Dench), who fifty years previously was forced to give up her son for adoption and hasn’t seen him since.

The species of journalism represented in the film is characterised by its direct appeal to emotion, and much of the dialogue Coogan gives himself is correspondingly blunt and plot-oriented: “Why did you keep this a secret for fifty years?” he asks Philomena. This self-reflexive approach, laying bare the story’s manipulative mechanics, reveals the gap between the neat requirements of the simple “sob story” and the complexity of “real” life. People aren’t archetypes and the plot of the movie is not a movie plot.

SALLY [Sixsmith’s editor]
Who are the goodies, who are the baddies?

MARTIN
Erm… okay, it’s about a little old Irish lady, retired nurse, trying to find her baby son who was taken… ripped away from her at birth, by… (Suddenly comes to him) … evil nuns.

SALLY
So how does it end? (Before he can answer) — and it’s got to be really happy or really sad. What I don’t want is some in-the-middle bullshit, yeh?

Without having to issue a spoiler alert, it’s safe to say that what Martin and Philomena discover defies any such easy classification. It’s an incredible story, with coincidences and revelations that would be hard to swallow in a straightforwardly fictional film. Dramatic licence is taken (Philomena did not really join Martin on his fact-finding trip to the US, for instance), but it’s licence that Coogan describes as “ethical”. In this Guardian interview (OK, spoiler alert), he and Sixsmith discuss the process of adaptation, from life to book to film:

Both Judi Dench as Philomena and Steve Coogan as Martin bring great warmth and humour to a film that in less assured hands could have been gruelling. The scenes at Ros Cré, where Philomena raises her son for the first few years of his life, recall Peter Mullan’s The Magdalene Sisters (2002), which also covers the fate of Ireland’s “fallen women” and is a brilliant but tough watch. In an interview with USA Today, Coogan explained his different approach to the subject matter. “I wanted people to leave the cinema feeling lifted up by Philomena’s attitude about what happened to her,” he said. “[But] I didn’t want to sugarcoat it, either.” The resulting film, which is certainly painful at times, is all the more powerful for its humorous or uplifting moments, hinting at the possibility of forgiveness and redemption. In this way its style and temperament reflect something of Philomena’s own compassion. And given her story, one couldn’t ask for something more precious.

From all the team at the House of SpeakEasy, we wish Steve Coogan and Jeff Pope the very best of luck at the 86th Academy Awards on March 2!

You can buy tickets for “This Is Not A Man”, featuring Steve Coogan, Uma Thurman, Anton Sword, Tom Reiss, Dana Vachon and Susan Minot, here.