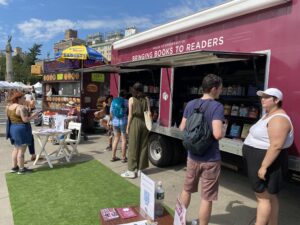 The Bookmobile at Small Press Flea, 2022

On Saturday, August 20th, the Bookmobile rolled up onto the concourse of the Grand Army branch of the Brooklyn Public Library for the annual Small Press Flea (SPF). Throughout the day, hundreds of book lovers of all stripes mingled with the regular patrons of the weekly farmer’s market happening across the street.

The SPF debuted nine years ago, a collaboration between a dozen or so independent publishers. Since then, the event has grown exponentially, drawing over 30 vendors, including independent publishers, magazines, and presses, such as One Story, n+1, and A Public Space. It attracts Brooklyn’s literari from all boroughs. It was no coincidence that SpeakEasy staffers kept seeing familiar faces from editors at Reckless Books and Archipelago pass by.

Unlike the majority of our bookmobile deployments, where we distribute brand new free books to communities in need, the SPF presented a rare opportunity for us to sell books., A portion of the proceeds go directly to support our year-round outreach programs, embodied by the Bookmobile itself.. We partnered with Greenlight Books who provided us books at bargain rates for the bookworm on a budget.

This year, we featured titles from authors who had recently performed at SpeakEasy’s Seriously Entertaining shows at Joe’s Pub in the East Village. These included Greenland by David Santos Donaldson’s, Smile and Love Poems in Quarantine by Sarah Ruhl, The Other Black Girl by Zakiya Dalila Harris, as well as other authors we have featured on stage and in schools, such as the graphic memoir Good Talk by Mira Jacob, who spoke at Joe’s in January 2020.

I was struck by visitors’ reactions’ to the various books on display. In terms of fiction, particularly popular was Xochitl Gonzalez’s Olga Dies Dreaming, which follows a 30-something wedding planner and her brother against the backdrop of the 2017 Hurricane Maria in their family’s native Puerto Rico. I was thrilled to see Braiding Sweetgrass (by Robin Wall Kimmerer) on the truck’s shelves, and equally excited that the memoir Please Miss: A Heartbreaking Work of Staggering Penis by Grace Lavery was out as well; Grace performed for Seriously Entertaining earlier earlier this year (and was a professor at my alma mater). 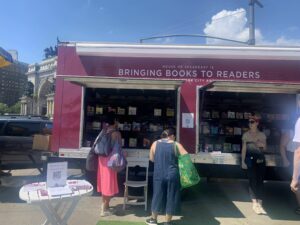 After making their rounds with independent publishers tabling at the event, visitors were able to visit our truck, learn about our outreach efforts, and pick up a book of their own if they so-pleased.

At one point during the day, I got to speak with art historian and literary critic Jan Castro, who reviewed Maaza Mengiste’s The Shadow King, also on display, for the American Book Review. She’d read it favorably, and shared the piece with me afterwards. The novel follows Mussolini’s 1935 invasion of Ethiopia via a friendship of two Ethiopian women: Hirut and Aster. Of the two, Jan writes, “They somehow rise from their respective positions in a culture dominated by family traditions, class, and male hierarchies of military and political leadership. The choruses, photos, and classic myths in the novel all suggest metaphorically that not only has their time come, but ours as well — if we can gain the skills, tools, and resources to rise up.”

The theme of “rising up,” as one might expect at a festival celebrating small, New York-based presses, came up repeatedly in my conversations. I also chatted with Bruce McPherson, founder of McPherson & Co. of Kingston, NY. I asked him what he would, of the offerings on the table, recommend. He pointed me towards two 20th century female writers, both hidden gems (under-recognized giant is an oxymoron) in their fields: French writer and New Yorker Ursule Molinaro and English modernist Mary Butts. He praised the former’s reinvention of tragic Greek tropes of femininity, and her contemporary cultural analyses drawn from them. He called the latter a classical myth-handler in her own right. I left with a copy of Butts’ The Taverner Novels.

For all the bustle of the day, the event wound down gradually, with crowds thinning at dusk. As we packed up the remaining titles, several friendly publishers stopped to say goodbye and offer their support. Verso Books even donated a box of books, which took a dedicated place on our shelves for the next couple of events.

We were thankful for the donation, a testament to our shared commitment to the importance of free distribution of knowledge.

END_OF_DOCUMENT_TOKEN_TO_BE_REPLACED

The Bookmobile for Fifth of July On Saturday, July 9, the SpeakEasy Bookmobile visited Weeksville Heritage Center at the border of Crown Heights and Bed-Stuy, in celebration of the Fifth of July. Fifth celebrations date back to 1827, when Black New Yorkers joined in...

END_OF_DOCUMENT_TOKEN_TO_BE_REPLACED

On Loving a Place

END_OF_DOCUMENT_TOKEN_TO_BE_REPLACED

Larry Olmsted is an award-winning journalist who has been a visiting professor at Dartmouth College, where he taught nonfiction writing. He is the author of the New York Times bestseller Real Food / Fake Food and Getting into Guinness, a history of the Guinness Book...

END_OF_DOCUMENT_TOKEN_TO_BE_REPLACED

Michelle Nijhuis is a project editor at The Atlantic, a contributing editor at High Country News, and an award-winning reporter whose work has been published in National Geographic and the New York Times Magazine. She is co-editor of The Science Writers’ Handbook and...

END_OF_DOCUMENT_TOKEN_TO_BE_REPLACED

A Paul and Daisy Soros fellow, Sanjena Sathian is a 2019 graduate of the Iowa Writers’ Workshop. She has worked as a reporter in Mumbai and San Francisco, with nonfiction bylines for The New Yorker, The New York Times, Food & Wine, The Boston Globe, The San...

END_OF_DOCUMENT_TOKEN_TO_BE_REPLACED

Mary H. K. Choi is a writer for The New York Times, GQ, Wired, and The Atlantic. She has written comics for Marvel and DC, as well as a collection of essays called Oh, Never Mind. Her novels Emergency Contact and Permanent Record were New York Times bestsellers. She...

END_OF_DOCUMENT_TOKEN_TO_BE_REPLACED

Avi Loeb is the former chair of the astronomy department at Harvard University (2011-2020), founding director of Harvard’s Black Hole Initiative and director of the Institute for Theory and Computation at the Harvard-Smithsonian Center for Astrophysics. He also chairs...

END_OF_DOCUMENT_TOKEN_TO_BE_REPLACED

Nic Stone is an Atlanta native and a Spelman College graduate. Her debut novel for young adults, Dear Martin, and her debut middle-grade novel, Clean Getaway, were both New York Times bestsellers. She is also the author of Odd One Out, a novel about discovering...