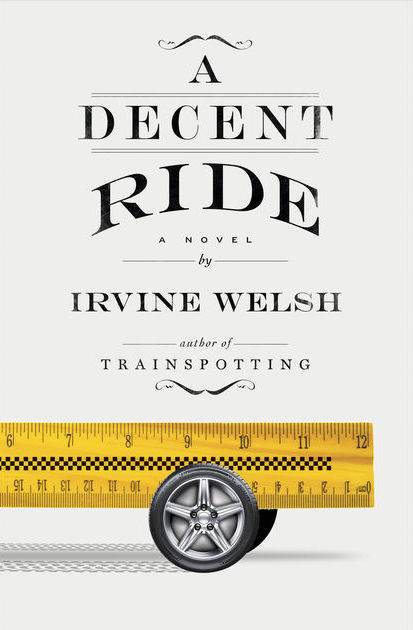 “Drivin a taxi is the best joab ah’ve hud in ma puff,” remarks “Juice” Terry Lawson early on in Irvine Welsh‘s new novel, A Decent Ride. But this is not an ode to honest labor: “It’s best in August,” he continues, “wi aw the snobby tourist rides in the toon, but this time’s barry n aw, cause the festive period’s roond the corner n fanny are stoatin aboot rat-arsed.” Yes, after a darkly racy stopover in Miami for his last book, The Sex Lives of Siamese Twins, Welsh is back in the familiarly grimy Edinburgh streets of his best-known work, including Trainspotting and Glue, the 2001 novel which first introduced the world to the charming Terry. Welsh’s characters, here as elsewhere, are rogues, braggarts, scofflaws and villains; their lives are fuelled by booze, drugs, casual sex, and crime. But despite the ubiquitous indecency, Welsh’s work has always been driven by a fierce social conscience and a compassion for this particular world that’s absent in most other contemporary media. A Decent Ride, which refers both to Terry’s job as a taxi driver and his enthusiasm for sex, is in the end a rather more decent book than it first appears. There’s a kind heart hidden behind the throbbing boners.

Though episodic in structure, A Decent Ride is carefully and subtly plotted. The shifting perspectives allow Welsh to pull a number of sleight-of-hand moves that range from theft to the death of a major character. The novel may amble along like a shaggy-dog story (key word not dog) but, all the way through, like Terry with his new-found golfing skills, Welsh is in fact lining up a series of perfect putts for the last few chapters.

Ronald Checker is the braggadocious American reality-TV billionaire who gets into Terry’s cab at the start of the book and sparks much of what follows. He’s in “Skatlin” for a business deal but’s quickly sidetracked by his particular white whale: the dream of owning the only three bottles in the world of Bowcullen Trinity whisky. On meeting the brash American, Terry sees only dollar signs and gleefully accepts the compromise of Ronnie’s company in return for a hefty pay-check as a private driver. He’s also found himself overseeing a “sauna” (= brothel) on behalf of an ancient antagonist he refers to as “The Poof”, and quickly finds himself involved in the lives of its workers, notably Jinty Magdalen (“tae me it’s a wee bit extra jist for lying on yir back or suckin oan something”), whose intellectually disabled boyfriend, Jonty, may or may not be Terry’s half-brother. These set-ups will all be disrupted by the irruption of Hurricane Bawbag, a weather event met with terror by Ronnie and scorn by Scotland’s smokers. But Bawbag is nothing to Terry compared to the news of a developing coronary condition that may prevent him from ever having sex again.

For Welsh’s fans, A Decent Ride is an opportunity to enter a world untouched by contemporary identity politics, decorum (at least in the traditional sense), or political correctness. Indeed, his work is much like the Pub With No Name, where some of the book’s essential action takes place:

To some, most of whom had never set foot inside, The Pub With No Name has an unsavoury, even notorious edge: an ugly, brutal hole full of knuckle-dragging dinosaurs representing a darker age. To others, those who frequent the bar, it is simply a place of liberation: an old-school boozer, free from the tiresome ministrations of the professional moralisers and disapprovers, and satisfyingly resistant to the bland brush of modernity.

A more concise rebuttal of his more prudish critics could hardly be made. To object to Welsh’s profane humor is to deny yourself one of the greatest pleasures of his work. “Her nickname’s ‘Venue 69’ cause she’s that busy during the festival,” Terry remarks of one of the women at the sauna. “As ah ehwis say,” he remarks later: “fuck off means naw, naw means mibbe, mibbe means aye n aye means anal. Guaranteed!” The shock of Welsh’s punchlines, which lies in the disturbance of the social mores that govern the “correct” response to human-trafficking, say, or sexual conduct, is uncompromising because they’re so often delivered in the claustrophobic first-person chapters. We’re uncomfortable because we’re looking at the world through the eyes of “Juice” Terry or Jonty MacKay or Ronnie Checker. The consequent disorientation is usually played for laughs but there are moments of real pathos, even during the grossest passages, like the chapter when Jonty, after one last-ditch attempt at sex with Jinty’s corpse, finally concedes that she’s dead. The “hidden, bleak chambers” that even the unsubtle Ronnie can discern in his “Skatch” brethren are Welsh’s subject proper.

A Decent Ride is many things. It’s an epic ode to the libido, an often-rapturous celebration of the joys of sex. It’s a lyrical tour of contemporary Scottish politics, with Terry’s sex-starved penis at one stage making its own bid for independence. And for the Chicago-dwelling Welsh, it’s also a comedy of transatlantic manners (“I try to pay but they won’t take it,” moans Ronnie, unfamiliar with the NHS). But most deliriously, and at its best, it’s exactly what it proclaims itself to be.

Irvine Welsh will appear at the 2016 Seriously Entertaining gala, I’ll Have Another, at City Winery NYC on February 1. The gala is SOLD OUT.

← Prev: Sell/Buy/Date Next: A Game of Thrones →