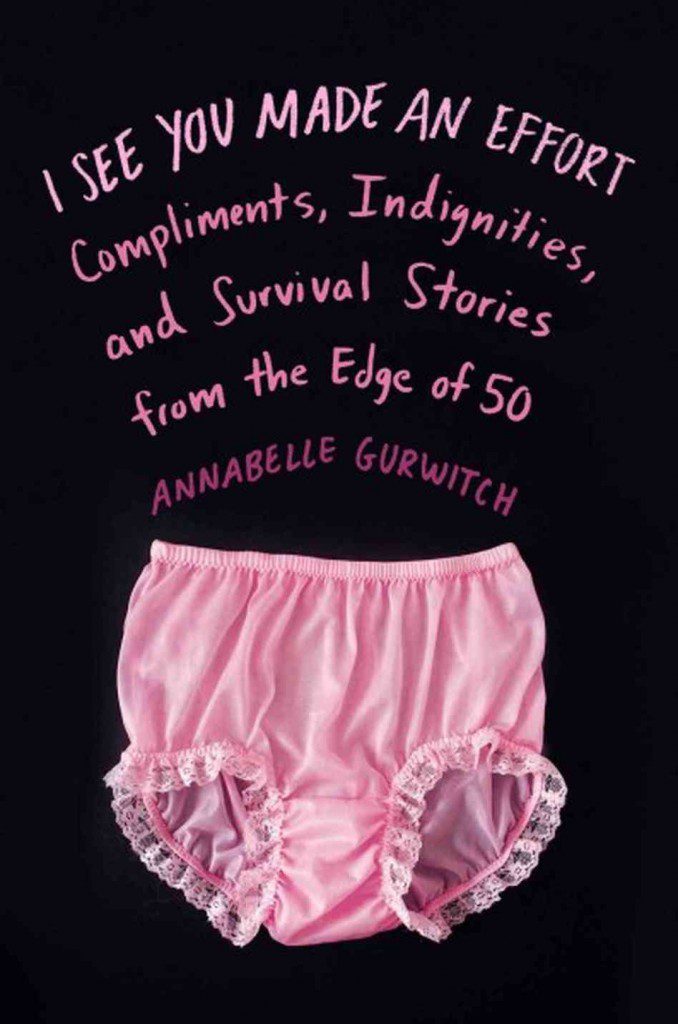 I See You Made An Effort: Compliments, Indignities, and Survival Stories From the Edge of 50
Annabelle Gurwitch
Blue Rider Press/Penguin Random House, 2014; 256pp

“Maintaining a sense of humor is the final frontier or at least our saving grace as we age.”

Every seven and a half seconds, an American turns fifty. In her latest hilarious book, I See You Made An Effort, actress and writer Annabelle Gurwitch opens up about the many implications that passing over the threshold of fiftydom has had for her. Whether it’s the unfortunate synchrony of menopause and raising an adolescent boy, the temptations and pitfalls of having work done, or the increasingly depressing career options left open to her in the film and TV industry, she has a brilliantly funny story or flight of fancy to reassure you that with a little laughter we can all get through this together.

As subject matter, ageing offers boundless opportunities for excruciating self-revelation. Gurwitch never misses a trick, whether discussing the leakage she experiences when trying out her son’s trampoline or her tentative steps onto the slippery slope of cosmetic surgery. “I’ve filled, frozen and ultrasounded,” she writes, “all in the name of what is often referred to as ‘maintenance.'” Trouble is, she adds, once the swelling goes down “you look exactly the same as you did the day you forked over an amount that an entire family in Turkmenistan could live on for a year.” As she points out, however, if you work in Hollywood and your neck isn’t as fantastic as Susan Sarandon’s, you can find yourself at the sharp end of one of the industry’s best-documented demographic cruelties. Employment opportunities for women in their fifties are treated with brutal comic economy:

My actress friends and I were both thrilled and horrified to find ourselves auditioning for a product that treats menopausal dry vagina. “Let’s ask them to pay us in a lifetime supply,” we laughed, and then some tears were shed. “Are we there yet?” Yes, we are.

There’s a fabulous chapter about the making of an ad that never airs in which Gurwitch has to play a marauding villager from the Middle Ages, running in terror from a giant troll. “I was born to crone,” she finds herself writing in the subject line of an email to the casting director, “adding three exclamation points to demonstrate my unbridled enthusiasm.” The shooting experience is grim but ecstatic, a night of sororal bonding in forty-degree weather on a set which definitely wouldn’t pass a health and safety inspection. Not that she’d ask for much more, as she’s quick to point out; merely the same opportunities as “men of a certain age”:

These craggy gentlemen play anonymous communicators of exposition, relaying forgettable lines of dialogues like Sir, you’re needed in the war room, or sit stony-faced through tension-filled scenes portraying senior members of the armed forces. With the ban on women serving in armed combat now lifted, an unintended positive consequence will be that future generations of actresses should see more unremarkable but remunerative employment opportunities. Perhaps the real sign that women have found equal footing in the world will be when we get to see a collection of scowling female Army generals leaning in around a conference table in Iron Man 7.

Romance is just as disappointing. In one chapter, Gurwitch trails a professional “Love Coach” for a piece she’s writing for a women’s magazine. How much is embellished scarcely matters when the detail is so funny, like the Love Coach’s scent, “Vulvacious”, “a Proustian combination of bubble gum and vagina”, or the recent strange accumulation of Nazi history books on her husband’s bedside table. Gurwitch has written about her marriage before, of course, in the fabulously named You Say Tomato, I Say Shut Up, which she co-authored with her husband, Jeff Kahn. Here, her treatment of matrimony reaches new levels of excoriation. Of her sex life, she notes, “If you were to catch a glimpse of my face during the throes of passion, you might mistake my expression for that of a bartender at four a.m., shaking her last martini — one who enjoys her work and wants to please every customer, but is also relieved her shift is ending soon.”

Not that she lacks passion. Her phantasmatic fling with one of the local Apple Store Geniuses, AuDum, is one of the early highlights of the book. “He tells me to take everything off,” she writes, referring (of course) to the applications on her laptop’s desktop. “His hands glide confidently over my keyboard, but my laptop keeps stalling so I have to keep reentering my password…”

He’s typing in codes and waxing on about which cities have the best infrastructure and I am fantasizing about his possible Wikipedia entry: After AuDum Genius met Annabelle Gurwitch [we have the same initials — we can share monogrammed luggage and towels], he began his innovative and transformative design work. But I know that’s a stretch. I don’t have the money to become his patron. I would love to be his Peggy Guggenheim; alas, the best I can aim for is to be his Mrs. Robinson.

It’s not all cheerful cynicism. The death of her friend Robin and the recurrence of her mother’s breast cancer are told with the very darkest of humors. “We should really confuse things,” says one of Gurwitch’s friends as, on the last night of Robin’s life, five of them take (legally murky) turns at increasing her pain medication — “let’s put the dog’s paw on the pump!” After it’s all over, and she sits down with Jeff to open a couple of Robin’s beloved vintages, she discovers a turned Benton-Lane and a Russian River Pinot Noir with cork rot. “Thank God she never knew,” Gurwitch writes. “It would have killed her.” Laughter, it seems, may not be a panacea, but it remains surely better than not.

Read: A sample from I See You Made An Effort

← Prev: Did Dark Matter Kill the Dinosaurs? Next: The Emperor of Water Clocks →