The Emperor of Water Clocks 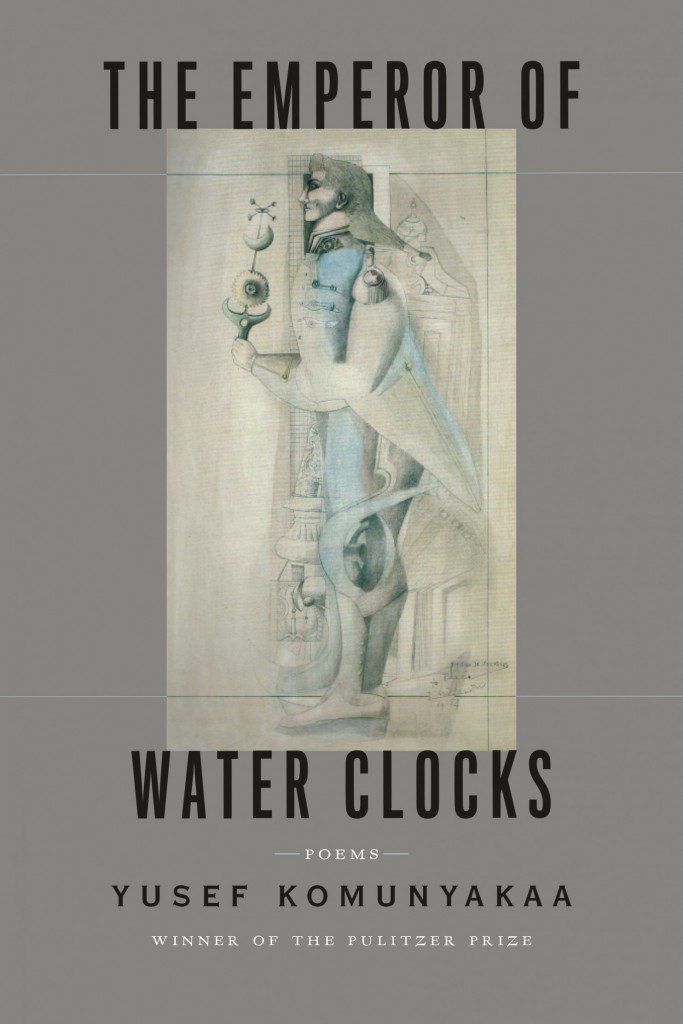 Yusef Komunyakaa’s poems are governed by a deeply anthropological sensibility. This allows the slips of time and geography that occur in his latest majestic collection, The Emperor of Water Clocks, to reveal how human rituals and behavior repeat themselves across time and space. In “The Gold Pistol”, the language of folk tales, legends and myths evokes a sort of timeless evil: “There’s always someone who loves gold / bullion, boudoirs, & bathtubs, always / some dictator hiding in a concrete culvert / crying, Please don’t shoot, a high priest / who mastered false acts & blazonry”. In these opening lines, one’s thoughts might flit to Hitler or Saddam (“in a concrete culvert”). But Komunyakaa’s subject is another, more recent dictator: “& this is why my heart almost breaks / when a man dances with Gaddafi’s pistol / raised over his head, knowing the sun / runs to whatever shines”. What causes the poet’s heart to break is the historical inevitability (“the sun runs to whatever shines”). The military intervention in Libya, like those in Afghanistan and Iraq, may have prompted brief celebrations in some quarters, but the aftermath has proved cruel. Indeed, all the foreign-policy errors made by western governments in recent years start, if you zoom out, to look predictable, like perhaps even the natural consequence of a sort of pathology — Freudian in their repetition. The clocks that tick through the poems in this book start to reveal themselves for what they are: cogs in a larger metaphor, as we tread the same ground again and again.

The poet’s despair is recognized and mocked by the raven we see in the final line of the poem, “laughing on an iron gatepost”. As in “The Raven Master”, when the poet discovers “if I say / a few holy tropes of Beowulf / they listen, as if understanding / each ragged dactyl”, the bird is uncanny, a sinister familiar for Komunyakaa’s persona. Like him, the raven seems to see human history as a series of overlapping cycles; it therefore doesn’t recognize the claims to power made by people because they are futile, doomed. That’s why the emperor in “The Raven Master” finds himself rejected by his feathered friends: “They only praise a hunk of raw meat / on a pointed sappy green stick”. That’s why Napoleon, in “The Relic”, is reduced to his penis; and Mussolini, in “Il Duce’s Villa”, to one of “two ghosts hanging upside down”. 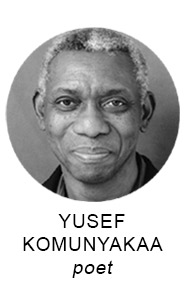 In much of The Emperor of Water Clocks, the line between the past and the present is effaced through Komunyakaa’s masterful use of language. Some of the poems do indeed seem to be set in a mythical past, like “Omens”, in which “the court’s chief jester” finds himself in peril after catching sight of “the ravishing empress naked / in a forbidden pose”. This is a world of prophecies and fools, kingdoms and tyrannies. In “The Emperor”, the title character orders his brother to act as his double, tasting his food and braving dangerous situations on his behalf. The eponymous fool in another poem tries to convince his emperor not “to behead / your own nightmares” as he waxes paranoid. Other poems, though, seem to slip in and out of time. “The King’s Salt” begins thus: “The miners dressed in monkish garb / led horses deep into briny catacombs / hewn by ancient rain”; yet there are references later to “shadows of German warplanes”. It’s as if the cycles Komunyakaa perceives in human history are like the wheels of one of his water clocks: events, language and details of milieux might all be displaced and recycled as time passes.

His technique is perfectly realized in “Scrimmage”, in which martial and imperial metaphors are put to service describing a game of football. The mythical and our lived experience are shown to coexist in this dense, terrific poem. It begins with a sort of long- to close-shot montage:

Such is Komunyakaa’s compactness of expression that it might look on the page as if six lines have been condensed into five. His words are made to do double duty — “slanting” referring perhaps both to the trees and the “snow & ice”; the evocative but elusive “blue hour”; the syntactical difficulty of that third sentence. This density we might read retrospectively as emblematic of the line of scrimmage we see next: coiled, tense.

We’ve had eagle and pigskin already — now steaks, wishbone, billy goats. Carnality reigns! Meanwhile, the “proxy platoons” that “hunker under helmets” recall Komunyakaa’s Vietnam poems, and look forward to the magnificent “Torsion” a few pages after this poem, with its damning refrain, “What’s the spirit of the bayonet, soldier?”

The return of every nagging in the head
sits at the base of the spine wound tight
as a mainspring of bone & gut, the hum
of silent centuries till the ball is snapped.

Again, a lot going on. There’s the “nagging” that refers both to game-day anxiety and, punningly, back to the poem’s animal theme. There’s “the base of the spine wound tight / as a mainspring of bone & gut”, which, because of the primary and primal importance of the spine in human evolution, seems to me to stand for the source code that’s continually compelled humans, down the centuries, to make war or play sports. And then there’s “the hum / of silent centuries”, the dramatic pause before the snap of the ball in which we’re encouraged, perhaps, to discern that passage from war to sport, the sublimation of one into the other, over time. The poem ends with another of Komunyakaa’s clocks:

The peacocks spread their tail feathers
on the sidelines of the sweaty gridiron,
hurrahing each touchdown & field goal
in the percussive air, running in place
every second left on a brutal clock.

Football’s a dramatic game, sure, but in the context of the rest of this lyrical, tremendously powerful collection, this “brutal clock” has a much more threatening, world-historical terror to it.