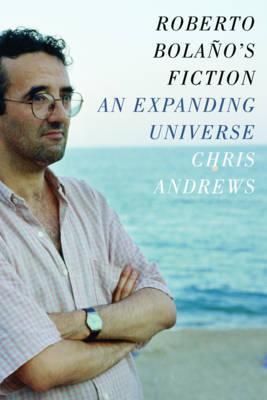 The first English translation of one of Roberto Bolaño’s novels was published in 2003, the same year he died, at the age of fifty, of liver failure. Susan Sontag was his anglophone herald, referring to him, in her notes on By Night in Chile, as “the most influential and admired novelist of his generation in the Spanish-speaking world.” Farrar, Straus and Giroux published The Savage Detectives in a translation by Natasha Wimmer in 2007; it sold 22,000 copies in its first year. 2666, a colossal work unfinished at Bolaño’s death, followed in 2008. As Chris Andrews reports in his new book, “Within days of publication, Farrar, Straus rushed out a second printing, bringing the total to more than 75,000 copies.” These are exceptional figures in the realm of translated fiction, not least as only two or three percent of books published in the US each year began life in other languages. Why Bolaño?

Roberto Bolaño’s Fiction: An Expanding Universe (Columbia University Press, 2014) is the work of a person who can perhaps answer that question with greater authority than most. Andrews has translated six novels and four short-story collections by Bolaño, and his close readings of the work are the bedrock of this fascinating study. He tackles the tricky question of reception — why has Bolaño become so popular? — as well as providing a convincing poetics for the work as a whole, which, considering the complex interrelations between Bolaño’s fictions from The Savage Detectives onward, will surely become indispensable to students of it.

Bolaño’s own life provides a way in. Pick your myth: the impoverished writer; the political prisoner (following the 1973 coup in Chile); the heroin addict (not true); the iconoclastic poet; the stratospheric rise (with The Savage Detectives); the prodigious late output; the early death. This would not be enough, though, to sustain the level of critical interest with which his work has been met — and in translation, too. Andrews suggests that Bolaño works well in translation because it doesn’t rely too heavily on wordplay or “subtle sound patterning.” Unlike, say, Flaubert, the majority of his style is reasonably replicable in English. This is a liberation (and a relief) for non-Hispanophone readers who want in on the action, because there is very much to discuss.

As the title of Andrews’s book might suggest, Bolaño’s style is characterised to a large degree by “expansion”:

His prose has a contagious, joyful energy, even when treating desolate themes. This energy springs in part from a literally expansive quality: it moves forward by expanding and opening up what has already been written, from the scale of the sentence up to that of the book.

This is meant literally: over and over, Bolaño reworks characters and scenarios he’s already written. The final chapter of Nazi Literature in the Americas, for instance, is reshaped and expanded in Distant Star. These expansions are often destabilising or digressive. He encourages, Andrews suggests, apophenia in his readers: a tendency to over-interpret, jump to conclusions, join too many dots. Doubtless this is partly why critical interest has been so keen — Bolaño’s is an extraordinarily fertile corpus. The recurrence of many of his characters, sometimes with different names, sometimes near-unrecognisable, also serves to “create intriguing puzzles” for the reader. His work is a crime scene awaiting investigation. 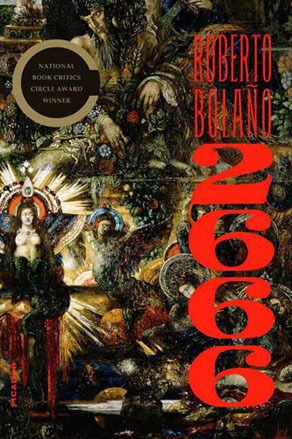 This is an apt metaphor, for crime is one of Bolaño’s great subjects. Indeed, “The Part About the Crimes” in 2666, an inventory of the violent deaths of over a hundred women in and around the fictional city of Santa Teresa, is perhaps the most famous fragment of his work. “No one pays attention to these killings,” says Klaus Haas, the principal suspect, “but the secret of the world is hidden in them.” This ominous pronouncement is surely an invitation to apophenia, just as 2666‘s vastness encourages multiple readings, interdisciplinary study, semiotic fireworks. It’s a book in which one might expect to find the secret of the world; a work sui generis; a novel containing writhing multitudes. As Jonathan Lethem put it in the New York Times Book Review, “the composite result, though unmistakable, remains ominously implicit, conveying a power unattainable by more direct strategies.”

Part of this is due to its Chinese-box structure. In the opening pages, 2666 is the story of four critics searching for the great writer Benno von Archimboldi. The murders that will take up such a huge portion of the book later on are alluded to, but seem immaterial. Part II opens on a different set of characters; Part III likewise. Narrative tension is, in Andrews’s phrase, “decentralized or devolved,” and it is not till seven hundred pages after the end of Part I that the possibility of the writer and the critics meeting reemerges. The story moves about in time, characters come and go, the relationship between the crimes in Part IV and the rest of the action occasionally seems merely thematic. Bolaño’s fictional universe expands; his text metastasizes with it. Proliferating incidental narratives and minor characters circle like vultures around the horrors of Santa Teresa. The conventions of fiction conspire to color events that may bear little or no causal relation to any other. Bolaño’s assertion that there is a “hidden center” (“centro oculto“) at the heart of 2666 will only provide further motivation for his readers to keep the casebook open. To answer every question, Andrews says, “would be to shut down a motor of writerly invention and dry up a source of readerly curiosity.” He needn’t worry — asking every question seems a daunting enough mission.

Roberto Bolaño’s Fiction benefits hugely from Andrews’s intimate familiarity with the work. In other chapters, he provides a sketch of what he deems to be Bolaño’s “minimalist” belief in literature; his attitude towards identity construction (diachronic vs. episodic); and an anatomy of the evil present in his fiction. He also considers the relationship between Bolaño and Jorge Luis Borges, one of the few writers he seems to have revered. It’s a relatively slim volume — a couple of hundred pages — and there are no fully developed readings of individual works. But the lines Andrews draws between texts are highly illuminating, and this book will light the way for many scholars to come. Bolaño studies, as it develops, will likely be a discipline that disdains hermetic readings. The way his books speak to each other will demand of his critics a frame of intertextual reference that the casual reader will not be equal to. As this study reveals, though, in such difficulties lie vast reservoirs of pleasure.

You can buy Chris Andrews’s book and many titles by Roberto Bolaño at McNally Jackson.

← Prev: Inside the Lie Next: Review: The Children Act by Ian McEwan →