We’ll be posting videos from the show soon, but here’s a sneak preview of what went down when the curtain went up… 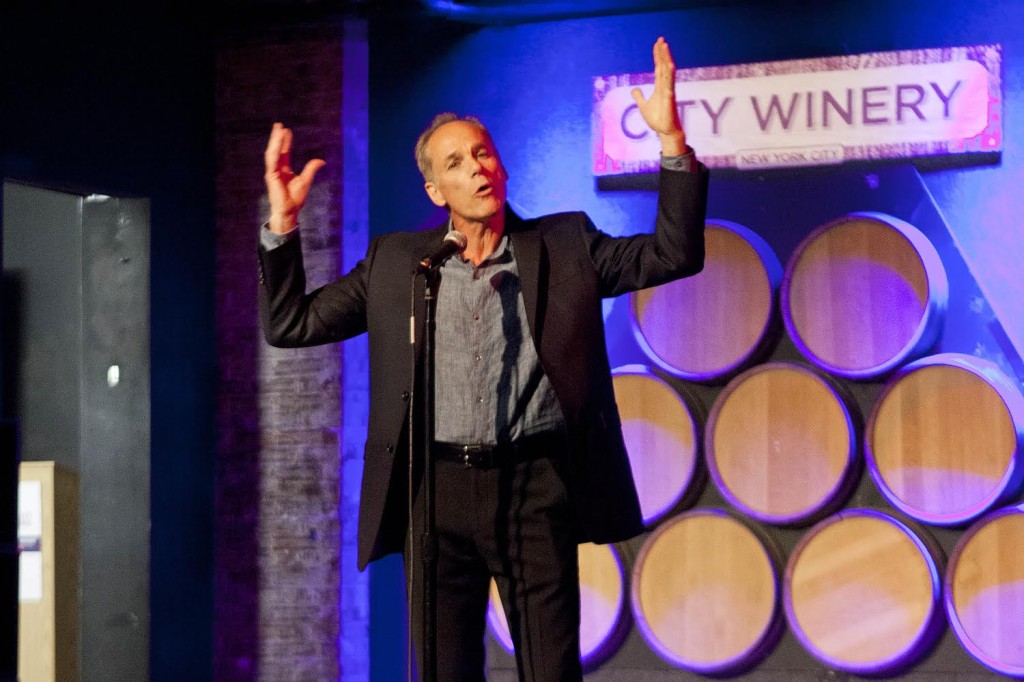 Marcelo Gleiser: “We matter because we are very rare…”

Marcelo Gleiser set the scene in 1543 with the death of Copernicus. The Prussian math genius supposedly died with his newly published masterwork, De revolutionibus orbium coelestium, in his hands, horrified by the preface tacked on by Lutheran nay-sayer Andreas Osiander that essentially discredited all that followed. Copernicus’s theory — maybe the sun… doesn’t orbit the earth? — would of course turn the world upside down (pun). But reversing the cosmic order, especially one which sustains the reigning orthodoxy, takes, in Marcelo’s words, “a lot of guts.” Copernicus, thankfully, would have the last laugh.

Many of the things we take for granted today depend upon the advances made by quantum physicists, working in the realm of the indescribably small. “Science is about opening windows into this invisible reality,” said Marcelo, windows which — he contends — go on opening indefinitely. “There is no final, firm scientific knowledge. Just evolving ideas.” If this sounds defeatist, though, it’s not. Embracing the Copernican Principle and all the scientific progress made off the back of it, we see in fact that “Earth is very special.” We may have one moon while Jupiter’s got sixty-plus, but the mass and relative position of ours is what enables the seasons to change. There may be two hundred billion other stars in the Milky Way, which is “really humbling,” but if intelligent life exists anywhere out there, it would have to be so remote from what we know that we are, effectively, alone. “We matter because we are very rare. We are the way the universe thinks about itself… That is liberating. It will keep us curious!” 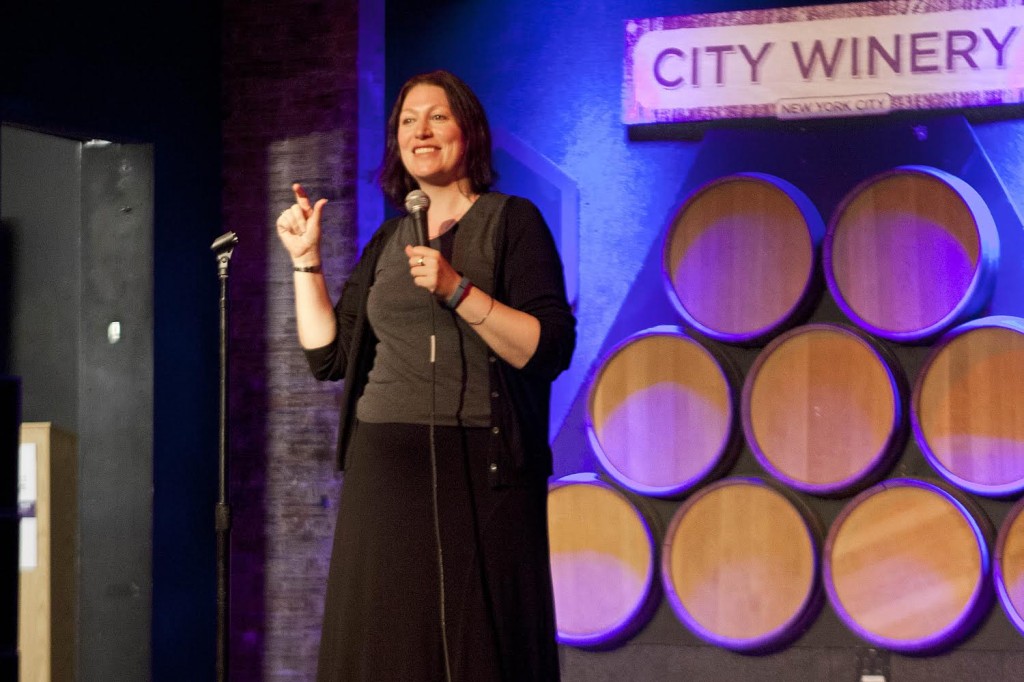 Natalie Haynes: “Batman & Robin — a film so bad I fainted at the end of it.”

“New York is the only city I ever performed in as a stand-up comedian where everyone speaks at the same speed as me,” began Natalie Haynes at the start of a light-speed set encompassing Aristotle and Angel Heart, Oedipus and Arnie. “Since the theme for tonight is ‘Inside the Lie,’ I thought I would talk about the greatest lie in Greek theater…”

Natalie recapped the plot of Oedipus the King at Nascar speed, right down to Jocasta’s suicide and the terrible revelation of the king’s provenance. “Come on, you’ve had two and a half thousand years to read it!”

As she pointed out, Sophocles’ masterpiece set the template for the modern whodunnit. It is, in Aristotelian terms, “the most perfect Greek tragedy,” an exemplary synthesis of — in order of importance — plot, character, reasoning, dialogue, music, and spectacle. Not how Hollywood works today, Natalie observed, with reference to Joel Schumacher’s 1997 anti-classic, Batman & Robin, “a film so bad I fainted at the end of it.” The costume for Mr. Freeze (Arnold Schwarzenegger) in said movie cost the production $1 million. “Could you have spent five, maybe seven cents of that on the script…?” 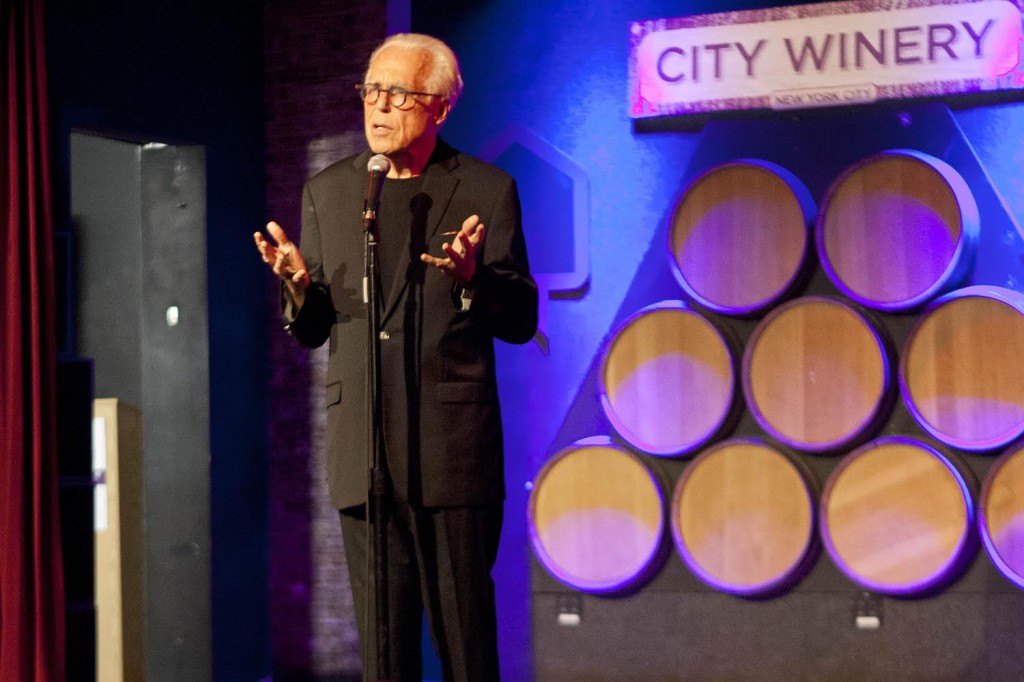 John Guare: “I went into the bathroom and saw, hanging on a doorknob, Sophia Loren’s panties…”

Prompted by a James Taylor concert on PBS, legendary playwright John Guare took us back to February 10, 1971, “the day my life changed.” Following a film screening, Guare was accosted in the subway by a blonde woman and two short Italian men, one of whom turned out to be film producer Carlo Ponti, perhaps better known as the husband of Sophia Loren. Ponti had been prepping an Elliott Gould movie only for Gould to suffer a breakdown, leaving the production leading-man-free. Guare, whose elegant height is a decent match for Gould’s 6’3″, agreed to screen-test for the incongruous trio. The next day, he was offered a three-picture deal.

“My lawyer called and said, ‘Carlo wants you to go to the Essex House right now to meet Sophia Loren!'” And there she was. “I read she’d had the inner edges of her eyes tattooed so she’d never have to apply eyeliner again. I wanted to get close to check…”

Things got surreal. Needing a break, Guare slid into the bathroom, where he saw, “hanging on a doorknob… Sophia Loren’s panties.” As if to affirm both the reality and the absurdity of the situation: “I took them… and I put them on my head.”

Ponti made some amazing promises, including transforming Guare’s Broadway show The House of Blue Leaves into a movie. But Guare had had second thoughts.

One morning: “I woke up and turned on the radio, and heard James Taylor… It was ‘You’ve Got A Friend.’ ‘They’ll take your soul if you let them…'”

“At 7am, I called the Essex House and said I couldn’t do the movie. I was living inside this lie of success. Carlo said, ‘You’ll never act again,’ and I said, ‘Fine!'”

The special guest host for SpeakEasy’s literary quiz, Tip of My Tongue, was jewelry designer and sometime Wes Anderson co-star Waris Ahluwalia, who tantalised the crowd with the six Ferraris up for grabs outside City Winery for the winners (inside the lie indeed…) This month’s mystery passages came from Orwell’s Nineteen Eighty-Four, Dorothy Parker’s “Unfortunate Coincidence,” and Hamlet. 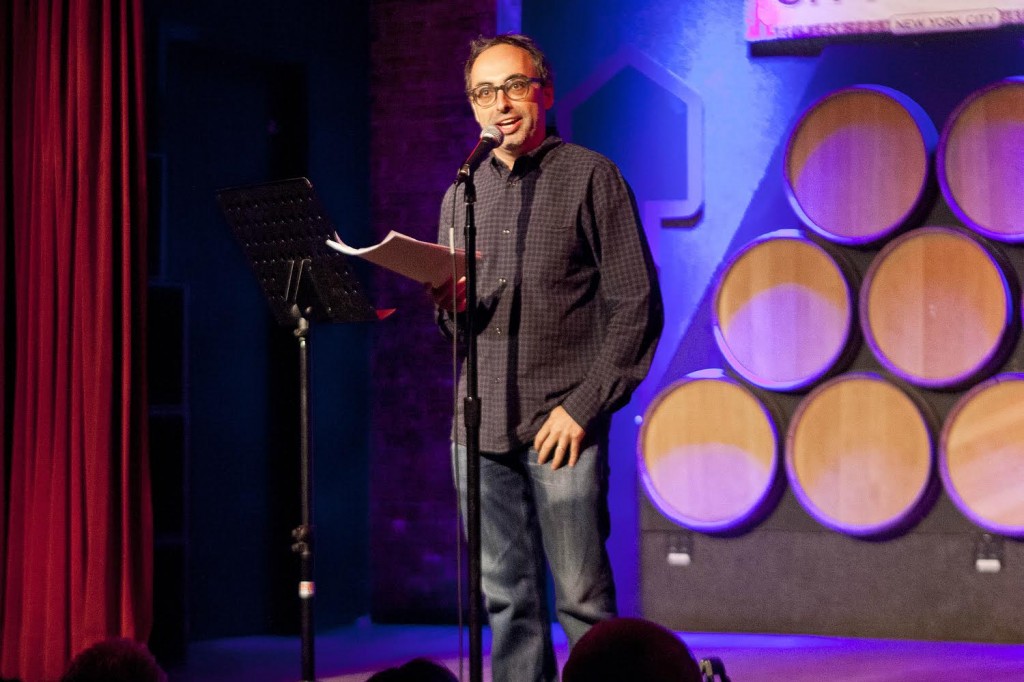 Gary Shteyngart: “My whole life has been just one lie.”

Little Failure, which comes out in paperback from Random House on October 7, is Gary Shteyngart‘s hilarious new memoir. In it, he recounts his experience of “being a liar, by which I mean being a writer…”

“My real name is Igor Shteynhorn — I was a Bavarian porn star before.” So begins the story of a little Soviet boy in Leningrad (no longer its name, of course) who comes to America loving Lenin, learns to revere Ronnie, and dreams of a day when he no longer has to attend the Solomon Schechter School of Queens (“I wanna live in Miami! Maybe there won’t be Hebrew school in Miami!”) Growing up in Queens in the 1980s as a Russian emigré necessitated a certain degree of deception, and young Gary, tormented by Reagan’s “evil empire” speech, pretends he was born in East Berlin. “You know things are bad when you have to convince Jewish kids you’re a German!”

But he found huge pleasure in writing. Admitting to a favorite teacher that he has written a novel — entitled The Chalenge [sic] — he is persuaded to share it with the class. It is well received, and eventually every class will be punctuated by hoots of “When will Gary read already?”

“God bless these kids for giving me a chance,” he concluded. “May their God bless them, every one.” 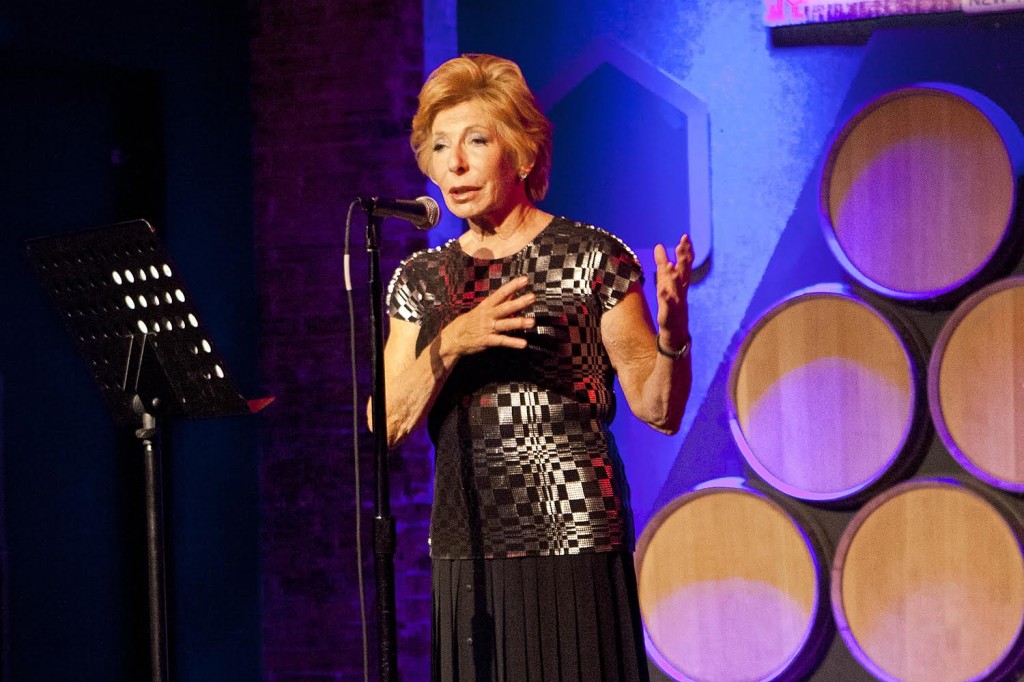 Gail Sheehy: “It’s the job of the journalist to expose the truth or the lie.”

In the early days of her romance with New York magazine co-founder Clay Felker, Gail Sheehy was commissioned to follow Bobby Kennedy’s 1968 presidential primary campaign as he battled Senator Eugene McCarthy. “You have to grab something that everybody’s talking about but they don’t know why,” said Felker, and off flew Sheehy on RFK’s trail.

“Would you like to sit up here, New York?” said the handsome senator. Sheehy, astonished, wordless, joined him. Kennedy reached for his brother’s overcoat, which he continued to wear even five years after the assassination. “We talk about that,” Sheehy told us, “and how he faces fear and death.”

During the flight, a sudden emergency: a second plane on the horizon, seemingly headed straight for them. “We dropped. And in the middle of the drop, RFK says, ‘I knew Gene McCarthy was desperate but I didn’t know he was that desperate!'”

Sheehy concluded with the revealing, somewhat risqué story of how Margaret Thatcher, then prime minister of Great Britain and Northern Ireland, managed to look fabulous even ten years into her premiership. “I’ve done a lot of things to get a story,” she said, “but I draw the line at electrocution!” 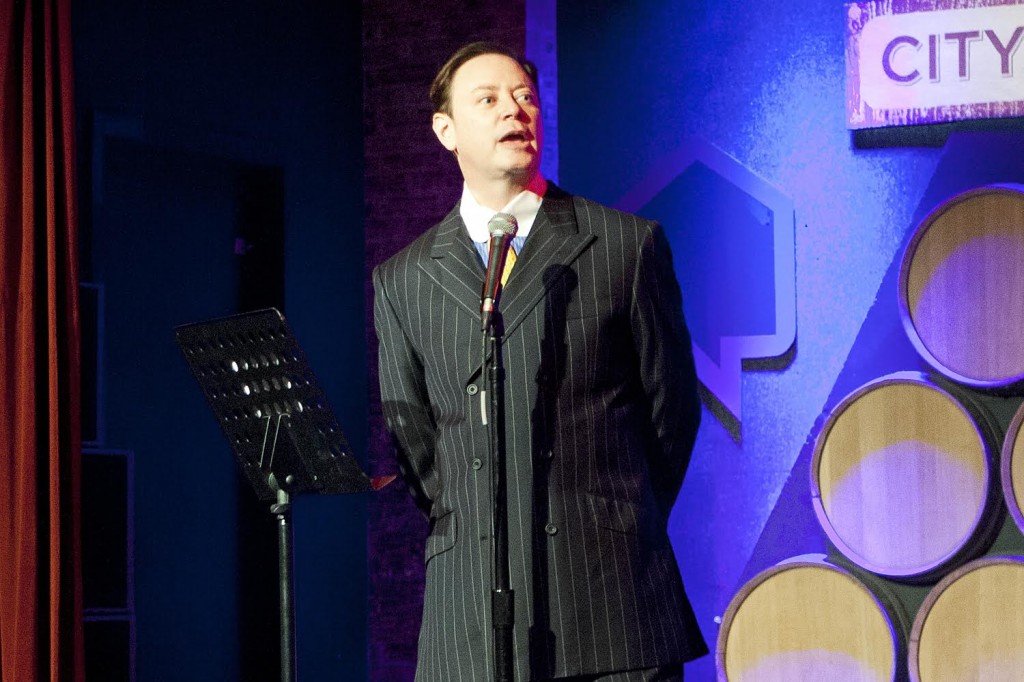 Andrew Solomon: “An interview about depression may not sound like the beginning of a love story, but it was.”

To round off the evening, the SpeakEasy crowd welcomed Andrew Solomon to the stage. Recalling his childhood, Solomon alighted on a gay couple his parents had befriended, Elmer and Willie, who often spent Christmas with the Solomons. Elmer had been studying medicine at Yale before he was drafted during the Second World War, and Solomon was brought up believing that he gave up becoming a doctor because of what he’d seen in battle. “I didn’t know I was inside a lie when I heard that story.” But as Willie later told him, “No one was going to a gay doctor then.”

“Not a great message for me to grow up with,” Solomon commented. His own sexual journey bypassed sexual surrogacy therapy in Hell’s Kitchen (“these women were not exactly prostitutes but they weren’t exactly anything else”) and a series of relationships with both men and women. Finally, he met John, now his husband, on the media tour for his book on depression, The Noonday Demon. Together, they mulled over having children. And after both had become sperm donors for other couples — one lesbian, one straight — they set out to do just that.

The truth is complicated. As Solomon remarked, searching for egg donors on the internet is “like ordering a car online that you’re gonna have to drive for the rest of your life.” And parties can get confusing — as one guest remarked after a dinner Andrew and John had hosted, “There must be a word for this kind of consanguinity, but I very much enjoyed talking to the daughter of the partner of the mother of your daughter.” But diversity is necessary “to sustain the ecosphere of kindness,” and truth in this case — and many others — is certainly preferable to the lies that destroyed so many Willies and Elmers.

You can buy books by all our writers at McNally Jackson. Follow us on Twitter for updates on our next show, No Satisfaction, at City Winery on November 17.