The Children Act (Nan A. Talese, 2014) is a short novel, and this is, says writer Ian McEwan, a good thing:

If we can make this fine distinction, it’s a short novel rather than a novella. But I do love this form. The idea of sitting down to a book that you could read in one sitting, or within three hours, much as you might go to a movie or an opera or a long play… You’ve got to establish characters very quickly, there’s room for one or two sub-plots. It’s a form I adore.

At two hundred and twenty-one generously spaced pages, his thirteenth novel certainly fits the bill. But what The Children Act lacks in word count, it makes up for in the efficiency of its style and execution. 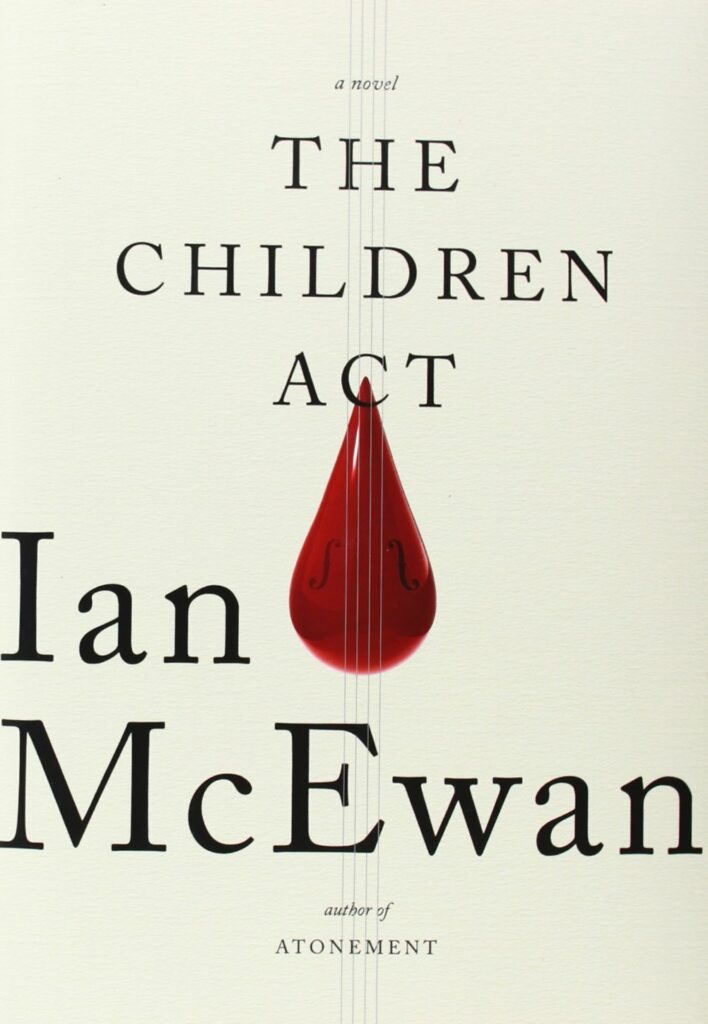 McEwan’s protagonists have always known too little and too much. The precocious Briony Tallis, in Atonement, second-guesses rape where there’s none. Saturday‘s Henry Perowne is doubly fated by his understanding of his assailant’s Huntington’s disease. The plot of Enduring Love hangs on misunderstanding and uncertainty. In each of these books, as in The Children Act, what concerns McEwan is a kind of epistemology of “the instant.” Moments of extraordinary stress or violence give rise to events that dissolve the systems of control that his characters have constructed. The tragedy of Atonement is a product of Briony’s inability to regain control of a situation she created. In Enduring Love, Joe and Clarissa’s relationship breaks down under the strain of Jed’s unwanted attentions. Henry’s smart-aleckry sets the scene for an awful home invasion that fateful Saturday. In each case, the loss of control has exponentially disastrous consequences; further violence is usually inevitable. That McEwan’s protagonists are usually upper-middle class (neurosurgeons, composers, politicians, the inhabitants of a country house) and ultra-rational might lead some to identify an embattled sort of privilege as a major theme in his fiction. His well-to-do characters are the victims of violent criminals, the mentally ill, the Second World War: there is still so much to fear in their ivory towers. A more nuanced reading, perhaps, might hold that his manicured prose and the Mercedes lifestyles of his characters are just a calm surface over troubled water. Is there an implicit critique of their values in McEwan’s absurd lurches of plot, in the incursions of what we might call the Real on their merry order?

The Children Act appears like a late sonata, a summary of familiar concerns elegantly wrought. Fiona Maye, a High Court judge, presides over familial disputes, specializing in the welfare of children. As the novel opens, her thirty-year marriage is in peril: her husband, Jack, is seeking her permission for an affair. Their rift — and temporary separation — provides the emotional backdrop for the novel. We are led to question whether Fiona’s judgment is operating optimally during this time, a period when she takes on an extraordinary case in which religious and medical opinion are pitched against each other. The seventeen-year-old boy at its center, Adam Henry, stands an excellent chance of surviving the leukaemia that afflicts him if he will undergo a blood transfusion. But he and his parents are Jehovah’s Witnesses and consider transfusion an intolerable pollution. Fiona, in an unorthodox move, visits Adam in hospital to assess for herself his capacity for making an informed, adult judgment. Here’s McEwan with his own introduction to the book:

McEwan’s prose, ever-clinical, reaches new heights of compression here. Sentences accrue, clause by clause, with minimal ambiguity. Some pass by without verbs. If a latinate polysyllable fits, it’s in. The narrative register mirrors, perhaps, the order, care, and clean edges of a fine legal mind. Fiona, we learn, is extremely uncomfortable when she is unable to bring about such order. Mid-row with Jack: “She felt helpless and wanted the conversation to end. There was a judgment to approve before tomorrow for publication in the Family Law Reports.” Her career is her crutch; law is where she feels safe. There’s a strong implication that the childlessness that periodically bothers her is a direct consequence of a life focused on her career. Consequently, it bears the weight of all she feels she lacks.

What one might assume is the central ethical question of the book — over the right of a hospital to operate beyond the strongly held wishes of a patient — is supplanted by another, less tangible one. What bearing does Fiona’s behavior toward Adam have on the novel’s outcome? To what extent is her judgment, a quality she has professionally cultivated, awry? She sees him only twice, but the consequences of both meetings are far-reaching. The unmeasurable currents that pass between them and their strange points of contact are enough to unleash the sort of chaos we have come to expect from such McEwanish moments.

The book’s simplicity and brevity are, inevitably, deceptive. Whether or not you can take seriously McEwan’s characteristic machinations of plot, the implications for Fiona Maye are clear. Uninsulated from the effects of her judgments, she discovers that life teems with the sort of ambiguity the law cannot tolerate. The Children Act‘s lean construction ensures that each carefully chosen detail illuminates the central problem. Music and poetry, shibboleths of Fiona’s privileged existence, prove as vulnerable to misinterpretation and the ravages of chaos as the law does. Questions of welfare and well-being, central to the 1989 Children Act and recurrent in the book, are extremely complex in the context of her own marriage.

Certainly, for a short novel, there’s a lot going on.

You can buy The Children Act and other books by Ian McEwan at McNally Jackson.

← Prev: Roberto Bolaño's Expanding Universe Next: A Year in Tehran →