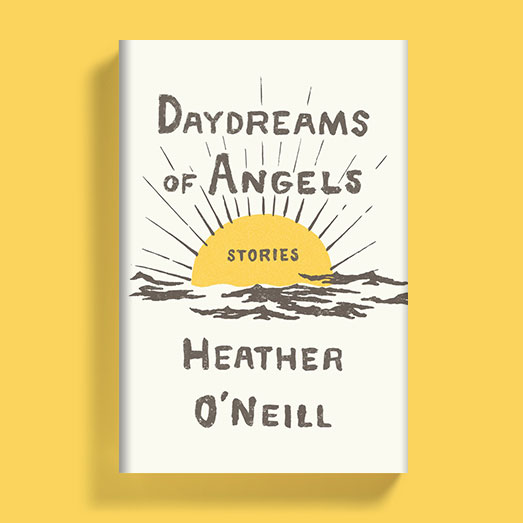 A girl and a boy sit in a kitchen listening to their grandfather’s absurd stories of Christmas past, when potatoes had eyes and lions could speak. “It was harder to tell the difference between when you were asleep and when you were awake. Children would sit and slap each other in the face, trying to wake one another out of a dream when things weren’t going right.” In Heather O’Neill‘s strange and fabulous new collection, Daydreams of Angels, we too find ourselves in the liminal territory between dream and reality (whatever that may be). Hers is an imaginary world where tigers and wolves prowl the streets, where a soldier shot fifteen times can be revived by a toymaker and a child playing Bartók, where ascetic twins shipwrecked on a cello case can become international causes célèbres. Beautiful, witty and deeply Freudian (there’s even a Québécois wolf-boy), these stories are truly fairytales for adults.

O’Neill lays out her cards right from the start. In “The Gypsy and the Bear“, the characters in a child’s fantasy are abandoned mid-story when the boy is called to lunch. In the midst of life, they find themselves, like Dante, lost. “The Gypsy stood there, contemplating his existence. He wasn’t even a real Gypsy, not a member of the great Romany people, but more like the fictional kind, like the ones that you see in old-fashioned storybooks.” Freed from the child’s one-dimensional rendition, the Gypsy and his performing bear travel to a nearby city, astound its inhabitants with their music, visit a brothel, bicker. The world they move through is shaped by the boy-creator’s imagination — the brothel owner’s “unbelievably enormous cleavage” is credited to his “vivacious grandmother” — but transfigured by the sort of material that is often left latent in fairytales (child abuse, perverse sex, a sort of bleak existentialism). The tale ends with the metamorphosis-epiphany typical of many short stories and fairytales, but unveiled with uncommon grace and uncanny wisdom. The boundaries between the Gypsy and the orphan-prostitute he sleeps with start to blur; she disappears; he begins to see the bear as “really his own great big heart… who he would have been if he hadn’t had a difficult childhood”. The Gypsy’s renewed understanding of the world, which leaves ambiguous for the reader what is “real” and what merely imagined, fills him with wonder. This heady mix of manifest and latent content, the interpenetration of inside and out, sets the tone for all that will come after. 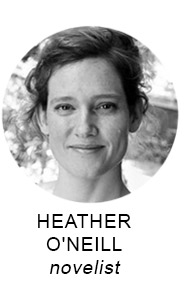 Extraordinary variety may be found therein. In “Swan Lake For Beginners”, Soviet apparatchiks clone Rudolf Nureyev in the vain hope of filling theaters round the world with perfect dancers. A young woman sleeps with German soldiers for gloves and pastries in “The Story of a Rosebush” while a drug addict inspires a lonely young boy to take up a political career in “The Man Without a Heart”. In “The Dreamlife of Toasters”, a malfunctioning android gives birth to a tiny robot but discards him out of fear.

On a page-by-page basis, the pleasure lies in O’Neill’s proliferating imagination and gift for simile. “Messages In Bottles” — the one with the ascetic twins, and perhaps my favorite — is exemplary. When the twins return to civilization, they are discontented with their celebrity and the adoration heaped upon them. The girl becomes depressed:

She was at a zoo when a polar bear escaped. The polar bear walked right up to her and reared up, looking like the tip of an iceberg. It took her hand in its paw and kissed it. The polar bear then proceeded to saunter off and kill three guards, and all the while her heartbeat did not quicken. She would go to the park to look at swans. The swans would remind her of the swan that had rejected her out in the middle of the ocean. Nothing matched that feeling of rejection.

When they decided to run away to sea again, “all the dogs began to moan and howl and bark. They sounded like a choir of baritones.” The animals that pass through Daydreams of Angels are like something out of a Rousseau painting, all vivid colors, sharp lines, and uncanny gazes. Like the bear in the first story, they may all be read literally as well as metaphorically. They are angst and threat and loneliness, joy and sorrow and love.

There are recurring tropes (absent or dead parents, the provenance of children, sexual desire and threat, all those wild animals) and settings (France under the Occupation, the ocean, Montreal). And then there are the details that crop up precisely twice but in separate stories: the tear-soaked cheeks fetishized by a German soldier in “The Story of a Rosebush” appear once more in “Bartók For Children”; stars doodled on a page in one story can be seen on the pages of their successor. This repurposing is performed in much the same way that dreams recycle the matter of waking life. The link between stories at times seems telepathic or psychic; an isolated moment can be a portal into a whole other world. One senses that the wallpaper that features in so many of the stories — a repetition so apparently insignificant that it registers just barely — might, when ripped off, turn out to be the only, fragile, permeable membrane that separates one story from the next. One of O’Neill’s characters describes scholars as “like therapists, but for books”, and the challenge she sets critics — and readers — might well indeed be psychoanalytic in nature. But before we rise to that challenge, we must first let these beautiful Daydreams wash over us.

← Prev: Altered States Next: Did Dark Matter Kill the Dinosaurs? →