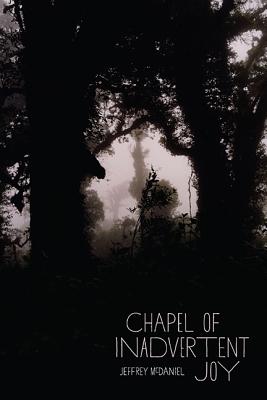 In the last twenty years Jeffrey McDaniel has published five collections of poetry: The Endarkenment, The Splinter Factory, The Forgiveness Parade, Alibi School, and his most recent, Chapel of Inadvertent Joy (University of Pittsburgh Press, 2013). This latest is a rich, fast-paced, helter-skelter set of licks on subjects including ageing, infidelity and Winona Ryder’s eyebrows (“safety pins / holding her face together”). It’s laughter in the dark at times, but there are enough moments of romance and sensuousness to prevent the whole enterprise from disappearing into a rabbithole of midnight angst.

Orange flashes through the hole where the windshield used to be.
A splatter of volcanic splotches, like drops of scorched milk,

sears into the Pompei of his cheeks.

It’s an extraordinarily intense tableau, gruesome in its similes and metaphors, almost onomatopoeic in its consonance and use of plosives. Later:

Doctors compact a chin from sashimi-thin slices of gut, twine and dye
ruby lips from forearm slivers. And voila: a face.

It’s Nightmare on Elm Street stuff, and the poem’s victim is all too aware of this, as he imagines “a gust of wind lifting / his new face away”, leaving “arteries / flailing like tassels”. “I am the barbecued man,” he pictures himself saying to a terrified public, “here to cook you alive.”

Invite the woman
who lost her husband
in the flickering hands 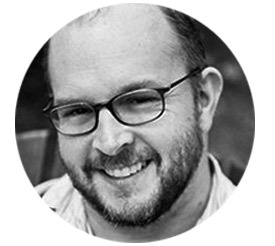 The intent this time, though, seems more satirical, or — as I first read it — purely comical. Alongside the Barbecued Man, we meet “the man / whose arm was chewed up / by a jaw of shrapnel”, “the colonel / whose son strapped himself / to the ceiling fan and took / a breezy leap of faith”, and “the father who croons / lullabies for his five-year-old / as buckshot spackles the window pane”. (There’s even a lexical echo in the unusual “spackles” of the “splatter” and “splotches” from “The Barbecued Man”.) Our suffering foursome turn out, though, to have been selfishly assembled:

Have each
prepare a few words

about suffering, but make sure
each ends by testifying
that my woes put

their woes in perspective,
that my woes are, in fact,
the measuring stick.

It’s a great, bathetic end to a pair of poems that’re at first glance weirdly coupled. It’s also a mark of the importance of play in McDaniel’s poems.

My loins
ignite like a furnace. Welcome
to my world, I think, attaching cables
under the sprung hood, revving the juice.

McDaniel’s cuckolds are knowing, sort of repulsive creatures. In the section’s first poem, “The Birds and the Bees”, the narrator describes how, during adolescence, “the noun between my legs / turn[ed] into a verb”. Opening thus, with the image of a penis transfigured into grammar (“Lust in Translation”, perhaps, to borrow the title of a later poem), McDaniel sets the scene for all manner of suggestive wordplay. Oral sex occurs in “the Jacuzzi / of your mouth”; semen is left as “crushed pearls” “drying / on your skin”. The erratically enjambed lines in “Holiday Weekend” evoke breathless coitus, while the sexual acts themselves evoke Homer:

He’s dragging his Mediterranean tongue
around the perimeter of my wife’s lullaby,
like Hector’s body around the gates of Troy.

If there was a police lineup
and your shoulder the only witness,
would it be able to select my hand
from all the other hands?

It’s a breath of fresh air amidst all the suggestive butterfly wings and “soil from another man’s / flowerbed”. More than that, though, there’s a sadness in the idea that a loved one’s hand on one’s shoulder might feel anonymous.

Ageing takes centre stage in McDaniel’s third and final act. Titles like “Youngest Brother Turning Forty”, “Kicking the Lust Bucket”, and “Middle Age” all point in roughly the same direction, at least, and there is a sense throughout of time slipping away. “I’m searching for a metaphor to connect the old and new me,” McDaniel writes, in what could be a summary phrase. Gone are the days when

you strutted Brooklyn streets with an internal boner
twanging against your spleen, imagined being a crop duster

filled with semen and pollinating all the women
passing in springtime dungarees. Now you clean

greasy spots of masculinity off the tiles, and mop
on your knees like Cinderella, with saggy boobs

and a T-shirt that says used to be one of the fellas.

The collection’s eponymous piece comes right at the end and is a final, affirmative statement. “Chapel of Inadvertent Joy” captures the transcendence of individual moments: birds in flight, “a teen punk rock show at dusk in a public park”, dropping the garden hose and having it spray you in the face. The “gold-tipped spurs” of moments like these must be savoured, he seems to be suggesting. “When they said smell the roses,” the poet points out, “they didn’t tell you that every day the rose changes, / that first you must identify the rose”. With his sharp eye and excellent ear, it’s hard to imagine that McDaniel ever struggles to do so.

Jeffrey McDaniel will appear at our next Seriously Entertaining show, Falling For Perfection, on June 23 at City Winery NYC. You can buy tickets here and a copy of Chapel of Inadvertent Joy at McNally Jackson.

← Prev: Wonder Women: Debora Spar on Feminism, Perfection, and Where To Next Next: Elliott Kalan Has To Be Funny Every Day →