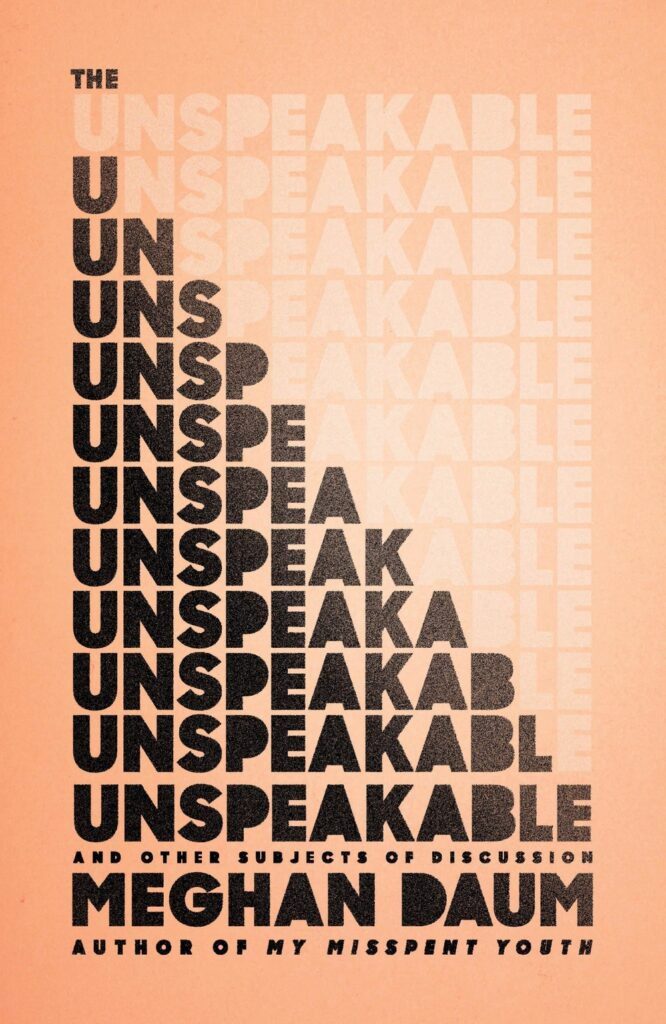 The Unspeakable and Other Subjects of Discussion
by Meghan Daum
Farrar, Straus and Giroux, 2014; 256pp

In “Matricide” Meghan Daum describes, in black-glass prose, an extraordinary cycle of horror. It begins with the death of her grandmother, continues with the passing — within a year — of her mother, almost culminates in her own demise through freak infection, and ends with a miscarriage. But this is by no means a misery diary. Rather, as she will throughout this excellent collection, Daum eschews propriety in pursuit of honesty, integrity… and black humor. This quite brilliant essay is really about a species of matrilineal distaste that many readers will surely recognize, even if few would admit it. Daum writes of the day her mother began “to self-define as a theater person” and her reaction (“allergic… on every level”) to the phoniness that followed. She tells of her mother’s spiteful outbursts at her father on hearing she has gallbladder cancer (“‘He’s happy,’ she hissed.”) And from the first sentences, she sets about destroying the clichés that surround death literature:

People who weren’t there like to say that my mother died at home surrounded by her loving family. This is technically true, though it was just my brother and me and he was looking at Facebook and I was reading a profile of Hillary Clinton in the December 2009 issue of Vogue.

The Unspeakable is an exploration of “why we so often feel guilty or even ashamed when we don’t feel the way we’re ‘supposed to feel’ about the big (and sometimes even the small) events of our lives.” Be it the death of a parent, having or not having children, getting older, even the cultivation of a discerning, adult palate, Daum attacks, systematically, the phoniness of our responses to these events. It’s a lungful of fresh air.

Having adopted a sort of anthropological interest in everything from her brush with death to her romantic life, Daum has harvested a lot of great material over the years. Her dating a series of essentially unsuitable men — the type “who paid other people to chant and beat drums while they lay on massage tables wearing flashing LED sunglasses” — was, she says, more for “the fieldwork aspect” than “to be delivered from the lonely haze of bachelorettehood into the smug embrace of coupledom.” In “Honorary Dyke,” a brief lesbian fling revealed to her “almost immediately… that I was in it less for the sex than for the sociology.” That’s not to say she’s dispassionate. It’s just more likely that she’ll get emotional over your Labrador than your toddler.

In one of my favorite chapters, Daum witnesses the weirdly tragic snubbing of Nicole Kidman at a charades party thrown by Nora Ephron. Steve Martin’s there, as are Larry David, Rob Reiner, Meg Ryan, Arianna Huffington… During one round, the answer turns out to be Days of Thunder. “‘What the hell is that?’ said Larry David. ‘Is that a movie? I never heard of it.'” Kidman, reclining at a distance from the fray, pipes up:

Actually she said, “It’s a race cah movie,” in her Australian accent.

Not everyone heard her, but those who did were still unable to place it.

“No, more like… whatever,” said Nicole, waving her hand in dismissal. She pronounced whatever as “whateever.”

Transmuting the petty shames and upsets of life (both civilian and celebrity) into a form that can enlighten and amuse is one of the gifts of the great essayist. Meghan Daum might just be one.

“Difference Maker” in The New Yorker, a version of one of the chapters featured in The Unspeakable.

“All about my mother” in the Guardian, an edited version of “Matricide.” 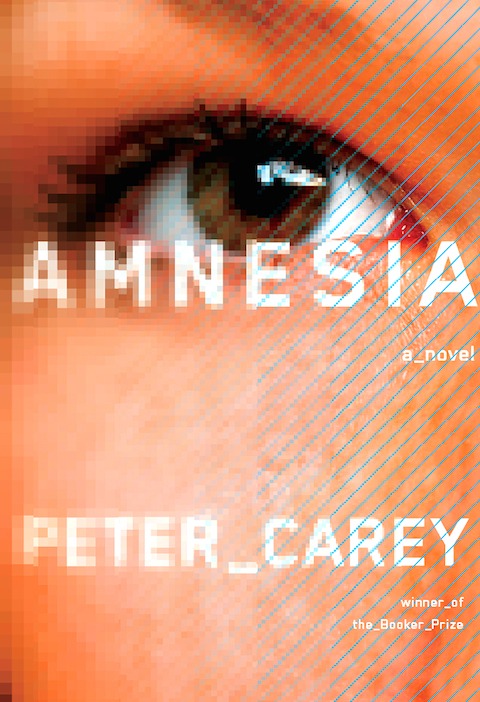 Peter Carey‘s thirteenth novel treads new ground while exploring old themes. Carey has long been interested in biography, counterfeiting, ventriloquism, Australian history. Here he brings hacking, the internet, and Big Data to the table. Inspired initially by the story of Julian Assange, Carey launches out almost immediately in a different direction. Those looking for WikiLeaks: The Novel will be disappointed. What emerges instead is a complex study of the work of memory, the Australian constitutional crisis of 1975, the perils of journalism, and the exponentially expanding dangers of the digital world.

Amnesia‘s protagonist, Felix Moore, is a journalist of the old left. At the outset he’s in disgrace, sued for libel. “In the world of grown-ups a rumour is as much a ‘fact’ as smoke,” he argues. “To omit the smoke is to fail to communicate the threat in the landscape.” His tendency to elaborate and draw connections that cannot be proved will come to shape the narrative.

Through a connection, Felix becomes embroiled in the story of “the Angel,” a hacker whose latest stunt has busted open thousands of prison facilities in Australia, the US, Afghanistan, and elsewhere. The woman alleged to be behind the hack is Gaby Baillieux, the daughter of Felix’s old university friend Celine, whose own past was the subject of one of his earliest forays into investigative journalism. (In this extended aside, Carey’s neo-Dickensian fascination with identity and provenance runs riot.)

Halfway through the novel, the perspective shifts and Felix drops into the third person. The style becomes more fragmentary, and the reader becomes aware of many narrative lacunae (“When the Mac IIx arrived she could afford to buy one and thus became ‘the oldest hacker in Melbourne.’ Fast forward. Play. She was not a criminal. Stop. Fast forward. Play.” And so on.) Testimonies are jumbled up, cut and pasted, massaged into coherence. Felix, seduced by patterns, attempts to force chaotic reality into a neat package. What amounts to little more than metadata (who met who and when) is piped into scenes whose significance is “clear to him, inarguably so,” even when it’s just as clearly ambiguous to the reader. “I admitted to an ugly excess of ambition,” Felix writes; “the desire to make the story ‘rich’ and ‘complex.'” When one considers the stakes, this ambition amounts to hubris: Gaby’s crime may leave her open to extradition to the United States, where in theory she could face the death penalty.

Carey’s plot has the momentum of farce, while the language is by turns coarse and lyrical, befitting the novel’s harsh, beautiful Australian backdrop. While it lacks the stylistic panache and warmth of True History of the Kelly Gang (for my money his masterpiece), Amnesia is still a strong entry in the ledger of books grappling with the implications the internet has for literature. It’s harder to forget than its title might suggest.

The first chapter of Amnesia can be accessed on the Wall Street Journal‘s Speakeasy site.