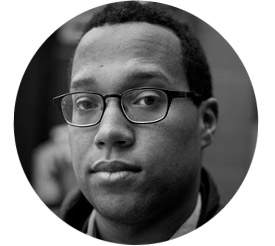 The fact that the Oxford English Dictionary‘s first citation for “mashup” is from Dion Boucicault’s play The Octoroon (1859) is highly significant in the context of Branden Jacobs-Jenkins‘ Obie Award-winning remix An Octoroon. There’s hip-hop, mixed media, a jarring blend of idioms, even a mischievous Br’er Rabbit figure wandering about in scene changes. Now enjoying its final week at Theatre for a New Audience in Brooklyn, An Octoroon is an assault on polite taste, a thrillingly audacious work of theater, and a very funny, postmodern take on a text that in any case cannot be played straight in the twenty-first century. Boucicault’s play, as reimagined by Jacobs-Jenkins, is a total mashup. It’s also an eloquent dissertation on the difficulties of talking meaningfully about race in the United States.

A man enters at the start of the play dressed only in white underwear. “Hi everyone,” he says, “I’m a black playwright.” What follows explodes this apparently simple statement. This is BJJ (Austin Smith), a sort of avatar for the playwright, standing in relation to the real Jacobs-Jenkins like Woody Allen’s characters do to Woody. “I can’t even wipe my ass,” he complains, “without being accused of trying to deconstruct the race issue in this country.” His calm but clueless therapist is in laughably reductive counterpoint: “Do you think that maybe you’re angry at white people?” The audience scoffs. Not that there’s not much to be angry about — An Octoroon concerns slavery. But BJJ’s anger is directed much more forcefully at contemporary discourse surrounding race.

Boucicault also shows up in the prologue. He and BJJ brawl and yell “Fuck you! Fuck you!” at each other. This scene stages both the past’s affront to the present — in the existence of The Octoroon — and the present’s rejection of it — in the sly, irreverent style of Jacobs-Jenkins’s writing. The slip in articles in the plays’ titles is a gentle reminder that when we see a “black character”, that character should not bear the burden of representing “black people.” Jacobs-Jenkins achieves this elsehow in his insistence that Smith also play the white plantation owner George and villainous M’Closky; that Haynes Thigpen (Boucicault) double as the American-Indian Wahnotee; and that Ian Lassiter essay “Nigger Pete” in blackface. The melodramatic style of Boucicault’s play allows in this context for all kinds of obscene acting out that’s somehow legitimized by its own outrageousness. At the very least, it’s omni-slanderous.

Black actors also play black characters. The writing is at its warmest in the company of Minnie (Maechi Aharanwa) and Dido (Pascale Armand), “house slaves” who bicker and gossip in a twenty-first-century vernacular. How they talk — about meeting a hot guy at “a slave mixer over by the river” or the possibility of escape (“What’m I gonna look like, running through this hotass swamp?”) — brings the audience in close. It’s laughter in the dark, sure, but laughter with purpose. Their totally circumscribed aspirations, rewritten in contemporary idiom, are a comment on how we live now. When one of their number is accused of behaving too “ghetto”, she responds, “Bitch, I show you ghetto!” It’s slavery restaged as Jerry Springer.

Boucicault’s plot took a backseat as far as I was concerned, but it’s worth noting that it hinges on the love of plantation owner George for the “octoroon” (one-eighth black) Zoe (Amber Gray). There’s a slave auction during which Dido, Minnie and Grace (Danielle Davenport) strut like extras in a Beyoncé video. There’s a murder, and a melodramatic dénouement in which the killer’s identity is revealed through photographic evidence. As BJJ points out, “this would have been exciting a hundred fifty years ago.” Here, the revelation, which happens in Act IV of Boucicault’s play, is not even depicted onstage. Instead, the actors step out of the frame and retell it as breathless, farcical exposition, with BJJ suggesting that today’s theater is no place for the kind of “novelty” Boucicault peddled. This is ironic; no sooner has BJJ scorned the power of photography than the audience is stunned into the play’s longest silence, as a glittering black and white image of a lynching is projected over the set. In the foreground, white people mill and josh, apparently enjoying the spectacle. In a theater almost completely full of white people, the effect is one of considerable unease.

An Octoroon is full of these great “wow” moments. As director Sarah Benson has said, Jacobs-Jenkins “has a holistic sense of what works in the theatre and uncanny insights into technical issues.” So it is that she and he can pull off the same breathtaking trick twice in one show — first as one of the best scene transitions I’ve ever seen, and later as a special effect. Music is used to interrogate stereotypes of representation. Traditional metatheatrical laughs — like Dido and Minnie proclaiming after a long pause at the start of Act II, “all these white people are being really quiet” — are given new breath by their charged context. During the slave auction, the audience is addressed collectively as “gentlemen”, reminding us that history is really a whole onion of oppression. Then there’s the surreal figure of the rabbit, who quickly ditches the hopping with a “fuck it” shrug as if to say, Why should I behave like you expect me to? After the play’s beautifully staged final scene, the lights fade and the cast gathers, unseen, to sing a rousing final number. An Octoroon has deployed a whole arsenal of stage effects only to leave us, at its close, in low-tech darkness. At the end of this “monstrous story”, this “gory alle-gory”, a final, pressing question remains: “What do you put there in its place?” How do we break free of the burdens of representation? How long before a black playwright is just… a playwright?

We look forward to welcoming Branden Jacobs-Jenkins to our next Seriously Entertaining show, One Simple Rule, at City Winery on April 21. Buy tickets here.

← Prev: No Return Next: Cocaine Nights →