Undeterred by the Snowpocalypse-that-in-any-case-wasn’t, crowds flocked to City Winery on January 28 to celebrate the House of SpeakEasy‘s first birthday and bless its second year of existence. It was a star-studded affair: Uma Thurman was there; Dan Stevens; the amazing staff of Barnes & Noble Union Square… and that was just in the audience. 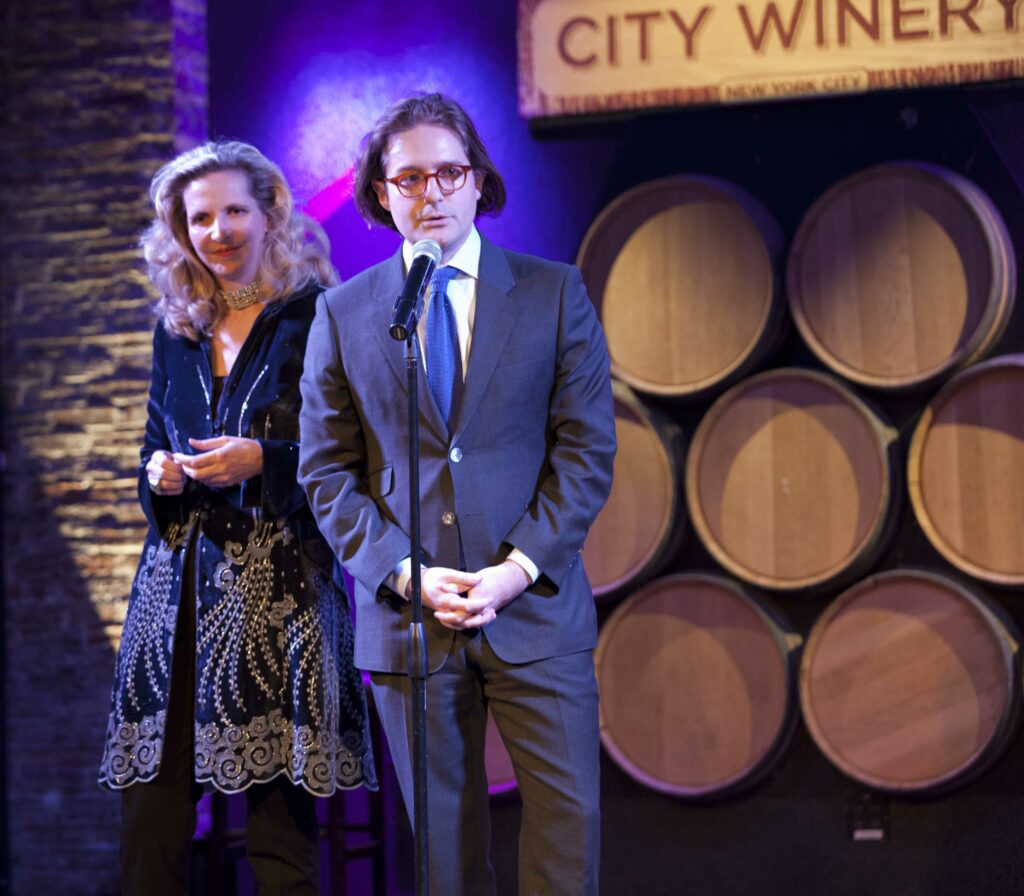 Click on the image to find out more about the House of SpeakEasy and its mission.

SpeakEasy founders Amanda Foreman and Lucas Wittmann emceed the evening’s proceedings and introduced SpeakEasy novices to the organization’s mission and programs. These include SpeakFreely, an already active program which enables teachers and their students to attend our Seriously Entertaining shows at City Winery; SpeakTogether, which aims to place writers in educational settings where they can share ideas with students, particularly those with little or no usual access to such experiences; and SpeakUp, currently in development, which is hoping to introduce good books and their writers into neighborhoods with few or no bookstores. 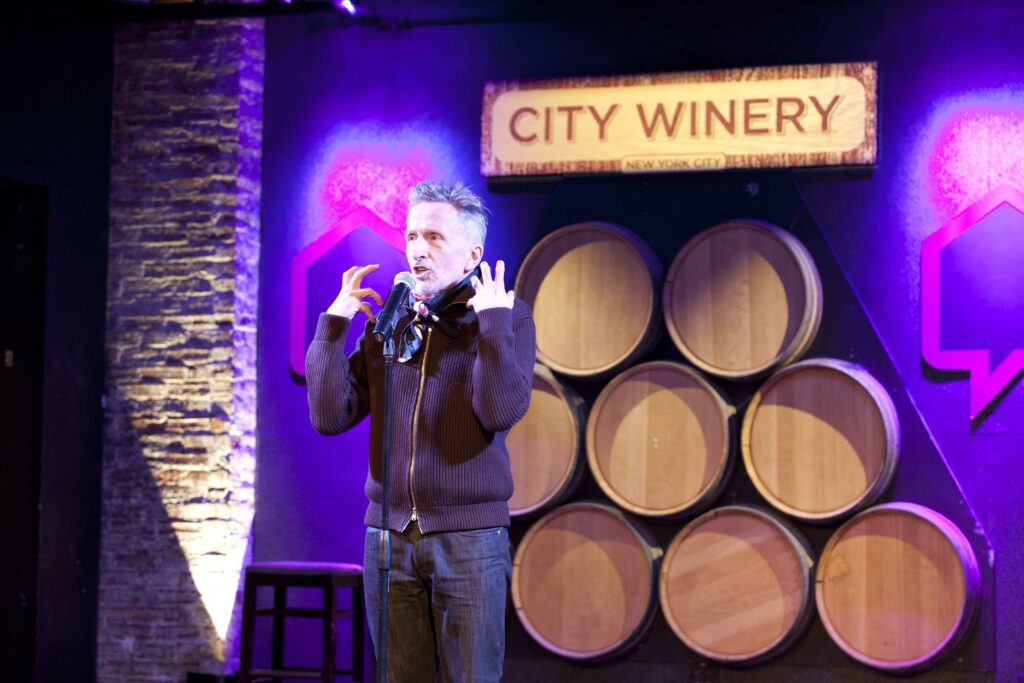 Click on the image to read our review of Simon Doonan’s latest book, The Asylum, out now in paperback.

Simon Doonan was our first speaker of the evening. Barneys New York’s Creative Ambassador and a writer and speaker of significant distinction, Simon has published several books including Gay Men Don’t Get Fat (2012), and his most recent, The Asylum: True Tales of Madness From a Life in Fashion (2014). He shared with us the true story of his audition for The Devil Wears Prada…

“For me, the wonderful thing about fashion is that it’s a great place for all these oddballs and eccentricities, and basically unemployable, kooky, quirky people,” he began. “These careerist, crazed bimbos in the book I didn’t recognize!” Nonetheless, two years later, upon receiving a call from the casting director asking him to audition for the role of Nigel, “the helpful homo”: “I picked up my little dog, Liberace — Norwich terrier — and I said to him, ‘We are going to claw our way to the top! I’m going to be in a movie starring opposite Meryl Streep!'”

He soon discovered, though, that he was not the only person called in. Watch Simon’s Seriously Entertaining story (which also featured in Page Six!) in full here. 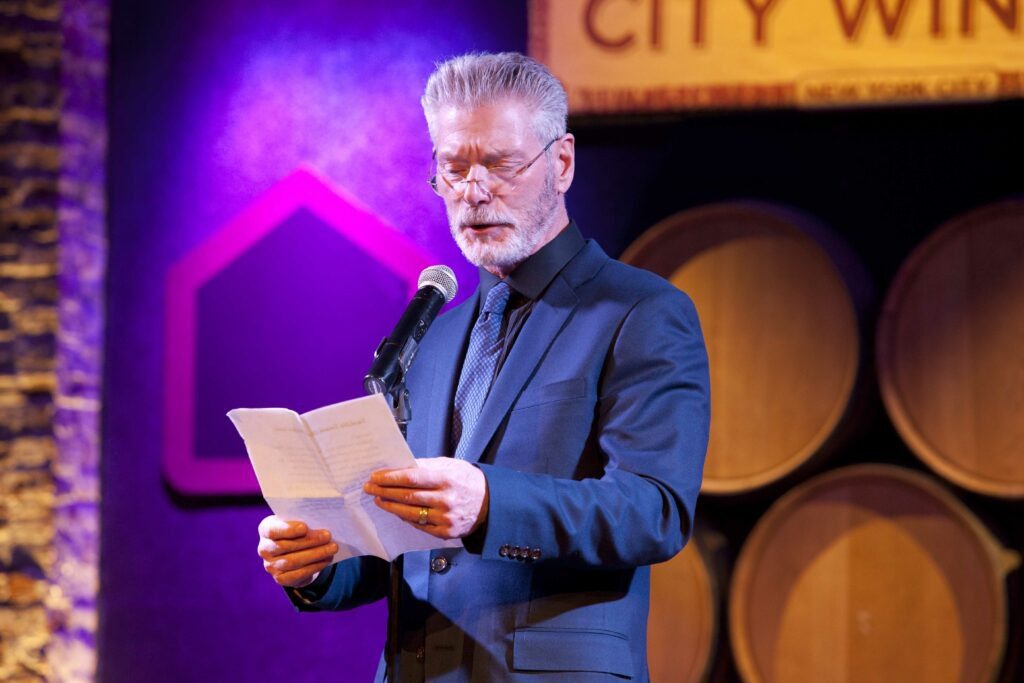 Click on the image to read our interview with Stephen Lang. Stephen discusses his writing process and the Avatar sequels.

“Ready for a quiz?” boomed Stephen Lang, our first guest host of the evening. The star of Avatar, Gods and Generals, Last Exit to Brooklyn, and many other great movies introduced our gala audience to three excerpts from literary classics in this month’s Tip of My Tongue contest. “I’m one of those Hollywood actors who just blurts it out,” he said, apologetically, as he began to recite…

Watch Stephen here, and SPOILER ALERT, guys: I’m going to put the three answers in white text, so highlight the blank space following this sentence if you want to know what they are.

Little House on the Prairie by Laura Ingalls Wilder; On the Road by Jack Kerouac; and The Last of the Mohicans by James Fenimore Cooper.

“I suspect that everyone is going to score a hundred on this quiz tonight!” Stephen quipped. 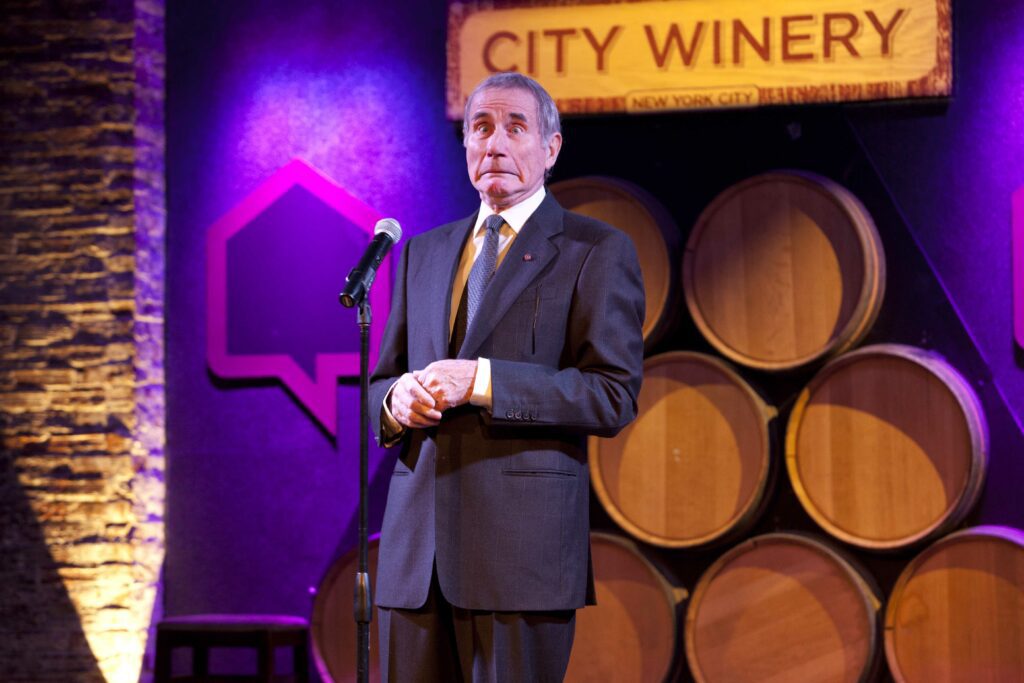 Click on the image to find out what slip of the tongue caused Jim Dale to pull this incredible face.

As the appetizers were cleared, we cleansed our palates and brushed up our Shakespeare with the marvelous, Academy Award-nominated, Tony-winning actor and voice artist Jim Dale. Jim began by recalling an occasion when Laurence Olivier popped by to cast him in his latest production.

“‘Jimmy, [began Olivier] I want you to play the part of Costard in Love’s Labour’s Lost… I’m directing it. Costard speaks the longest word in Shakespeare — honorificabilitudinitatibus.’ I said, ‘Wow! What does that mean?’ He said ‘Aaaah… [sotto voce] no f–ing idea…'”

Of course, Jim added, any Shakespearean role requires a little linguistic research. But, as he proved, you’d be amazed by how much Shakespeare you can quote without realizing it… Watch Jim’s amazing, tongue-twisting, cliché-busting outburst here. 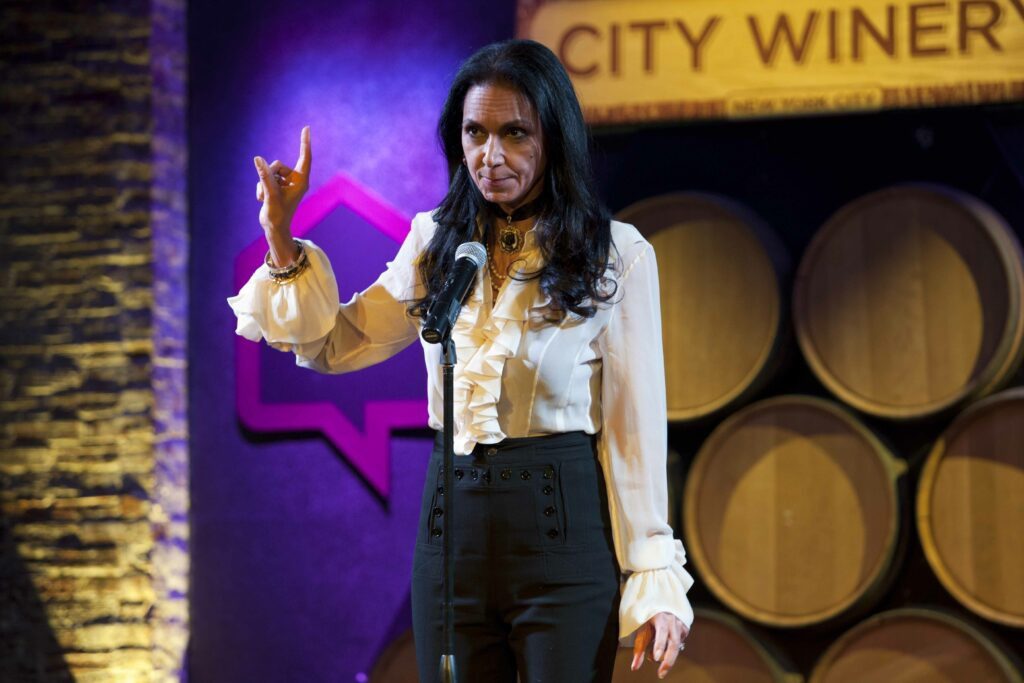 Click on the image to read our review of Susan Fales-Hill’s novel Imperfect Bliss.

Susan Fales-Hill took the stage by storm and the evening’ theme, Runnin’ Wild, to task.

That aside, Susan reached deep into her past for a riotous, Topanga Canyon-set tale featuring a sculptor with hands like… “Ladies, let’s talk about those hands. If sex were an art form, this would be its Michelangelo. I am not just talking about good sex. I am talking about, the earth has moved; I have been to the mountaintop; taken the Lord’s name in vain; and reached-the-universal-yes sex. This is runnin’ wild, ladies and gentlemen!”

Watch the rest of Susan’s story — an increasingly fabulous and manic tale of drugs, civil rights, race, and therapy bills (“$8 million and counting!”) — in full here. 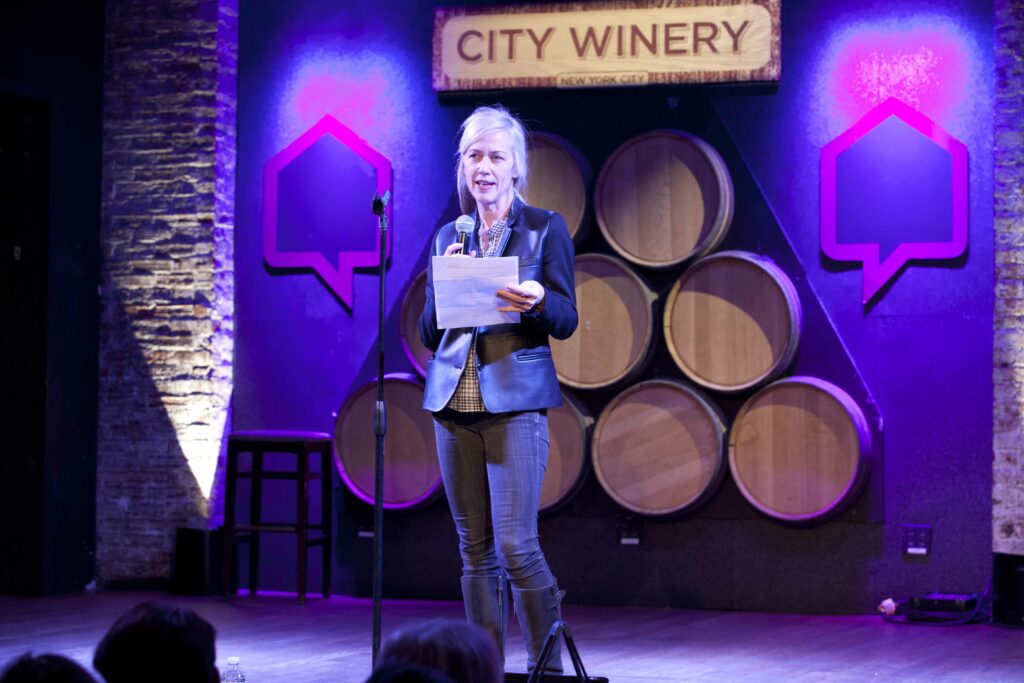 Click on the image to read a short essay about Susan Minot’s writing career.

Susan Minot was one of the stars of our premiere season last year, when she told a tale that can very literally be called “skin-crawling” (you can see it here). You should definitely check out her latest book, Thirty Girls (2014; paperback from Knopf coming soon).

We were delighted to welcome Susan back as a guest host for the self-descriptive quiz …And Then What Happened?

See how you do with these excerpts, which are taken from Charlotte Brontë’s Jane Eyre, The Great Gatsby by F. Scott Fitzgerald, and Maurice Sendak’s classic Where the Wild Things Are. 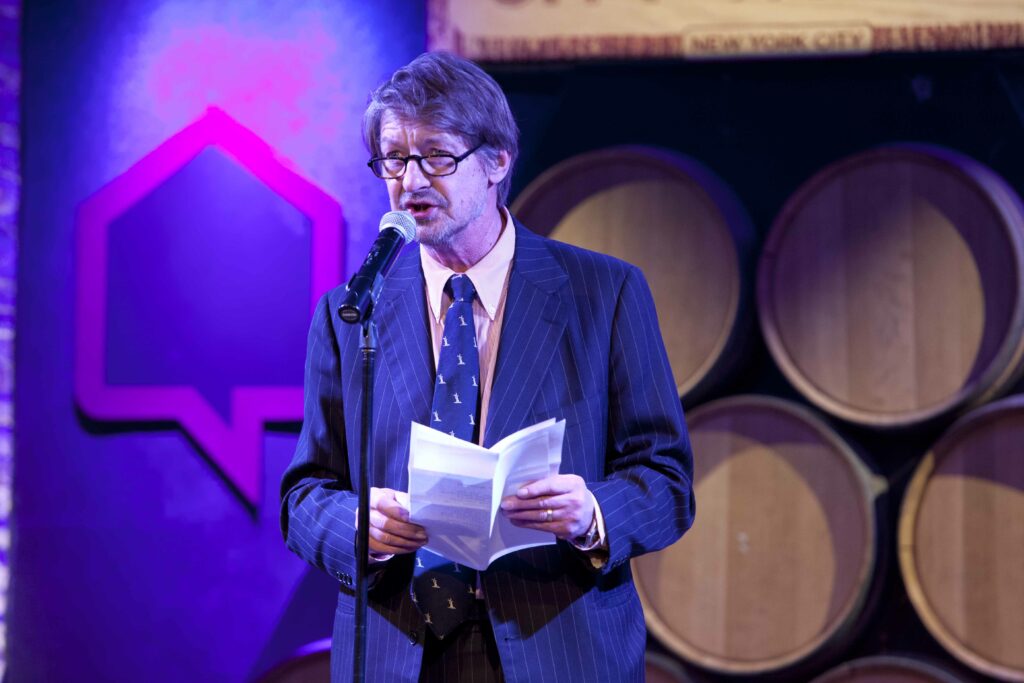 Click on the image to read our review of P.J. O’Rourke’s book about the Baby Boom.

“I’d like to give a little talk about an entire generation that ran wild,” began P.J. O’Rourke, our final guest of the evening. “We, the Baby Boom, are the generation that changed everything. Of all the eras and epics of Americans, ours is the one that made the biggest impression… on ourselves.”

In a hugely entertaining talk, based partly on his recent book The Baby Boom: How It Got That Way And It Wasn’t My Fault And I’ll Never Do It Again (Grove Press, 2014), P.J. reviles and celebrates the seventy-five million of his cohorts and their leisurewear hegemony.

“We are the bullshit generation,” he said. “We excel at bullshit. We excel at everything that requires bullshit: politics and entertainment, hedge funds, the creation of the World Wide Web… If it’s bullshit, it’s us. And I have a vision to present to you. The bullshit of the Baby Boom is the world’s future.”

Don’t forget to book your tickets for our next Seriously Entertaining show, No Return, on March 9 at City Winery.