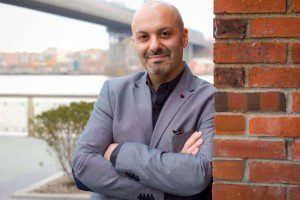 On May 21, he will be speaking at House of SpeakEasy’s Seriously Entertaining show, The Root of it All, alongside Damian Barr, Eve Ensler, and Kevin Young.  We spoke to Boris ahead of the show.

What is your earliest memory involving reading or writing?
A small bedroom in Minsk, Belarus, in 1980-something. Writing desk, fold-out bed, Persian carpet on the wall, Persian carpet on the floor. On all fours over the latter, yours truly mesmerized by the sports pages of Nedelya (The Week). The first and last period of my life that I would be (consumed by professional sports, that is), though, to this day, I retain a fascination with the raw, elemental nature of the contest involved: “The separation of twenty-two previously indistinguishable men into two adversarial uniforms, the pride of a city behind each, was a gnomic, primitive message from some other dimension in which, as the pig slaughterer whose summer cottage we rented had so essentially put it, ‘there will be you—and there will be them’,” as I wrote in Savage Feast, my most recent book.

What is your favorite line from your current work?
Not necessarily my favorite, but the one that came to mind just now: “My hunger has been good for my work, and a near calamity for everything else. At least I know not to rely on it.”

What advice would you give to aspiring writers?
There’s nothing sweet about rejection, but you’ll be a stronger person, in ways that go well beyond writing, for having figured out a way to keep going. Be an animal about the work: No dabbling, no waiting for inspiration. And: Get as far away from popular culture as you can.

What writer past or present do you wish you could eat dinner with?
I prefer to experience writers through their books. In real life, they are rarely who you thought they would be. And why should they be?

What are you reading right now?
Philip Roth’s Collected Nonfiction. Never have I appreciated an author’s nonfiction more while disliking some of his fiction less. Well, David Foster Wallace.

Are there any quotes you use to inspire you?
It changes all the time, and my memory is terrible, so unless I inscribe it on my arm, it’s not going to inspire me for very long. (And if you do inscribe it on your arm, by virtue of its omnipresence it will become invisible and meaningless, so that’s not the solution, either. Why I never put any photos on the shelf.) So the most inspiring thing is ideally something in the book I’m reading. In this case, to open a random page in the Roth: “Think of the art of the adulterer: under tremendous pressure and against enormous odds, ordinary husbands and wives, who would freeze with self-consciousness up on a stage, yet in the theater of the home, alone before the audience of the betrayed spouse, they act out roles of innocence and fidelity with flawless dramatic skill.” That’s a wise person speaking. The intelligence and articulateness of that line is what’s inspiring — it makes you want to be intelligent and articulate in turn.