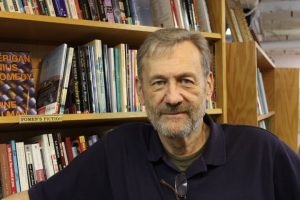 Michael Bronski is an independent scholar, journalist, and writer who has been involved in social justice movements since the 1960s. He has been active in gay liberation as a political organizer, writer, editor, publisher and theorist since 1969. He is the author of numerous books including the recently published A Queer History of the United States for Young People. He is Professor of the Practice in Activism and Media in the Studies of Women, Gender and Sexuality at Harvard University.

On June 18, he will be speaking at House of SpeakEasy’s Seriously Entertaining show, The Song Sings Itself, alongside Trish Hall, John Burnham Schwartz, and Darcey Steinke.  We spoke to Michael ahead of the show.

What are you currently working on?

I am now working on The World Turned Upside Down: The Queerness of Children’s Literature which is not about gay characters in books but an investigation into the tension between children’s limitless, anarchic imagination and the social mandate to turn them into responsible adults. It is wide ranging – from nursery rhymes to Victorian children’s novels to Harry Potter – and looks at children’s relationships to sex, death, and psychic survival. Obviously I never got over my “Freud period” in college. I write about politics, sex, and popular culture and  am mostly interested in social and cultural disconnects that we presume are natural For me these are often fissures and cracks that potentially lead to new ways of thinking. If something is “obvious” it is probably ripe for questioning. Future project include a book on why the American 1950s was the queerest decade ever, and a history of women’s political resistance through popular song. 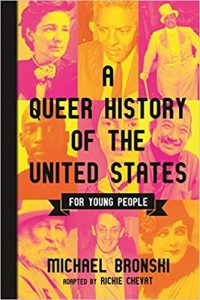 “Since before this county was founded, there have been people who refused to conform to gender and sexual norms living in and creating America. Often, because they lived outside certain cultural traditions, they led the way for new ways of seeing the world, new ways of seeing America. Sometimes they were persecuted for this; sometimes they were praised.” –From A Queer History of the United States for Young People

I am reading mystery novels, written in the 1920’s,  by Father Ronald A Knox, an Anglican convert to Catholicism who was a noted theologian, popularizer of religion and media star. On the surface the novels have fairly routine plots and titles – “Footsteps in the Dark” – but are curiously queer, theologically infected, and highly entertaining.

Brigid Brophy: famous in the 1970s in the UK and US, she is now mostly forgotten. Brilliant thinker and critic, her novels are miracles of precision, psychological insight, and wit.

“Once an angry man dragged his father along the ground through his own orchard. ‘Stop!’ cried the groaning old man at last, ‘Stop!’ I did not drag my father beyond this tree.” –From The Making of Americans by Gertrude Stein

Are there any quotes that inspire you?

“History is a novel whose author is the people,” Alfred de Vigny