Elliot Ackerman is the author of the novels Dark at the Crossing, which was a finalist for the National Book Award, and Green on Blue. His writings have appeared in Esquire, The New Yorker, The Atlantic, and The New York Times Magazine, among other publications, and his stories have been included in The Best American Short Stories. He is both a former White House Fellow and Marine, and served five tours of duty in Iraq and Afghanistan, where he received the Silver Star, the Bronze Star for Valor, and the Purple Heart.

On September 18, he will be speaking at House of SpeakEasy’s Seriously Entertaining show, The Long Way, alongside Faith Salie, Sofija Stefanovic, and Richard M. Cohen. We spoke to Elliot ahead of the show.

My father, who I love dearly and who also has always been a workaholic, would watch my brother and me on the weekends so that my mother could work (she is a writer). Part of his regimen with us was that we’d have to read for at least an hour in our rooms. Those Saturday afternoons, forced to sit in my room and read were one of my earliest memories of reading. I learned to love it despite the odds. 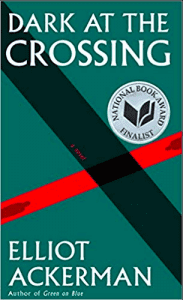 Probably the opening: “I want you to understand Mary and what she did. But I don’t know if you will. You’ve got to wonder if in the end you’d make the same choice, circumstances being similar, or even the same, God help you.”

I don’t like playing favorites, so I’ll tell you a line that I like. Also, it’s not from a novel but from a story, which I hope you’ll forgive. It’s by Hemingway, his story “In Another Country.” “In the fall the war was always there, but we did not go to it any more.”

Lea Carpenter, my love, who is a beautiful writer. I get to have dinner with her most nights.

The characters that I’ve written.

Although I write fiction, I have to confess that I’m a bit of a realist. My fictional and real world are often one in the same. So I choose this world, the here and the now.