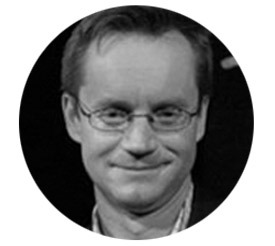 Nothing generates as much excitement around town as a smash hit musical. Or, if you’re a bit of a vulture (and I am), a complete fiasco wherein millions of dollars are lost, people are at one another’s throats and reputations are ruined.

— Michael Riedel, in an article from September 2003

Michael Riedel was our guest at last week’s Seriously Entertaining “Are You For Sale?” at City Winery. He spoke with wit and love of the late Jacques le Sourd, a critic-colleague of his whom he had known for many years. (In)famous for his outspoken, occasionally outrageous criticism, Riedel has worked as theatre critic for the New York Post for more than 15 years. To celebrate his SpeakEasy debut, we take a look at his work in the Post and on his PBS show Theater Talk.

‘Bullets Over Broadway’ on target to kill at Tonys

A recent one to kick off, covering the musical adaptation of Woody Allen’s 1994 movie Bullets Over Broadway, which is currently in previews at the St. James Theatre. Part of what makes Riedel’s work so entertaining is his acknowledgement of his own reputation. It was there in his work on the TV show Smash, whose writers referred to him as a “Napoleonic little Nazi” before asking him for a cameo. In this piece on the new sensation-in-waiting, he is full of prophecy: “‘Bullets Over Broadway’ has been in previews just three days, and already those in the know — that would be me! — are sensing it’s the show to beat this season…”

Riedel’s perverse advocacy of Spider-Man: Turn Off the Dark has been going on since before previews began in 2010. What he nows calls his “favourite show of all time” has certainly given him a lot of material, as in this marvellous piece from November 2010:

[He was] supposed to fly off in a dramatic end to the first act. Instead, Spider-Man got stuck in midair and swung back and forth over the crowd as three stagehands leaped up and down futilely trying to grab onto one of his feet to haul him back to earth.

‘Taboo’ Postmortem: Who & What Went Wrong

When asked for a comment on Riedel, Rosie O’Donnell, who produced Taboo, told New York Magazine, “I hope you eviscerate him”. Reading this delicately constructed devastation of a piece from 2004, one can perhaps see why:

There are no “villains” in this story, really – just a volatile, distracted and ultimately ineffectual producer; a weak director; a timid bookwriter who watched his key scenes get cut because they couldn’t be acted or directed properly; and a star, Boy George, who wrote a fine score (let’s give him his due) but wasn’t much of an actor.

Riedel has long had J. Edgarish access to backstage gossip, and his articles are heavily spiced with chat overheard from the aisles and passages of Broadway’s theatres. In this gloriously telltale piece, he takes a candid look at Amanda Plummer’s appearance in Tennessee Williams’ The Two-Character Play last year:

As for Dad [actor Christopher Plummer], he attended a later performance — but left at intermission. “I just have to go,” he muttered to a theater staffer. “Don’t let her know.”

Theater Talk
Happy 21st birthday to Theater Talk, the PBS show Riedel co-presents with Susan Haskins. It’s a fantastic show comprising long, in-depth interviews with the top talent on Broadway and the critics who take them apart. Recent guests have included Cyndi Lauper and Harvey Fierstein on Kinky Boots and knights Ian McKellen and Patrick Stewart on No Man’s Land and Waiting for Godot.
“Your show made my name in this business, and I am grateful, truly grateful.” So says Riedel to Glen Berger, co-writer of Spider-Man: Turn Off the Dark and the author of the backstage chronicle The Song of Spider-Man, in a Theater Talk from late last year. This is the first of a two-part interview with Berger on the publication of his book lifting the lid on the process of bringing Spider-Man to the stage. Did you know Neil Jordan was once attached to the show? Watch on, dear friends…