Are You For Sale?

Where might you find French resistance fighters, E.E. Cummings, a Broadway critic with a freewheeling approach to life, Bessie Smith singing the blues, and a Wimpy Kid with a passion for Brazilian TV? Only at the House of SpeakEasy… 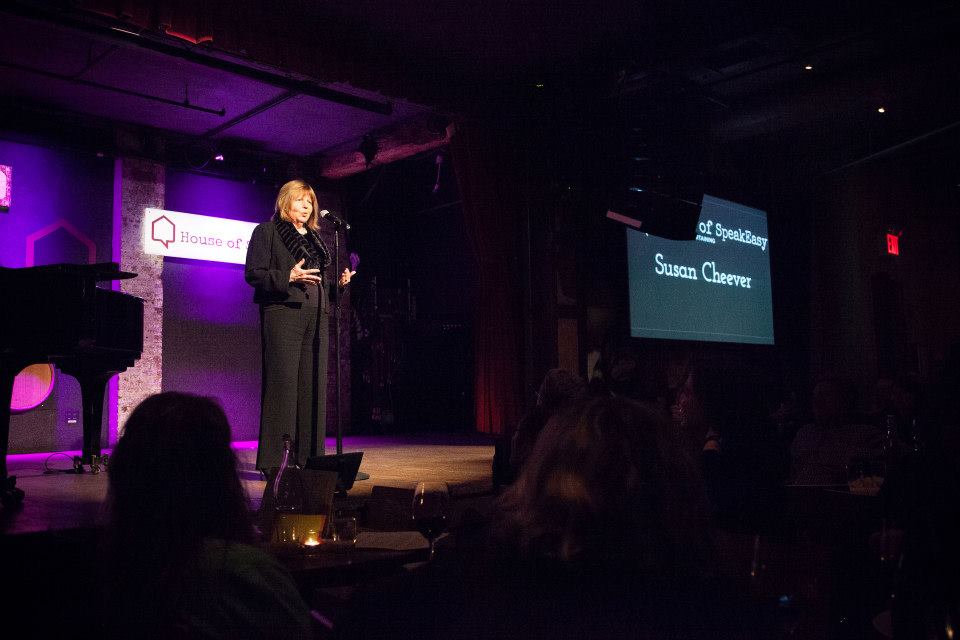 Susan Cheever was first up this month, answering the evening’s main question right off the bat: “E.E. Cummings was certainly for sale!” Now acknowledged as one of the twentieth century’s greatest poets, Cummings wasn’t beneath hawking his poetry round the publishing houses back in the twenties and thirties, even dedicating one poetry collection (No Thanks) to the fourteen publishers who’d turned him down. Last month Cheever published E.E. Cummings: A Life (Pantheon), and it was from this that she took her tale for the night.

Cummings had one child, Nancy, from his first marriage, to Elaine Orr. “Everything went well until Elaine fell in love with someone else — a real son of a bitch called Frank McDermott,” as Cheever recalled. Elaine annulled her marriage to Cummings and took the baby with her to Ireland to live with McDermott. “Finally, Cummings didn’t see Nancy any more. And Nancy led a kind of expat princess life, knowing absolutely nothing about her past.”

Two decades later, through a series of coincidences, Nancy would see her father again. Despite not knowing the truth of her origins, on meeting Cummings she “knew that something had happened.” They met again, many times, and eventually Cummings asked to paint Nancy’s portrait. Back in New York, she visited him repeatedly, enjoying herself “waaaay too much”. Deciding that she had to cut off their friendship for the sake of her marriage, she went one more time. And it was on that occasion that she blurted out to him: “I think I’m falling in love with you.”

“So he puts down his brush,” said Cheever, “and says as gently as he can, ‘Has nobody ever told you that I am your father?'”

After the initial strain of this astonishing revelation, and in the fifteen years remaining of Cummings’s life, their relationship became extremely close, as evidenced by their moving correspondence. It seems, concluded Cheever, “that Cummings was right when he believed in a friendly fate. He had some kind of friendship with the way things happened.” 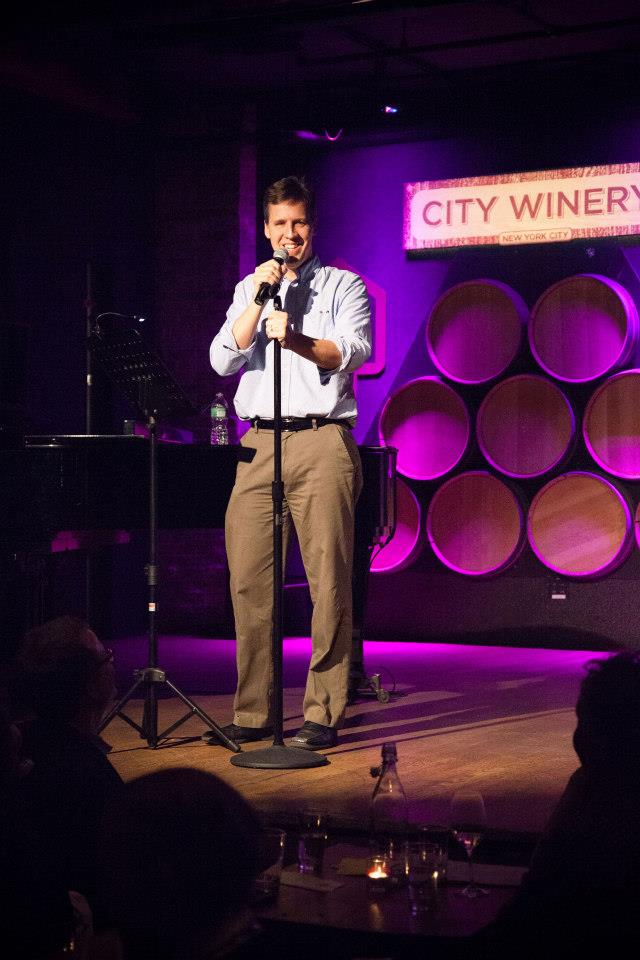 “Now for the children’s part of the evening,” began Jeff Kinney, the bestselling author of the Diary of a Wimpy Kid series, as he bounded onto the stage. Kinney’s rise to publishing blockbusterdom has been meteoric, though not without its odd moments, as he was delighted to tell us. One of the most surreal took place in Brazil, on a media tour with TV network Globo.

“I’m a huge fan of Xuxa,” he revealed. “She’s a supermodel, pop star, kids’ entertainer; she dated Pelé when she was like seventeen… She tried to export her show to the US in the nineties, and I watched every show at least ten times. I told this to the Globo guy and he was very taken aback. And then he goes to me, ‘You will meet Xuxa. You will meet Xuxa.'”

“When I did meet her I told her my whole saga: falling in love with her as a college student, watching the show… Everybody knows Super Xuxa versus Satan is a classic! Then: ‘We will make movies together,’ she said.”

The following night Xuxa turned fifty. “It was like a national holiday!” At her party, she promised Kinney, she would announce to the national media their intention to work together. Fearful of the beast he might have unleashed, Kinney ummed and aahed about going. Tantalisingly, he left the House of SpeakEasy on a cliffhanger.

“I’m not gonna tell you what I decided. But check IMDB in a few months and look at the credits for Super Xuxa versus Satan 2…” 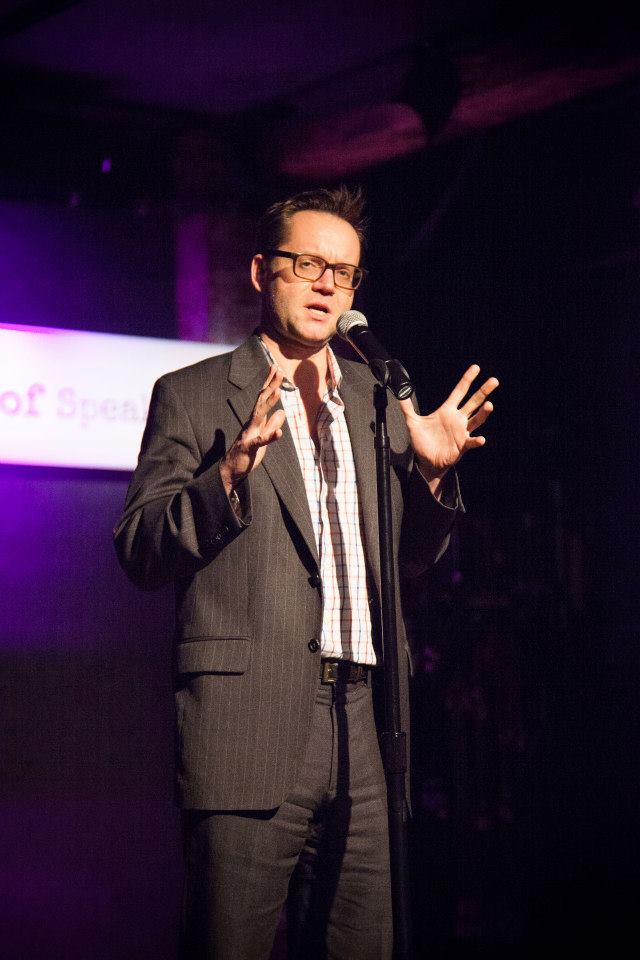 Riedel’s subject was one of his great influences: the late Jacques le Sourd, who died last month (read his New York Times obituary here). Riedel recalled him fondly: his flamboyance (“I was gay as a goose in the womb!” he’d say); his penchant for Hermès ties; and the way his preppy appearance prompted police in Westchester, where le Sourd lived for many years, to call him “Clark” (as in Kent) whenever they pulled him over for drunk-driving.

His first review was for Chicago in the seventies, and from then on, despite having little or no prior interest in theatre, he was the syndicated critic for Gannett Suburban Newspapers.”He liked the lifestyle,” continued Riedel. “He got up at four, drove in to the city, went to the openings, wrote his reviews at the Pan Am Building, went to Studio 54 to do a maaaaassive load of quaaludes, and then back up to Westchester where it was ‘Hey Clark, get home safe!'”

On one notably freewheeling occasion, le Sourd was assigned to cover the 1993 World Trade Center bombing. He donned a Hermès tie and hopped in a cab, only to find himself unable to move much further south of the park. Unperturbed, he jumped out for a haircut at Bergdorf Goodman’s and then headed to his old haunt, Joe Allen’s. There, he asked them to switch on the news and then called his editor. “He repeated, word for word, what NBC was saying about the bombings… and a year later Gannett won a prize for reporting it!”

In 2008 le Sourd lost his job. “‘Riedel,’ he said to me, ‘I’m an old Bentley that nobody can afford.'” He later moved to Manchester, England, to care for his mother, and it was there that he died. “Jacques was not for sale,” Riedel concluded, “because nobody could afford him.” 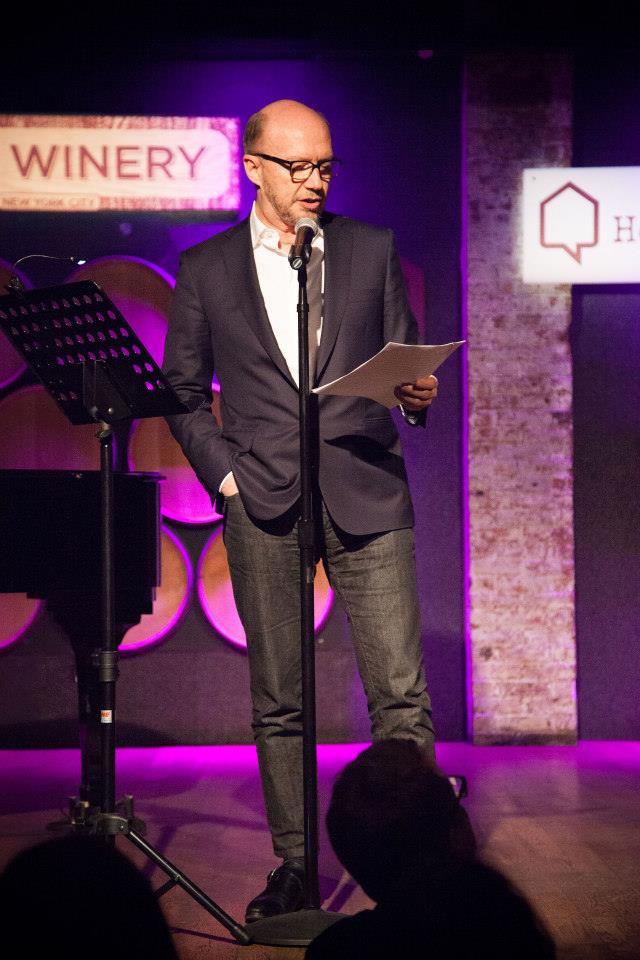 Paul Haggis, the Oscar-winning screenwriter and director, took to the stage just before the intermission as the host of our literary quiz, The Tip of My Tongue. This month’s mystery passages, correctly guessed by eight guests, were from Thackeray’s Vanity Fair, Death of a Salesman by Arthur Miller, and New York classic Breakfast at Tiffany’s. Haggis’s next movie, Third Person, which stars James Franco, Mila Kunis and Liam Neeson, is scheduled for release on June 19.

Kate Mosse was our guest on the day her most recent novel, Citadel, was published in the US, and guests listened rapt to her friendly hushed voice as she revealed the origins of her bestselling Languedoc trilogy.

“In 1989 my husband and I bought a house in the shadows of Carcassonne in the south of France,” she began. “I felt I belonged there, that somehow it was my place. It was there that I learned about a group of Christian heretics called the Cathars… and that became Labyrinth.” 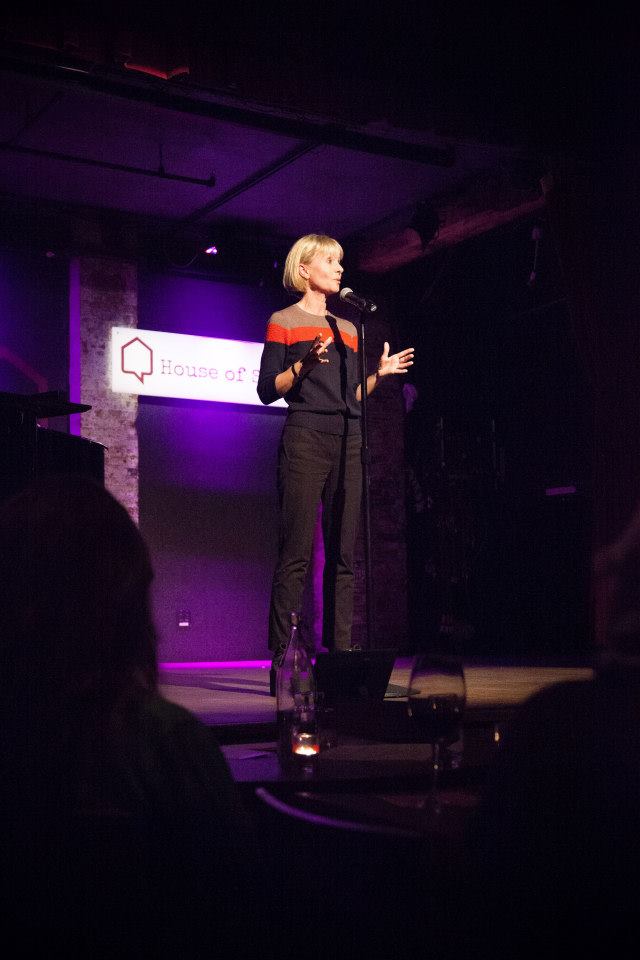 Mosse had been inspired to write by her father, who had read her all the stories he’d enjoyed as a child. “All very inappropriate! Like King Solomon’s Mines, which is all blood, impaling, sex…. Sex! Another form of impaling…” When she was writing Labyrinth, she told him that she was looking to recreate the sort of literature they’d both enjoyed, “BUT the heroes in my story are women. ‘Darling,’ he said to me, ‘I’ve waited all my life for a woman to ride in on a horse and rescue me!'”

For Citadel, Mosse was inspired by an inscription at the bottom of a war memorial in Carcassonne which names the male leaders of the local resistance against the Nazi occupation along with “two unknown women”.

“We don’t know what people had to sell of themselves for all of us to be free,” said Mosse. “But I knew the sort of women they must have been. And we hope we would have been these people, who stand up for the right thing. The stories of those brave women and men are the same as what’s going on all over the world today.” 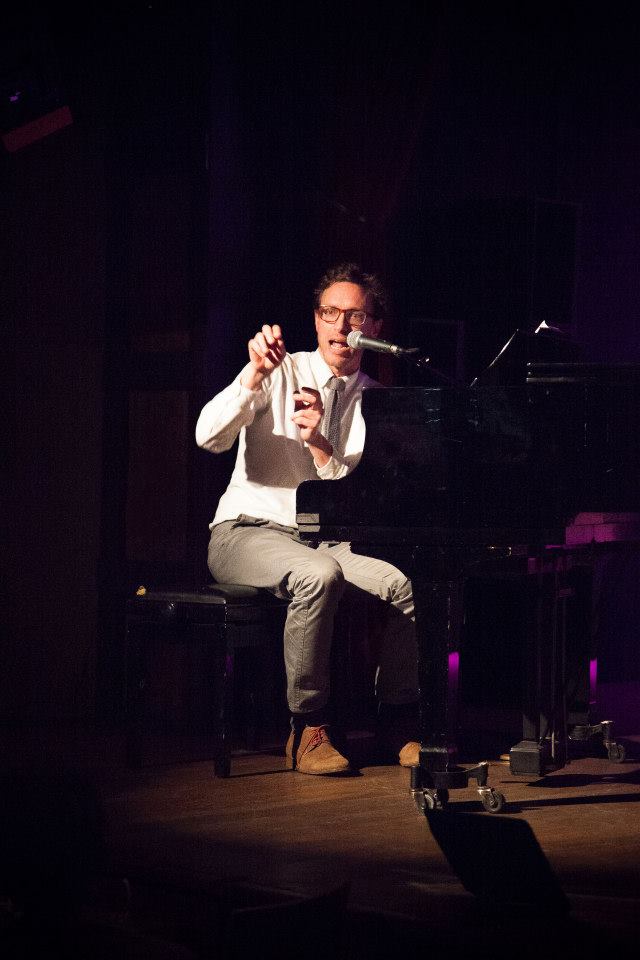 “I wanna talk about what it means to make money as a songwriter,” declared Michael Friedman at the start of his hugely entertaining romp through early popular music in the US. “But popular music in America has always been really complicated to talk about…”

Friedman, seated throughout at City Winery’s piano, began and ended with Stephen Foster, a man commonly acknowledged as the father of American popular music. One of his earliest hits, “Oh, Susanna”, which sold over 100,000 copies in sheet-music form, demonstrated Friedman’s earlier point precisely: “‘I come from Alabama with my banjo on my knee’? So much of the iconography of the South was created by a white guy from Pittsburgh who at that point had never even been there!”

In a witty, freewheeling talk, Friedman introduced us to the astonishing racism of early musical hits including “The Laughing Coon”, as performed by George Washington Johnson, the first African-American recording star. He closed with another great African-American performer, Bessie Smith, the Empress of the Blues, whose recording of Irving Berlin’s “Alexander’s Ragtime Band” drew on the influence of Foster and, he speculated, “might have been a kind of ‘fuck you’ of her own”…

If you’d like to read more by Friedman on this period of music, his excellent New Yorker blog on Stephen Foster was published last week and can be found here.

Tickets are now on sale for our next Seriously Entertaining event, “In Case of Emergency”, which comes to City Winery on April 28. Buy them here!
← Prev: Curtain Call: Are You For Sale? Next: "Go for the pleasure first, always": Lars von Trier's NYMPH()MANIAC, Vol. I →