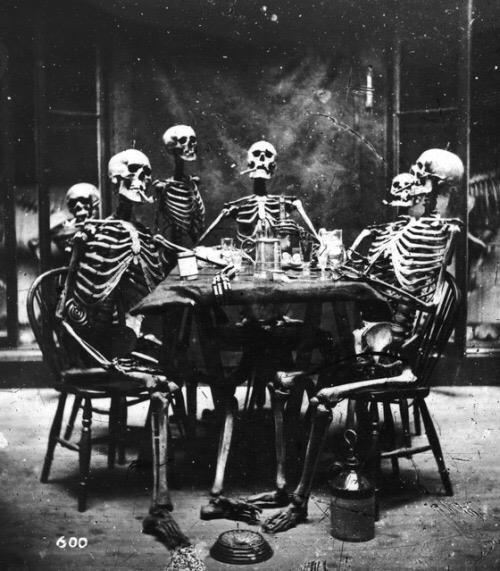 Totentanz for Mezzo-Soprano, Baritone, and Orchestra (2013)

A medieval frieze destroyed during the Second World War is the source material for Thomas Adès‘s new work, Totentanz, which received its U.S. premiere last week. Conducting the New York Philharmonic was the composer himself. Entering briskly, almost athletically at the start of the program — play began while the audience was still shushing itself — he led the orchestra in bright renditions of Beethoven’s first symphony and the overture from Berlioz’s lesser-spotted opera Les Francs-juges. In the second half, though, that athleticism came into its own. With its vastly expanded workforce — the percussion section alone called for bamboo canes, anvils, snake rattles, a referee’s whistle, and, according to the program note, bones — Totentanz asks of its conductor a near-martial level of control and brute strength. As the New York Times remarked, this was “a real musical event.”

An event and also a spectacle. The scene is judgment day. Death, newly arrived on Earth, invites humanity, from the Pope on high to a lowly baby, to join him in his danse macabre. In playing this lurching dance, the musicians become almost like actors. The frenzied sawing of the violins, and the hammering and scraping and striking in the percussion, is quite a sight, like something from a Bosch painting or the forges of Mordor; it’s violent, infernal activity. And perhaps only when confronted with the visuals can one appreciate the sheer ambition of Adès’s work. It’s a shame that this makes a studio recording of Totentanz somewhat unlikely — when I spoke to Adès after the performance he confessed that an orchestra with in-house recording facilities is the best hope — but it’s an incredible argument in favor of ditching the iPod and returning to the concert hall. (That said, the lack of a formal recording has at least ensured that the world-premiere performance at the 2013 Proms remains untouched on YouTube.)

The music of the dance recalls the oscillating motifs of the composer’s earlier Polaris (2010) and Violin Concerto (2005), both of which expend themselves hunting down a kind of harmonic stability. This is something Adès has described as a sort of white whale for him:

That’s what animates everything in music — stability and instability. I’ve been asking myself: is there such a thing as absolute stability in music, or in anything? I came to the conclusion that the answer is no: where there is life, there is no stability. However, a lot of musical material — maybe all — tends to desire stability or resolution of some kind, unless it’s held in a kind of equilibrium, which is still a volatile situation.*

Hence the explosive finale in the Violin Concerto, the question-mark at the conclusion of In Seven Days (2008), and what Adès calls the “complete splaying… of its material” at the end of Polaris. While Totentanz concludes rather differently — more in the vein of the similarly huge Tevot (2007), which fades slowly to black — its apparent stability at the end is offset somewhat by it occurring at the end of the world. 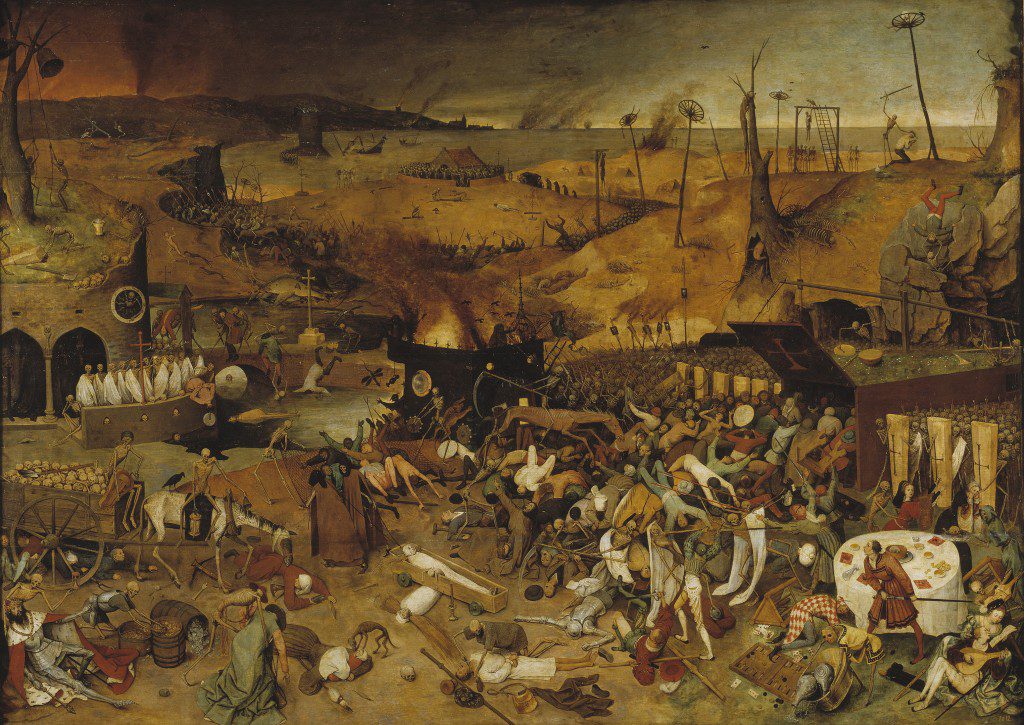 Pieter Bruegel the Elder’s The Triumph of Death, c. 1562

Totentanz launches with a diabolical fanfare. Four descending notes constituting a tritone — nicknamed by musical theorists the “devil’s interval” for its sinister discordancy — are sounded in contrary motion to an ascending scale. These opposing forces then ignite the first incredible crash in the drum department. From then on, it’s slaps and whistles, trilling woodwind bursts, and muscle-truck brass all the way. There are horror-movie glissandi in the strings and solemn chimes and gongs from the percussion. One might hear, in the ever-threatening dance, a quotation from Berlioz’s “Dream of a Witches’ Sabbath” (memorably borrowed by Wendy Carlos for the opening of The Shining), harking back to Adès’s choice of appetizer. The ghost of Witold Lutoslawski, to whose memory Totentanz is dedicated, haunts the rich textures of many of the piece’s more complex sections. Meanwhile, the shock-and-awe tactics of some of western music’s most terrifying passages — Carmina Burana, Verdi’s Requiem — are evoked when Death is at his most powerful. It’s a thrilling drama.

Indeed, the forty minutes of Totentanz fly by, perhaps reflecting Death’s merciless efficiency in the dispatching of his duties. “He who is called king today / is pale and prostrate tomorrow,” he sings to the King. To the Knight: “You must come quickly, / light-armed, to dance with me.” “Lead me into eternal life!” begs the Handworker. “It’ll be hard for your soul,” comes the reply. It’s an intimidating performance by baritone Mark Stone. Some of the earlier, more socially important characters (all sung beautifully by Christianne Stotijn) receive a couple minutes’ airtime, but all — the Pope, the King, the Monk, the Knight — are quickly overtaken by Death in his unforgivingly democratic approach. It’s only in the closing minutes, when he encounters the Maiden and the Child, that he softens. Gone is what Stotijn referred to in the Wall Street Journal as the “ecstasy of panic” that infects his earlier victims. What’s left is a sort of sublime humility. Death is chastened; the music slips into a major key and a more lyrical mode; there’s perhaps even a hint of regret in “You tender babe, / behold the scythe’s untimely blow.” The Maiden, meanwhile, confronts her fate stoically: “I follow, since I must, / and I dance, as I can.”

The final chanted “tanzen” (“dance”), as piano, strings and drum wind down to a complete standstill, represents as much stability as Adès can find. This exhortation, coupled with the music’s lyrical turn, has a talismanic quality about it — as if what has come before, the ecstasy and the carnage, might in some sense console those left alive.

* Direct quotes are taken from Thomas Adès: Full of Noises — Conversations with Tom Service (Farrar, Straus and Giroux, 2012). A great book, too.

¶   “A guide to Thomas Adès’s music” — Tom Service’s 2012 piece for the Guardian is a neat companion to their book of interviews.

¶   “They’re Always Borrowing His Stuff” — a light-hearted look by William Robin for The New York Times at Adès’s influence on other contemporary composers and musicians.