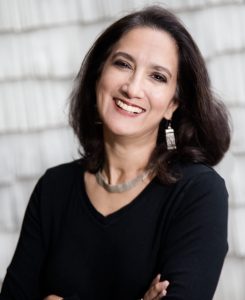 Marina Budhos is an author of award-winning fiction and nonfiction. Marina is the author of the young adult novels Tell Us We’re Home, which was a 2017 Essex County YA Pick, and Ask Me No Questions, recipient of the first James Cook Teen Book Award, an ALA Best Book and Chicago Library’s Best of the Best, among other awards. Her most recent novel is Watched, a follow-up to Ask Me No Questions, which takes on surveillance in a post 9/11 era. Watched received an Asian/Pacific American Award for Literature YA Honor (APALA) and is an Honor Book for The Walter Award (We Need Diverse Books). Her newest novel, The Long Ride, is about three mixed-race girls during a 1970s integration struggle, is due out from Wendy Lamb/Random House in 2019.

My escape, I must admit, is more good TV series such as Ramy or Insecure or a new documentary series on World War II with colorized footage. However, on reading this summer, thanks to a reading group, I have been diving into E.M. Forster’s works–rereading A Passage to India, Howard’s End, A Room with a View.

I guess just because I was in it for so many books this summer–any of Forster’s novels set in England. Such an interesting period.

Not so much a famous author, but my husband’s aunt, originally born in Russia, emigrated to Israel, sometimes living in New York City, apparently used to sigh and say, “It’s not so simple.” I often think of her when everyone gets heated and takes to the barricades in their opinions.