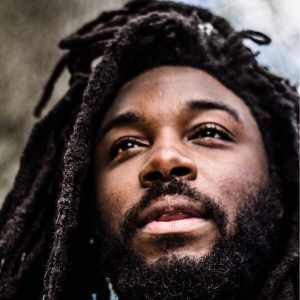 Jason Reynolds is the New York Times bestselling author of the Coretta Scott King Honor book, The Boy in The Black Suit, and co-author of, All American Boys, with Brendan Kiely, also a Coretta Scott King honor book as well as the inaugural recipient of The Walter Dean Myers Award. Reynolds’ free verse novel, Long Way Down, was a National Book Award finalist, received an Edgar Award and The John Newbery Medal. His book Look Both Ways: A Tale Told in Ten Blocks was also deemed a Coretta Scott King honor book, along with being a National Book Award finalist.

Aside from his young adult works, Reynolds is also the author of the middle grade novels, As Brave As You, which won The Kirkus Prize and was nominated for an NAACP Image Award, and Ghost, the first of the four book TRACK series which was selected as a National Book Award Finalist. Its sequel, Patina, was nominated for an Audie Award, and the third installment, Sunny, won the Audie Award for Middle Grade, followed by the final book, Lu.

He has most recently released Stamped: Racism, Antiracism, and You: A Remix of the National Book Award-winning Stamped from the Beginning, re-imagining the original story by Ibram X. Kendi.

In his own words: “I create characters first. I love people. I love the ticks and hiccups of humanity. So I start there, and distill the characters until they are real. Then they do all the work for me.”

To buy this writer’s work from our bookselling partner, Bookshop, click below. Doing so will also generate income for House of SpeakEasy Foundation – another way we’re connecting you, and underserved communities of New York City, with the best writing of today.