No Satisfaction was a Seriously Entertaining presentation by the House of SpeakEasy at City Winery NYC on Monday, November 17, 2014. It featured the writing and speaking talents of Ruby Wax, Philip Gourevitch, Hooman Majd, Hari Dhillon (who posed this month’s “Tip of My Tongue” quizzers), Christopher Mason, Graham Moore, and Dan Povenmire. 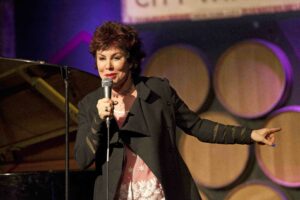 “About seven years ago, they asked me if I’d be the poster girl for mental illness,” said Ruby Wax in the opening minutes of the final House of SpeakEasy show of 2014. “I thought it would be a tiny picture… but a month later, there were huge pictures of me all over London.” Ruby, an American comedian who has achieved great success as a comedian in the UK, was in the US for the publication of her latest book, Sane New World: A User’s Guide to the Normal-Crazy Mind. “So I wrote a show,” she continued, “and toured it in mental institutions for two years. I think they liked it. The bipolars used to say, ‘I laughed, I cried…’ These people are my tribe. Because I have serious depression.”

Ruby shared a series of revelations with an enthusiastic SpeakEasy crowd. People are out of control, she said, and the critical voices in their heads are driving them to distraction. “Our thoughts are jumping, jumping, jumping, like motes on cocaine. I’m gonna find out why, if we’re at the top of the food chain, we’re driving ourselves to extinction.”

So off she went to Oxford, to study cognitive psychology. Evolution, she pointed out, sets the table with cutlery we no longer really need. These are the sort of fight-or-flight mechanisms that mean “we live with this surround-sound fear… This is what’s driving us crazy. And I don’t know why this isn’t shouted from the rooftops: you can change the wiring in your brain. Your genes hand you a deck of cards; it’s up to you how you play them.” She went on to explain neuroplasticity, the idea that the mind can be changed through different habits. “If you want satisfaction,” she concluded, “do it yourself!” 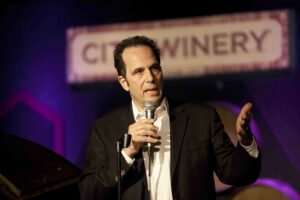 “Connecticut, New England. Which is maybe where you think abolitionists came from, but is a redneck, racist part of the country.” This is where Philip Gourevitch found himself starting a new school in 1971 or ’72. “I went out at recess, clutching my books and my recorder. (I’d been beaten up before.) I see a group of boys, including one black kid. One of the other members of the group says to him, gesturing at me, ‘He just called you a nigger.’ Another: ‘A nigger??’ A third: ‘Oh man, I don’t know if I wanna watch this.’ The black kid turned to me. ‘You called me a nigger?’ ‘No.’ ‘Well, who’re you calling a nigger?’ ‘No one.’

“His grip relaxed. Maybe he realized he was being set up. But then it took me twenty-five years to realize, so maybe he didn’t… ‘So. Are you calling me a liar?’

“There was no satisfaction, no exit, no win in that situation. It set me up for Rwanda and Abu Ghraib… where no one has an out.”

Philip would go on to write perhaps the definitive history of the Rwandan genocide, We Wish To Inform You That Tomorrow We Will Be Killed With Our Families (1998), and The Ballad of Abu Ghraib (2008). 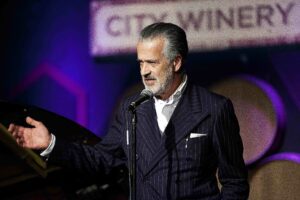 A few weeks ago, Hooman Majd was getting no satisfaction from Twitter. “It’s worse than nicotine. You try not to read the sponsored ads, but British Airways was running one that said, Take us a picture that reminds you of home and we’ll send you there. It was very presumptuous that you’d like the home you came from. Also that you’d have a home.”

The son of an Iranian diplomat, Hooman grew up abroad in the years before the 1979 revolution in Iran. “A year in San Francisco, a year in India. Then to North Africa… I went to an American school with fellow diplobrats. As a kid, no one cares your name is Hooman. But all those kids had a reference point, a home they knew was always gonna be there.”

The revolution put a stop to his planned return home. “I couldn’t go back to Iran, so I stayed in the US and immersed myself in the most American culture possible: the music business.” But Hooman always kept up with the news from home and eventually moved back for a year, with his family, in 2011 (the subject of his book The Ministry of Guidance Invites You to Not Stay: An American Family in Iran). What he realised, on his return to the States, was that “it’s not just that the cliché you can’t go home again is true — it’s that it doesn’t matter any more. The satisfaction I’ve always had as a first-generation hyphenated American is that no one cares where you’re ‘from’ because you’re American. I got no satisfaction elsewhere in the world; I found satisfaction here.”

After the break, and for the third and last time this year, SpeakEasy audiences were treated to a new song by Christopher Mason. “Bottoms Up” was a tribute to the internet-breaking star derrière of Kim Kardashian, and you can read the full lyrics here. 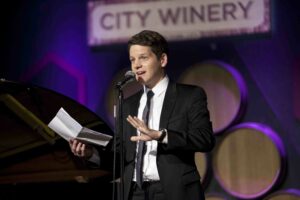 “There’s this one moment that occurs in a lot of films about scientists,” began Graham Moore. “You’ve seen it a dozen times. Our scientist delivers a brief, reasonable paragraph of technical explanation about some plot point… ‘We’re going to need the warp drive to get through the wormhole.’ I often feel my entire, exceedingly brief, career has been working against that moment.” (Graham’s work includes the screenplay for the Alan Turing biopic The Imitation Game and a Holmesian pastiche called The Sherlockian.) “These are the perils of writing about people who are smarter than you, writing about geniuses when you’re not one.”

But how to approach genius? “The best place to look for inspiration,” said Graham, “is the best fictional representation of genius, which is found in Arthur Conan Doyle.” Doyle, of course, grew to hate his most famous creation, going so far as to write his own short satire of the Sherlock Holmes canon, “How Watson Learned the Trick,” designed to piss off fans. “The point of the story,” Graham concluded, “is that it’s totally random. Doyle’s great discovery is not the accumulation of data. It’s working out what that data means. Doyle makes you go, Why didn’t I think of that?”

Graham’s career has come sort of full circle, as BBC TV’s Sherlock, Benedict Cumberbatch, plays Alan Turing in The Imitation Game. One day, on set, the actor was worrying over a technical detail about the Enigma machine in the screenplay. He explained at length, prompting Graham to fall into his own cliché: “‘Wait, Ben, say that again!’… I guess we’re all the normal-person buddy in someone else’s story of genius.” 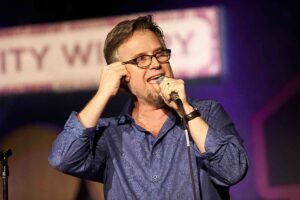 The final guest of a Seriously Entertaining first year for the House of SpeakEasy was Dan Povenmire. “There’s this equation comedians use,” he began: “Tragedy plus time equals comedy. I say, Comedy plus time equals more comedy. The longer you can delay the satisfaction of having that pay-off, the funnier it is.”

While working on Rocko’s Modern Life in the 1990s, Dan and his friend Swampy (aka Jeff Marsh) would listen to The Rocky Horror Picture Show on a loop. The third man in their working party, “a guy called Perry with a voice like gravel and a mane of curly red hair,” would complain about this… which meant that “pretty soon we’d all be doing the Time Warp again.” One time, Dan went into the office on a Sunday to do some work and realized that Perry had taped over part of Rocky Horror with the words, “This sucks, man, this fucking sucks.” Knowing Perry would be looking forward to their reactions on Monday, Dan re-recorded Rocky Horror and let it play out. Perry, confused and annoyed that his scheme had come to nothing, eventually confessed.

“What he didn’t know…” continued Dan, was that Dan had recorded the same phrase — “This sucks, man, this fucking sucks” — between two Steely Dan songs on a cassette belonging to Perry.

“So I wait,” said Dan. “I wait two and a half years. The show has ended. I haven’t seen Perry for the last year. The phone rings. ‘Oh, you fucking got me, man!’ He’d had this Dory moment from Finding Nemo, this Keyser Soze realization. I got him back by not allowing him the satisfaction of knowing that he had gotten us.”

Join us again in 2015 for more fabulous excursions into the hilarious, moving, and Seriously Entertaining unknown.